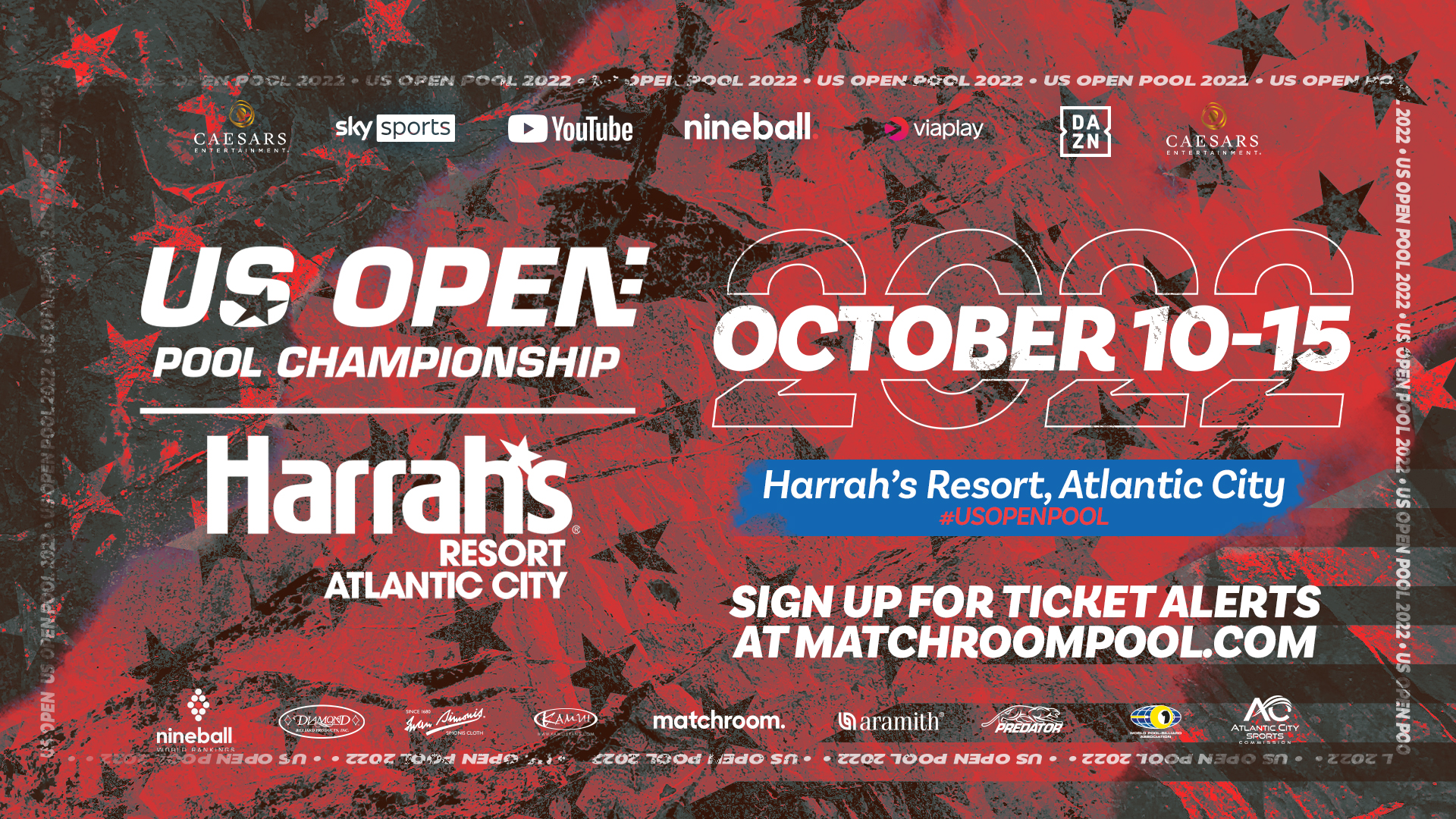 Harrah’s Resort Atlantic City will remain home to the US Open Pool Championship, the sport’s longest-running major for at least the next three years as part of an exciting new partnership with Caesars Entertainment and the Atlantic City Sports Commission, Matchroom Multi Sport is pleased to announce.

After the success of the 2021 US Open Pool Championship last September, Matchroom will return to New Jersey this October 10-15, 2022, with the event televised live on Sky Sports on October 14-15. The event will also see an exciting addition featuring a new amateur tournament that will be run by Diamond Billiards in conjunction with Matchroom at Harrah’s Resort Atlantic City.

Player entries for the 2022 US Open Pool Championship will open at 12pm ET on Tuesday, April 12, with the entry fee $750 per player for the event.

Tickets for the 2022 US Open Pool Championship start from just $15 for the day with season passes available from $86. Fans can also take advantage of our season pass with premium seating for the final day meaning a front three-row seat and priority access to the arena for only $175.

Tickets will go on priority sale to Matchroom Pool Club members on Tuesday 19, April with General Sale tickets on sale from Tuesday, April 26. Fans will also be able to take advantage of our exclusive hotel room rate at Harrah’s Resort, Atlantic City.

The amateur tournament will be situated inside the same space as the US Open Pool Championship with 7ft Diamond Tables.

Filipino Carlo Biado will head back to Harrah’s Resort Atlantic City with his eyes on defending the US Open title after defeating Aloysius Yapp in the final in dramatic circumstances from 7-3 down.

Matchroom Multi Sport Managing Director Emily Frazer said: “Since Matchroom took hold of the US Open Pool Championship in 2019, we’ve always strived towards making one of the most historic tournaments in the calendar bigger and better and this new partnership allows us to do just that. We can’t wait to be able to welcome more spectators and amateur players to the arena to play alongside our already blockbuster 256 field in the US Open where the world’s best will do battle.”

“The East Coast pool community is thriving, and I am excited to see where we can take the tournament over the coming years in here Atlantic City together with our partners at Caesars Entertainment and the Atlantic City Sports Commission.”

“The Atlantic City Sports Commission is thrilled for the return of the US Open Pool Championship. Our continued partnership with Matchroom Pool will bring the most talented billiard players to our seaside destination where our world-class venues and amenities await. We are especially keen on this year’s new amateur program that will allow local billiard enthusiasts to take their skills to new heights,” stated Atlantic City Sports Commission Director of Sports Sales, Daniel Gallagher.

“Caesars Entertainment is thrilled to host the US Open Pool Championship at Harrah’s Resort and bring this high-profile event to Atlantic City for the second year in a row,” said John Koster, Regional President for Caesars Entertainment’s Eastern Division.

“There’s no better location for this world-class sporting event – as both a spectator and a player – than The Waterfront Conference Center at Harrah’s and we are thrilled to introduce our brand of hospitality to the hundreds of visitors from all over the globe who will be traveling to Atlantic City for this event.”

Further details on the new amateur tournament ran by Diamond Billiards will follow in the coming weeks.

The US Open Pool Championship will be broadcast live on Sky Sports in the UK/Ireland, DAZN in the USA, Canada, Brazil, Spain, Italy, Germany, Austria and Switzerland. Viaplay in Scandinavia, the Baltics, Poland, Netherlands, and Belgium. Further broadcasters will be announced soon with fans also able to enjoy the action on Matchroom.Live in selected countries.