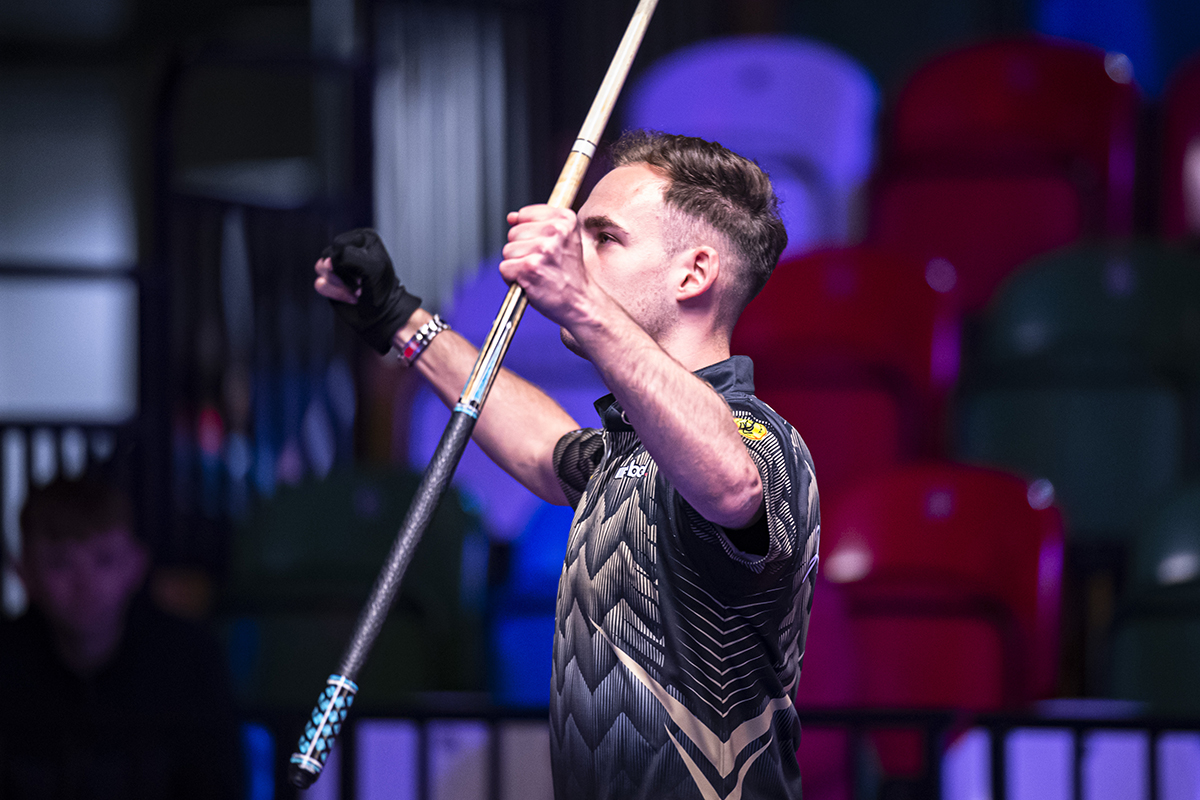 Shane Van Boening, Joshua Filler, Francisco Sanchez Ruiz, and David Alcaide will contest the semi-finals of the inaugural UK Open Pool Championship at the Copper Box Arena, London live on Sky Sports in the UK, Matchroom Pool Facebook in the USA, Canada, Spain, and Italy, Viaplay in Scandinavia, and the Baltics, as well as Matchroom.Live in selected territories tomorrow, Sunday, 22 May.

Buy your ticket for the final day for £15 here

Van Boening has found everything in his stride so far this week and that continued in the afternoon session as he overcame Marc Bijsterbosch in an 11-1 demolition job that saw the South Dakota kid go 8-0 up with two golden breaks along the way for good measure. The second time Van Boening has mastered that feat in two events. The newly crowned World Champion set up a meeting with Mosconi Cup teammate Skyler Woodward in the quarterfinals, something he knew wouldn’t come easy in his tightest match to date. The pair could not be separated at two all after Woodward made one of the shots of the tournament kicking the six into the nine to level matters.

It did seem that Van Boening was going to pull away in the eighth rack as he went 6-2 up where a freakish act saw the seven ball bounce four inches out of the pocket but soon nestle inside it to extend his lead. Van Boening was soon three away from victory after a sloppy error on the six ball from Woodward allowed his compatriot to capitalise and take full control. The 14th rack did edge in Woodward’s favour though and he trailed by four at 9-5.

Van Boening’s shot selection was exceptional as ever and a neat shot on the five meant the cue ball kissed the seven and nine to open it up for the five-time US Open champion to reach the hill. In the end, a break and run was the one-way ticket to the semi-finals Van Boening needed to beat his close friend and teammate, Woodward.

Sanchez Ruiz will do battle with Van Boening in the semi-finals after overcoming Dennis Orcollo and Daniel Maciol in the Last 16 and Quarterfinals respectively for 11-7 and 11-5. Not much separated the Spaniard from Maciol until the fifth rack where Sanchez Ruiz found his groove and form that has seen him work into Mosconi Cup contention. Maciol didn’t do too much wrong as Sanchez Ruiz started to run the racks up and build a 7-3 lead over the Pole. El Ferrari was running riot on Table 2 as he reached the hill after an hour and a half of play at 10-4 leaving Maciol with plenty to do to stay in the contest. It’s been a strong run for Maciol this week, but it was Sanchez Ruiz who did his Mosconi Cup chances no harm to wrap up a 11-4 win. His tenth match of the week after falling into the Losers Bracket after the opening match of the tournament.

Filler was in a rampant mood in the afternoon as he ran out an 11-3 winner over Imran Majid to eliminate the last remaining Brit in the competition. The German star wasn’t fazed throughout as Majid faltered in what proved to be the final nail in the 12th rack with a time foul to allow Filler to get to the hill before wrapping up his spot in the quarterfinals.

The 2022 World Pool Masters champion faced a tough test if he was to make his third semi-final in four Matchroom events this year, Aleksa Pecelj of Serbia has a burgeoning reputation in the game and he showed what minerals he had in his locker to defeat Karol Skowerski in a hill-hill finish to make a maiden quarter-final berth.

Filler’s experience in the big moments showed early on in their encounter as he soon rallied up a 5-0 lead with break and runs in four of the opening five racks, only missing out in the first after losing the lag. Pecelj though has proven on countless occasions this week, his hardy nature and he needed it to pounce on an unusual Filler mistake that left the two ball over the pocket in the sixth rack. Soon, it was 5-2. At 7-3, Filler scratched on the break to give Pecelj another bite of the cherry and he took full advantage to soon make it 7-5 after clearing up in the 11th and a break and run in the 12th. Pecelj was preying on big moments to get back into it alongside some exceptional play and he snatched his moment to make it 7-6 with a gift after Filler scratched when screwing back to make the nine. For the first time, Pecelj was back level at 7-7 and had the opportunity to make the most it when breaking in the 15th but it was Filler who went back in front. It toed and froed as both had to find their nerve. Pecelj reached the hill first and looked to be in a commanding position, but Filler came back to make it a decider.

Pecelj started out with a fluke one the one but missed a simple two ball. From there, Filler showed his winning nouse to a perfect degree playing a beautiful bank on the six before an effortless stroke on the nine to book his place in the semi-finals against Alcaide.

He had taken a 4-2 lead, but Alcaide came back to win the resulting two racks after an intense safety battle in the seventh. He soon restored his lead at 5-4 but the door was blown open again for Alcaide off the break as the two-time World Cup of Pool scratched to let the Spaniard in for 5-5. Alcaide was attempting to finally take control of the contest and he made light work of the 11th and 12th rack to do just that to build his biggest buffer to date in the match. It looked like Alcaide would put pay to He’s errors to lead 8-5 but a cut that hovered over the pocket put He back at the table and back in it at 8-6. Alcaide was looking for his run to the hill in the 16th rack at 9-6 but a double kiss on the two ball put He at the table to close the gap to two again.

A 4-9 combo from He in the 17th put Alcaide on tenterhooks as he closed in on an victory. An emphatic effort on the two ball left He hooked on the four ball which was enough for Alcaide to get in there and reach the hill. The drama wasn’t done there though as a missed carom from Alcaide on the 3 and 8 left He back at the table. He couldn’t do anything with it though and that was that as Alcaide set up a semi-final with Filler.

The final two days are available on Sky Sports in the UK and Ireland, Matchroom Pool Facebook in the USA, Canada, Spain, and Italy as well as on Viaplay in Scandinavia and the Baltics and various other broadcasters worldwide including Matchroom.Live in relevant countries. See the full where to watch list here.

Tickets for the final day are £15 using the code UKOPEN at checkout. Secure yours here