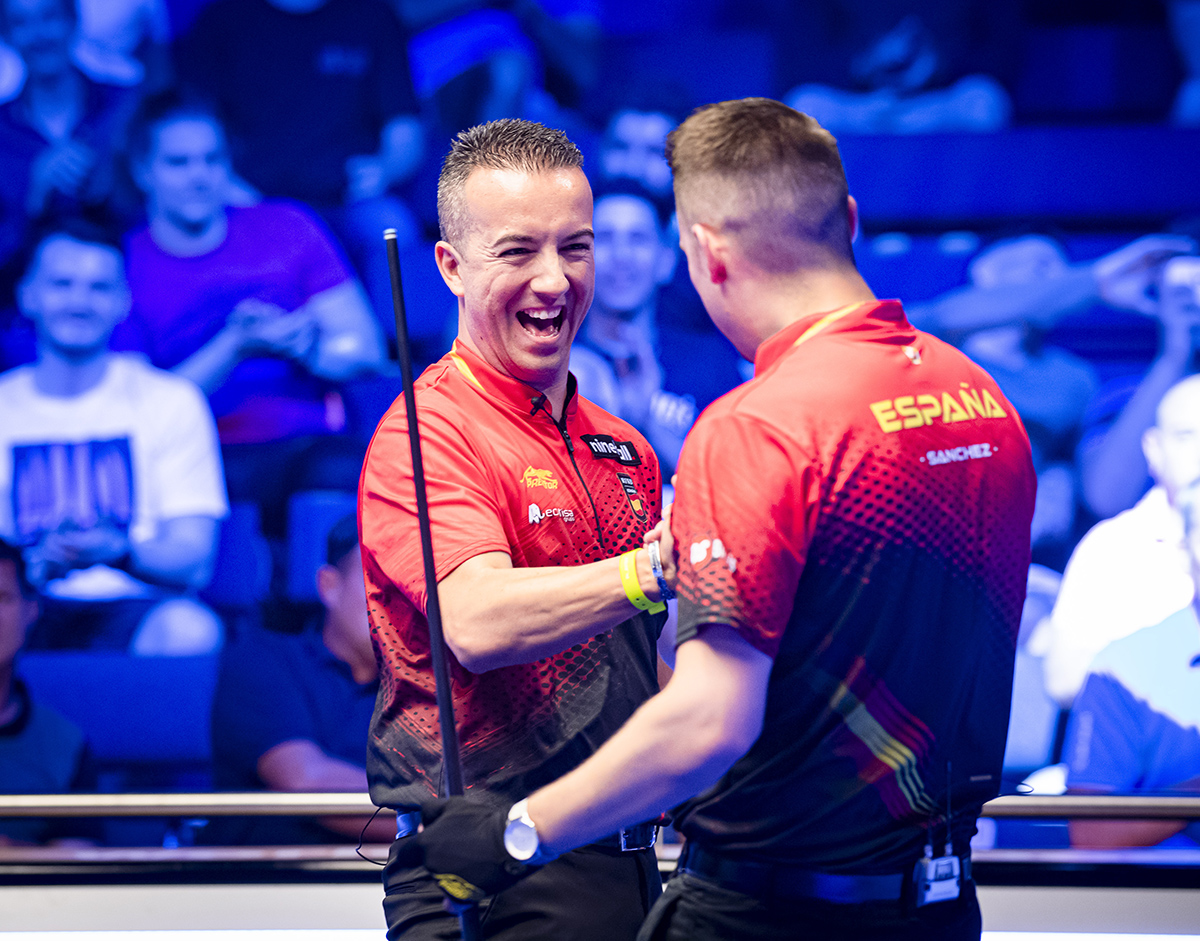 Spain and Singapore will contest the 2022 World Cup of Pool final this evening at the Brentwood Centre, Essex live on Sky Sports Arena in the UK, DAZN in the USA, Canada, Spain, Italy, Germany, Switzerland, Austria, and Viaplay in Scandinavia, the Baltics, Netherlands, and Poland. Singtel in Singapore. Matchroom.Live in territories without a broadcaster.

Spain’s David Alcaide and Francisco Sanchez Ruiz met Chinese Taipei’s Ko brothers of Pin Yi and Ping Chung for their shot of reaching the final with hopes firmly pinned on going one better than their last semi-final appearance in 2019.

Chinese Taipei got things underway winning the lag and the opening rack but it was a scrappy and cagey opener as both teams settled into the matter at hand. Into the second and Pin Yi scratched off the break to bring Spain back to the table who capitalised to be leading 2-1 after running out in rack two and a break and run in rack three. Spain had a momentum swing from there to lead 3-1 before a simple 2-9 combo asseted a 4-1 lead for the European Mosconi Cup hopefuls.

At 4-1 up, there was a moment of respite for Chinese Taipei as they left Sanchez Ruiz hooked only for him to swerve out of it and leave his opponent in amongst it. From there, it was the case of a simple run out for Spain but it wasn’t as Alcaide snatched at a six ball with only three left on the table. Pin Yi missed the resulting six only to leave it plumb over the pocket for Sanchez Ruiz and Spain had another rack at 5-1.

Chinese Taipei got their second rack on the board to cut the Spanish lead to three but only for Alcaide and Sanchez Ruiz to establish that buffer at 6-2. Into the ninth and Chinese Taipei had their chance to get something moving. Pin Yi fluked the five-ball to help Chinese Taipei to win their third rack of the day and be a difference of three again. It was a game of fine margins and a scratch on the break from Pin Yi in the next rack turned it again as Spain put their seventh rack away to be two away.

Alcaide and Sanchez Ruiz were imperious at times as they reached the hill unchallenged truly at 8-3 but Pin Yi and Ping Chung were not quite done yet after Sanchez Ruiz tried to play the five into the bottom right pocket but missed it. Ping Chung and Pin Yi needed to run racks to keep in the contest and they stood very little chance after the former scratched on the break in what proved to be the last rack as Spain wrapped up a 9-4 win.

The USA’s Shane Van Boening and Skyler Woodward were looking to replicate their efforts of 2008 and win the title but faced a stern test in Singapore’s Aloysius Yapp and Toh Lian Han.

Van Boening won the lag and broke in the first only to leave Woodward hooked to Singapore’s advantage to put them one up. A break and run from Yapp and Lian Han in the second and third put Singapore 3-0 up. It looked ominous for the USA as Singapore ran another rack to go four up.

The number four was pivotal to the next rack. Singapore had a seemingly routine runout only for Lian Han to scratch when trying to go three rails for the five after making the four. Van Boening and Woodward got on the board from there before taking advantage of Yapp missing a long pot on the one early on in the sixth rack. Woodward made the bank on the one full table before the duo wrapped it up to be two back.

A loss of concentration from Van Boening in the sixth rack saw him bank the one ball in when trying to play safe and keep the cue ball tight forcing Woodward to play a bank on the two which opened the table for Yapp and Lian Han who did the rest to go 5-2 up. A break and run from Singapore put them three away from the final, Lian Han’s break guaranteeing a shot on the one ball making all the difference.

Singapore were just not missing balls and with a further break and run in the ninth rack, the USA were staring down the barrel at 7-2 down. With five break and runs already in the bag, it looked like another for Singapore but an uncharacteristic miss on the nine ball from Yapp gave the USA a golden opportunity to pull it to 7-3.

A neat safety from Van Boening in the next rack gave the USA ball in hand which they looked to make advantage of only for Woodward to miss the eight to the bottom left pocket and allow Singapore back in to be on the hill.

In the final rack, a brief safety battle saw Lian Han hook the USA, Van Boening fouled to give Singapore ball in hand but they couldn’t make the most of it with the three tucked next to the cueball. Yapp left a tempting shot for Woodward which he buried on the three only to leave Van Boening with a tough shot on the five to keep things moving. Van Boening ended up banking and leaving a thin cut for Lian Han to all but seal victory.

Singapore did the rest to reach a maiden World Cup of Pool final.

The final gets underway ive on Sky Sports Arena from 6 pm UK time as well as live on DAZN in the USA, Canada, Spain, Italy, Germany, Switzerland, Austria, and Viaplay in Scandinavia, the Baltics, Netherlands, and Poland. See the full list of broadcasters here including Matchroom.Live if no broadcaster is available.

See the full list of broadcasters here including Matchroom.Live if no broadcaster is available.

The European Open Pool Championship is next up and takes place in Thorsten Hohmann’s hometown of Fulda, Germany at the Hotel Esperanto Fulda from August 9-14 2022 with player entries open Tuesday, 21 June, and spectator tickets available to purchase from Monday 27th June.

Sign up for alerts for the European Open Pool Championship here.