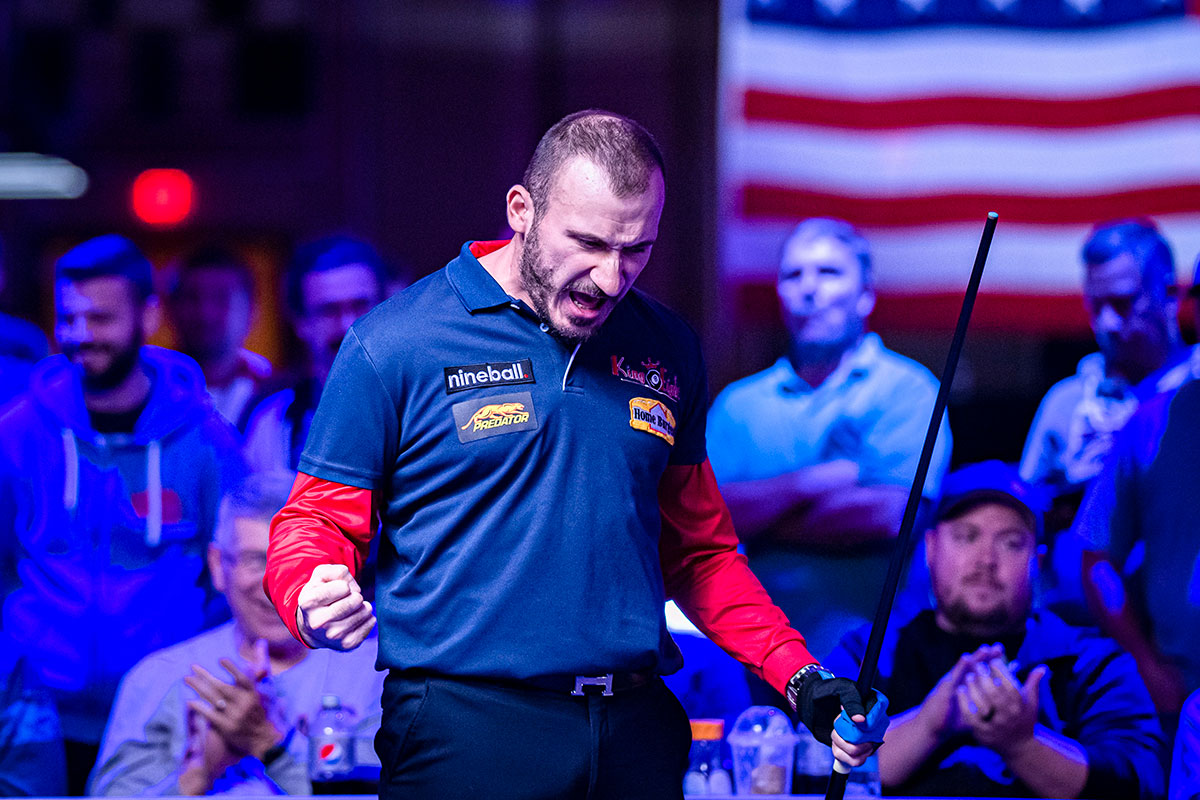 Shane Van Boening crashed out of the 2022 US Open Pool Championship in a hill-hill defeat to Alexander Kazakis as only 16 remain at Harrah’s Resort, Atlantic City ahead of the final two days of action.

Van Boening began the day on the hunt for a record-breaking sixth US Open but it was the case of the champagne being put on ice for at least another year. The World Champion came up Kazakis in full steam ahead mode as the Greek rattled up a 5-0 lead without breaking stride against the American great. Kazakis has had mixed fortune against Van Boening in recent times, defeating him in the final of the 2021 World Pool Masters in a whitewash before tasting defeat at the World Pool Championship semi-final stage back in April.

Kazakis lost his way in the middle of the match as Van Boening rallied to 5-5 and soon 7-5 to lead with an opportunity to reach the hill first. A scratch on the break for Van Boening though brought Kazakis back into it and 7-7. In the next rack, Kazakis missed the two ball and Van Boening reached the hill first.

At times, Kazakis has been doubted and questioned but today wasn’t going to be one of those days, back at the table at 8-8 breaking for the match, he was hooked when looking to make the two ball. One bank later from Kazakis and the table was clear for him to run out and secure a memorable win. For Van Boening, the wait goes on but all is not lost with the conclusion of the inaugural SVB Junior Open set to unfold tomorrow afternoon.

In the last 64, saw Jayson Shaw toppled by Lee Vann Corteza 9-2 whilst Wojciech Szewczyk downed Albin Ouschan. David Alcaide fell down to Ko Ping Chung 9-5 with one of the stories of the stage coming from Table 1 live on the Matchroom Pool Facebook where Tyler Styer staked his claim for a Mosconi Cup spot on Team USA by ending Fedor Gorst’s hopes of reaching the next round 9-7. It was a watershed showing from Styer but he faced Joshua Filler to reach the Last 16. Last year’s runner-up Aloysius Yapp was spectacularly knocked out by Sanjin Pehlivanovic 9-1.

Skyler Woodward will have mixed emotions after today after the two-time Mosconi Cup MVP fell at the hands of Chang Jung-Lin who was on a rampage at times in a 9-4 win but with results going his way, the Kentucky Kid ensured a Mosconi Cup automatic spot to avoid leaving it up to Jeremy Jones’ wild card picks. Greg Hogue was also in the Mosconi Cup reckoning for an automatic spot until defeat to Marc Bijsterbosch saw the American bow out 9-2. That news was good for Oscar Dominguez though who will return to the Mosconi Cup for the first time in five years off the Live Nineball World Rankings.

Francisco Sanchez Ruiz had a day to remember, before he even played Ralf Souquet in the Last 64, he knew he would be making his Mosconi Cup debut for Team Europe come November 30 to December 3 as the Spaniard secured the second automatic spot off the Live Nineball World Rankings due to Ouschan’s defeat to Szewczyk. On a high, Sanchez Ruiz took down Souquet and Wu Kun Lin to reach the Last 16.

Styer’s journey ended at the hands of Mosconi Cup foe Filler leaving his Mosconi Cup hopes in Jones’ hands. The American put on a gutsy display to push Filler all the way before the World Pool Masters champion pulled away to a 9-6 win.

Defending champion Carlo Biado will go again on his hunt for the crown in back-to-back years against Konrad Juszczyszyn. Biado coming through in a repeat of last year’s semi-final against Naoyuki Oi 9-6.

The Union Jack of Great Britain will be kept flying tomorrow by Chris Melling who is experiencing something of a renaissance in the Diamond Arena. Melling seeing off Joven Bustamante 9-4 before an impressive 9-1 win over Badar Alawadhi. The Magician’s match-up with Corteza will kick off the TV coverage tomorrow from 10 am ET.

TV Table (SEE BELOW WHERE TO WATCH TV TABLE)

From tomorrow, the TV table will be live on Sky Sports in the UK, DAZN in the USA, Canada, Brazil, Spain, and Italy as well as Viaplay in Scandinavia, the Baltics and Poland, and other broadcasters worldwide which can be found here including on Matchroom.Live in countries without a broadcaster.

Tickets for the final day are now sold out. Sign up for 2023 Ticket Alerts here