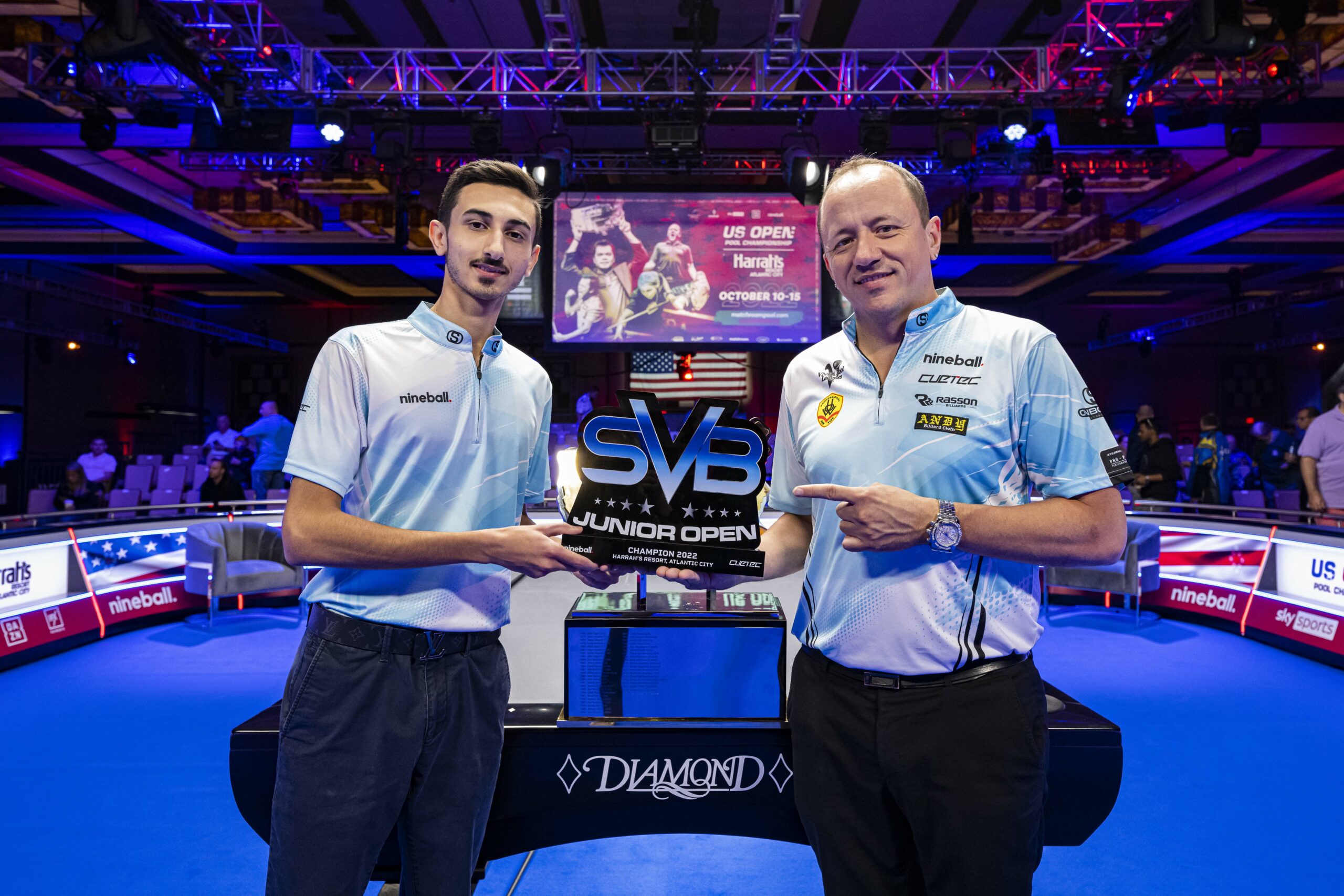 Alghamdi overcame White 9-3 in the final dropping only 14 racks across the six matches it took for the 17-year-old to claim the $2,500 first-place prize and free entry to the 2023 US Open Pool Championship and to write his name into the history books.

64 of the world’s best juniors descended on New Jersey with their own hopes of claiming victory with the likes of European double-gold medalist Yannick Pongers, Finnish sensation Riku Romppanen, rising USA stars Joey Tate, Savannah Easton and White all looking to take away the top prize.

Over the two days of action, juniors as young as Lyno Liu aged seven played in front of the same audience as the US Open scaring the current crop into what they’re going to come up against in years to come.

Alghamdi of Saudi Arabia had a run to the last 32 at the inaugural European Open back in August and it was clear he would be one to watch in AC and he was delighted with his performance: “It feels great. I am so happy to win the first-ever SVB Junior Open title. Shane is my idol when I started to play pool in 2015. It’s fun to see Shane and he’s taught me a lot in that time. It feels so good to play next to the champions. This is my last year as a junior, I am coming for them. I think I am ready to make the step up. I hope to learn more. My whole family, my mother, my father, my friends, and the federation were all watching. It was had. I can’t wait to play next year’s US Open Pool Championship.”

Zach DiMotta, President of Imperial said: “It was amazing to be a part of and see Matchroom put on its first junior event. I think that you couldn’t have asked for more out of this partnership with Shane Van Boening. There are few times that you get to witness the world’s complete junior Nineball talent in one arena and that is what all the fans got to witness. I cannot wait to see what the future holds for this event.”
Emily Frazer, Matchroom Multi Sport Managing Director added: “The SVB Junior Open was a remarkable event with a showcase of such talent amongst players from 7-years through to 17. It was great to work so closely with World Champion Shane Van Boening to turn his dream into a reality of inspiring the next generation of professional pool players. This is the first of many Junior Opens as we continue to grow the Nineball game over the coming years; it is all well and good creating a tour but there must be a next generation who are inspired to pick up their cue and earn a living through our Nineball World Rankings system. Not only was it fantastic to see such a diverse field of ages, genders, and nationalities, but it was also fantastic to see so much support from our professionals who were at the business end of the US Open during the competition. I cannot wait to see what the next one brings.”

Juniors were competing for a slice of the $10,000 prize fund with the field extended from 32 to 64 players due to demand. Van Boening’s official cue partner, Cuetec put up $5,000 alongside $5,000 from Matchroom to offer one of the most exciting prize pots in Junior Pool. All Juniors received an SVB Junior Open jersey free of charge from official apparel partner Onboard.

The tournament was played on Diamond Tables, with Simonis Shark Grey 860 cloth, Aramith Tournament Black balls, and KAMUI chalk in the same Diamond Arena as the US Open Pool Championship which took place from October 10-15.

MATCHROOM POOL REACHES ONE MILLION FOLLOWERS WITH GROWTH OFF CHARTS