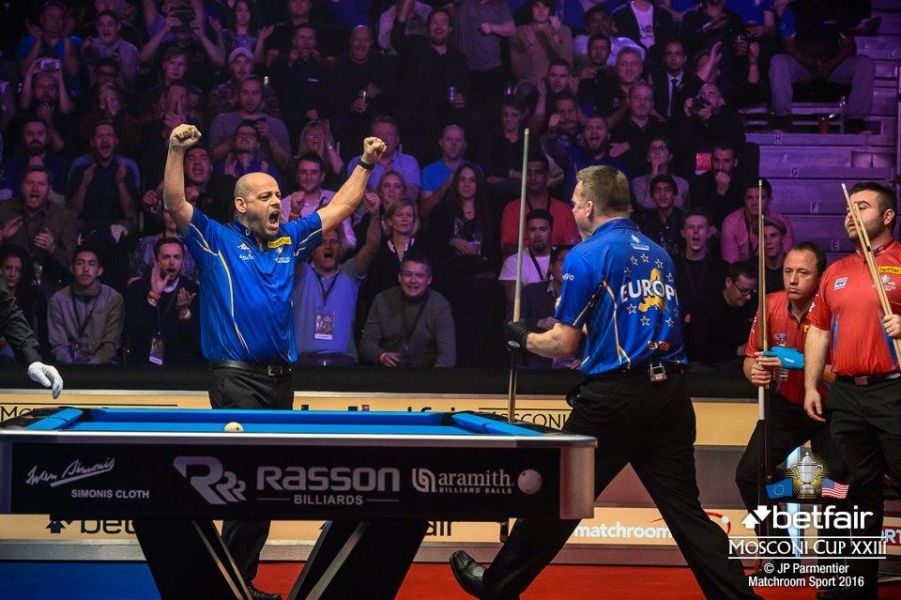 TEAM AMERICA lives to fight another day at the Alexandra Palace as the pairing of Rodney Morris and Justin Bergman won the final match of the evening in the final rack to stall European celebrations at the 2016 Betfair Mosconi Cup. With the Europeans leading 7-2 going into the final session, they need to win all four of the evening matches to reach the required 11 points to retain the Mosconi Cup for the sixth time.

“We can smell the Cup!” said Euro captain Marcus Chamat.

“It is really hard to win every match but we were close. We have Jayson first tomorrow and then Niels so we have a good line-up for the first two tomorrow.

“I wanted Jayson and Albin to play together because I think they are going to be on the team for many years to come, they are the future of the European team. Jayson wants this so much. He has been watching Mosconi Cup since he was small and this is a dream come true for him to be here and tomorrow he is first up so he can go and finish this up. It would be a perfect end to an amazing year for Jayson to win it tomorrow.”

The Betfair Mosconi Cup is the annual Europe v USA 9 ball showdown. It runs from Tuesday 6th to Friday 9th December with all sessions getting underway at 18.30 GMT. There are a potential 21 singles and doubles matches with the first team to reach 11 carrying off the famous trophy.

Darren Appleton and Niels Feijen won the opening game of the session as they defeated Shane Van Boening and Mike Dechaine 5-2. Van Boening is enduring a miserable time in London having failed to have won a point from five matches and looked all at sea this evening.

Albin Ouschan secured two points for the Europeans as he won his doubles match with Jayson Shaw and then defeated Skyler Woodward in the singles. Neither match was of high quality as all the players felt the pressure but when Ouschan won a final rack decider against Woodward, it put Europe on the hill.

“That was a huge match and it felt almost like the last match from last year; I played Skyler in singles and it went to 5-4. I didn’t feel really comfortable in the beginning, I made a couple of mistakes and was unlucky with the break at the beginning, but I was fighting and stayed focused and it was a happy ending for me, said Ouschan.

The final match was a thriller as each team rode their luck in a pressure cooker environment but it was Rodney Morris and Justin Bergman who denied Darren Appleton and Mark Gray the chance to pot the winning 9 ball.

Morris said, “We are fighting hard and Justin played unbelievable. We need to try and hold our nerve because it is crunch time but little victories, we are trying to win each match and get momentum and have some energy for our team.

“We will worry about winning the lag and getting the advantage, but if you win one it can bring two and you never know – Donald Trump is going to be US president so we know anything can happen!

“They brought me in for the experience and I will not let these guys get down because that is not what we are about. We are about team unity and as much as people say we are not united we are all pulling for each other and if I dog it, I know my team-mates feel it.”

Play continues to a conclusion tomorrow.

The live stream is available from www.matchroompool.com