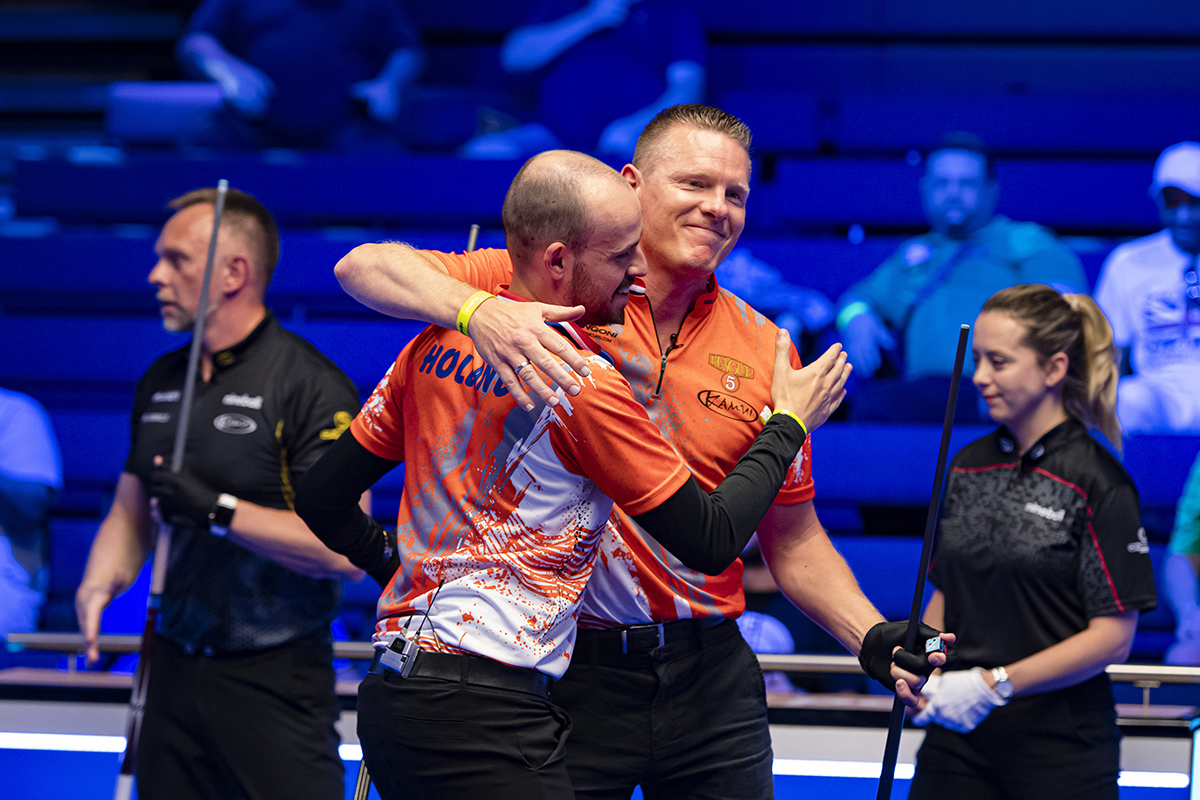 Chinese Taipei, Singapore and the Netherlands have all reached the quarterfinals of the 2022 World Cup of Pool at the Brentwood Centre, Essex live on Sky Sports Arena in the UK, DAZN in the USA, Canada, Spain, Italy, Germany, Switzerland, Austria, and Viaplay in Scandinavia, the Baltics, Netherlands, and Poland. Matchroom.Live in territories without a broadcaster.

Chinese Taipei’s Ko brothers, Pin Yi and Ping Chung became the third side in the quarterfinals after they put in a ballsy display to defeat a determined Greek side led by Alexander Kazakis and Nikos Ekonomopoulos in a hill-hill finish.

The early running came from Chinese Taipei who took the opening three racks. Pin Yi and Ping Chung had lost the lag but were soon at the table with the rack concluding with a battle on the nine. Greece missed it but left it safe, Pin Yi then played an expert safety to take the cue ball down the table, Kazakis then missed the bank and Ping Chung finished it for Chinese Taipei to lead 1-0. Two quick racks later, Greece were down and cold at the break despite the sweltering conditions in England.

Kazakis and Ekonomopoulos wanted their say on matters though and they took their first rack off Pin Yi and Ping Chung in the fourth. The break wasn’t great from Chinese Taipei and with Greece back at the table, Kazakis fluked the two whilst trying to play a cross-bank. A run out later and Greece were back in. Ekonomopoulos was showing his Mosconi Cup form of old laying a hook that Pin Yi couldn’t get out of, fouling for Greece to have ball in hand to be one back. It was Ekonomopoulos at the heart of the sixth rack as Greece levelled after another expert safety caused the table to open from Pin Yi’s efforts.

Pin Yi was seemingly struggling, and he scratched when jumping for the four ball to give Greece the table and inevitably the seventh rack to lead for the first time. In the ninth rack, Greece were 5-3 up when Ekonomopoulos left the three in the jaws, it was an opportunity that Chinese Taipei desperately needed to come back in at 5-4. Ping Chung’s break in the tenth rack was pinpoint and it provided what was seemingly an easy table. A miss on the six brought Greece back to the table but Kazakis couldn’t do enough with the cue ball allowing Chinese Taipei back in to go level at 5-5.

Ping Chung was cueing well and a nice safety on the three put Greece back in troubled waters only for them to steer out of it well thanks to Ekonomopoulos before running out to be on the hill first. The Greeks were three balls away from the quarterfinals but with the six glued to the eight, Ekonomopoulos missed the six and from there a decider was in the offering.

In the deciding rack, Kazakis had to jump to make the two, he made the two, but the cue ball proceeded to keep pace and roll down into the bottom right pocket. A sickening blow for Greece in a gutsy showing, Ping Chung, and Pin Yi from there completed a dramatic comeback and victory, 7-6 to reach the quarterfinals.

The opening four racks between Kuwait (Omar Al-Shaheen and Bader Al Awadhi) and Singapore (Aloysius Yapp and Toh Lian Han) were shared after the latter had taken an initial two rack lead. Kuwait came back thanks to errors from Yapp and Lian Han. Lian Han missed the six in the fourth rack when presented with a golden opportunity to make it 3-1 after Al-Shaheen had scratched earlier on in the rack.

Singapore was scrapping at times to keep any hold on the game as Kuwait came through strong to come from behind at 5-4. Al Awadhi missed the five ball with the chance to put Kuwait on the hill and Singapore came back into it to win the resulting two racks to get to the hill first.

Yapp scratched on the break with Singapore on the hill and it looked all but certain that Kuwait would force the second hill hill of the day only for Al-Shaheen to miss the vital nine ball. It was still a testing effort for Lian Han who was jacked up. The nine rattled both sides of the pocket but stayed out but the ball was still safe, and Kuwait were still alive but forced to play a dangerous safety. With Al Awadhi under time pressure, he was forced to play a shot that left the nine in the centre of the table and the cue ball at the top.

It was Yapp who missed the corresponding nine for Al-Shaheen to force a decider at the second time of asking. Into the final rack, Al Awadhi scratched whilst trying to make the three-ball and from there Singapore got back to the table to complete the win.

Defending champions Germany (Joshua Filler and Thorsten Hohmann) met the Netherlands’ Niels Feijen and Marc Bijsterbosch in the final action of the afternoon in a battle that has been seen in so many sports over the years. After winning the lag, the Netherlands looked to have built ahead of steam if it wasn’t for Bijsterbosch missing the nine and scratching to hand their counterparts an early rack.

Feijen and Bijsterbosch were soon level though after an uncharacteristic loss of the cue ball with three left on the table from Filler helped the Dutch along their way. The next rack saw Feijen break before Bijsterbosch missed the two, it was a quick rack for Germany then to lead 2-1. Germany had a long wait for their contest after last playing on Tuesday and it seemed they were caught cold by the Netherlands’ fight back as they whistled their way into a 5-3 lead.

The break from Feijen is renowned and it was coming in clutch every time to provide a springboard for the Dutch resolve but that was broken in the ninth rack. Germany got back to the table and Hohmann meant business as he executed a pinpoint jump shot on the one to aid the German return at 5-4.

Feijen is a two-time runner-up at the World Cup and he will be hoping to rewrite the stories of old in this competition with Bijsterbosch this week as the pair wrapped up an impressive 7-4 win.

Action returns from 5 pm with Round 2 continuing live on Sky Sports Arena as well as live on DAZN in the USA, Canada, Spain, Italy, Germany, Switzerland, Austria, and Viaplay in Scandinavia, the Baltics, Netherlands, and Poland. See the full list of broadcasters here including Matchroom.Live if no broadcaster is available.

SPAIN AND USA REACH QUARTER-FINALS OF WORLD CUP OF POOL