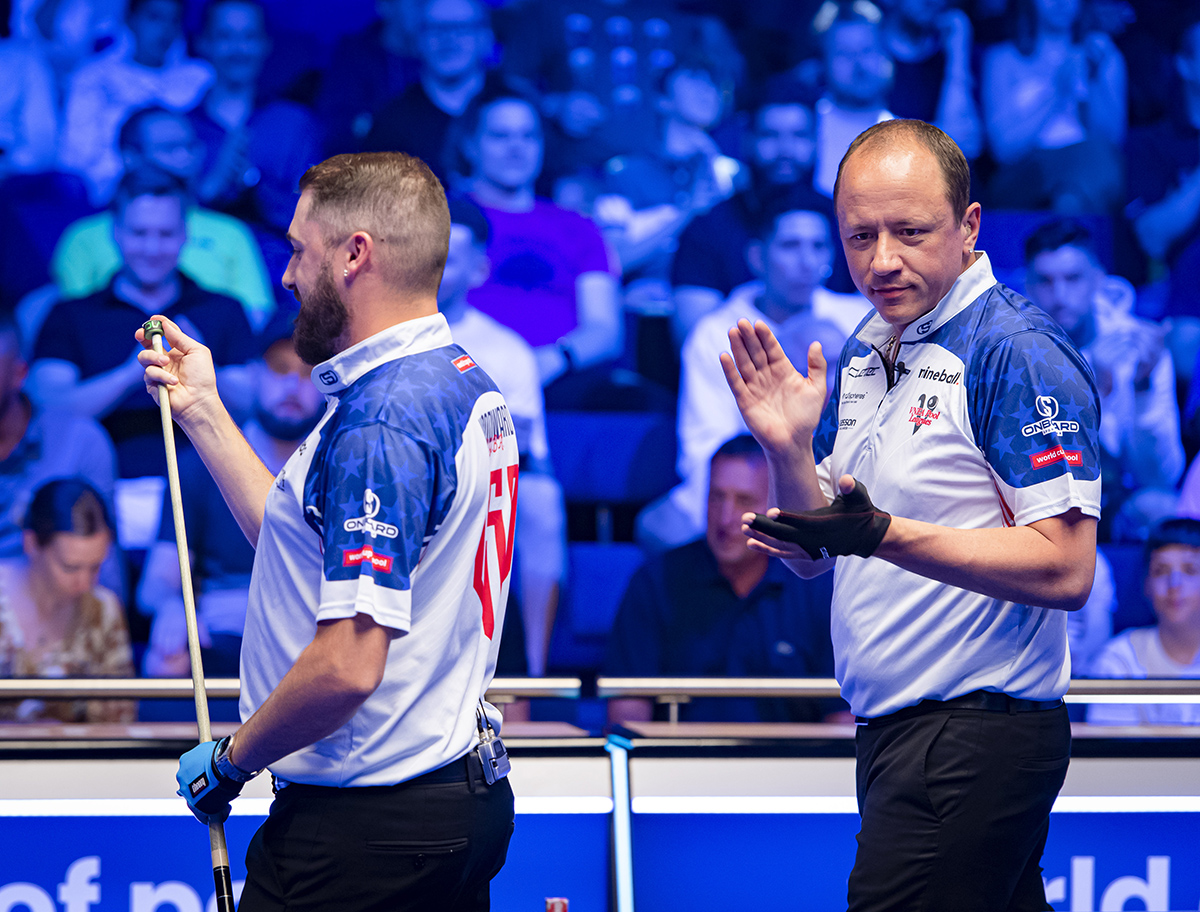 The USA and Spain knocked out Switzerland and Great Britain respectively to reach the semi-finals of the 2022 World Cup of Pool at the Brentwood Centre, Essex live on Sky Sports Arena in the UK, DAZN in the USA, Canada, Spain, Italy, Germany, Switzerland, Austria, and Viaplay in Scandinavia, the Baltics, Netherlands, and Poland. Matchroom.Live in territories without a broadcaster.

The USA won the lag and Van Boening broke in the first only to be left with no shot on the one. The push-out was played before a brief safety battle ensued that the USA got on top of. Van Boening played the cue ball in behind the five only for it to be pushed up table and in striking distance for Regli who cooly dispatched it and the eventual nine to lead 1-0. A break and run from the Swiss in the next rack put them two up.

Regli broke in the third but left Jungo jacked up to make the one. He rattled the pocket and the USA came to the table to get their first rack on the board. Van Boening and Woodward kept their opponents in the chair to level with a break and run in the fourth.

Van Boening’s break wasn’t helpful for Woodward as he was left hooked on the one ball which halted the USA momentum and brought Switzerland back to the table only for Regli to scratch on the one after some safety. The USA had the lead for the first time after five racks. A break and run in the sixth extended the USA’s lead to 4-2.

At 5-2 up, the USA seemed to be holding all the aces in the rack with Switzerland hooked on all angles only for Jungo to play the deliberate foul and make the USA ponder their next move. With the four tied up, Regli kicked it out of trouble and in the process opened it up for a Van Boening shot. Van Boening’s cut was missed and he scratched. With the cue ball in hand, Switzerland made it through to the eight before an error only for Woodward to also not make it safe. Eventually, Switzerland took it and it was 5-3.

The next rack was quick but beautiful, Woodward jumped to make a 1-9 combo worthy of being shot of the tournament. Woodward’s magic in the previous rack was the polar opposite to his next time at the table in the next shot as missed the four ball from distance to open the table up for Switzerland to be back in reach at 6-4.

Van Boening and Woodward were soon two away from victory, Jungo scratched when trying to bank the five ball after an unfortunate double kiss followed by the cue ball hitting the seven and five to roll into the bottom pocket and the USA did the damage.

The USA reached the hill in the following rack despite breaking dry. Jungo left the one open in a congested table and Van Boening and Woodward did the rest to be one away from the semis. A battle ensued on the two for sometime in the following rack where eventually Switzerland came out on top to get back in it at 8-5.

Jungo was having a game of it and he scratched off the break as the USA completed a 9-5 victory to meet Singapore in the semi-finals.

The long-awaited last quarter-final saw home favourites Great Britain (Chris Melling and Imran Majid) meet one of the tournament favourites in Spain’s David Alcaide and Francisco Sanchez Ruiz. The two teams shared the early spoils going into the third rack where a costly miss from Majid on the one gave Spain the initiative to take the lead at the commercials.

A brief safety battle in the next rack saw Great Britain with a chance at the table only for the Spaniards to hook the Brits well and truly causing Melling to foul and give Spain ball in hand to go 3-1 up. Alcaide scratched on the break in the next rack and Great Britain were only one back. Into the next rack and Sanchez Ruiz played an expert bank on the two ball the length of the table before being left of a clear potting angle on the four causing him to jump and keep the table open. Majid couldn’t make the most of it with his own bank on the six though and Spain led 4-2.

Great Britain had their chances but in truth, Spain were in an imperious mood as they rattled in two further racks to be leading at 6-2 and only three away from the finish line. The ninth rack was more of the same for Spain as they continued to fire on all cylinders with a 2-8 combo in another break and run.

The hopes of Melling and Majid were firmly in Sanchez Ruiz and Alcaide’s hands as the two continued to batten down the hatches on any fight back with solid positional play and no errors. Melling did have a shot on the two in the tenth rack but he caught the seven and that was the end of that for Spain to be on the hill. One final break and run wrapped up a special performance from Spain to face Chinese Taipei tomorrow morning.

Action returns from 11 am in the morning with the semi-finals live on Sky Sports Arena as well as live on DAZN in the USA, Canada, Spain, Italy, Germany, Switzerland, Austria, and Viaplay in Scandinavia, the Baltics, Netherlands, and Poland. See the full list of broadcasters here including Matchroom.Live if no broadcaster is available.

See the full list of broadcasters here including Matchroom.Live if no broadcaster is available.