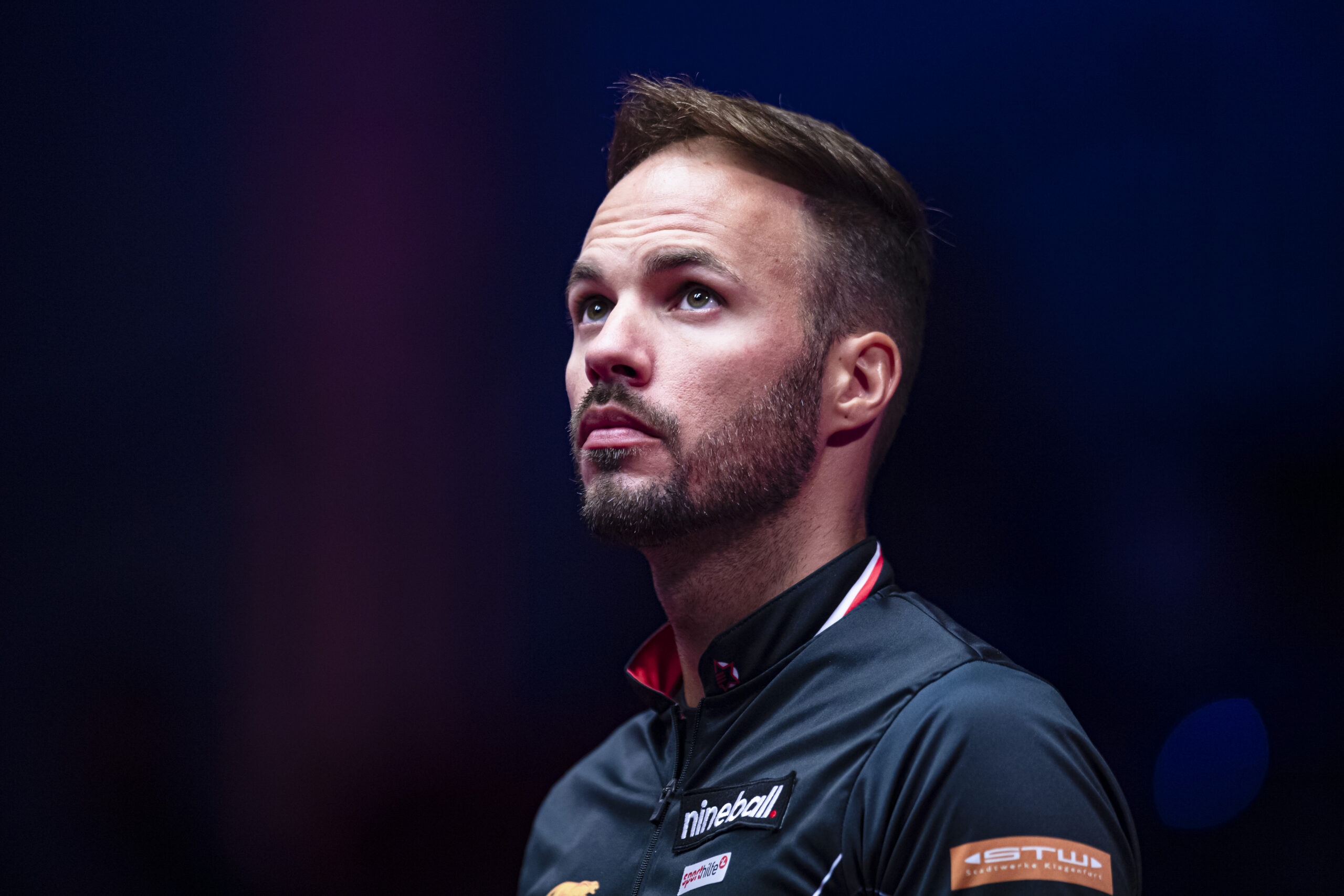 Albin Ouschan and Shane Van Boening will contest the inaugural European Open Pool Championship final in a repeat of the 2022 World Pool Championship final for the $30,000 first place prize at Hotel Esperanto, Fulda in Germany live on  Sky Sports in the UK and Ireland, DAZN in the USA, Canada, Germany, Austria, Spain, Italy, and Switzerland as well as on Viaplay in Scandinavia, Poland, and the Baltics and various other broadcasters worldwide including Matchroom.Live in relevant countries.

Ouschan was looking to reach another Matchroom final on his birthday whilst his opponent and close friend Mario He was making his first semi-final appearance. Ouschan won the lag and came up dry in the first rack to allow He in to take the initial lead. A dry break from He in the following rack wasn’t enough for Ouschan to get on the board just yet as He made it 2-0 after a brief safety battle. On his birthday, Ouschan was being left no presents be He who soon rose up to a 4-0 lead with the first break and run of the match in the fourth rack.

At 5-3, He missed the two leaving it over the pocket for Ouschan only for the two-time World Champion to scratch when screwing back for position on the three to put He back at the table to establish a three rack buffer aided by an expert double kiss on the four ball to loosen it free of the eight. At 6-3 up, it was He’s turn to scratch in the middle pocket when coming back for position on the eight, it was a gift that Ouschan needed to get back in at 6-4.

Ouschan was struggling on the break but got it going in the 11th to be one away thanks to a break and run as he crunched the balls. The Austrian duo know each other’s game better than most around thanks to their winning World Cup of Pool partnership and it was He taking the upper hand making four balls on the break in the 13th rack to establish a three rack lead again at 8-5 with Ouschan faltering on a 1-8 combo to open the table up.

In the following rack, He made his own error overcooking the cue ball when trying to tuck it safe at the opposite end of the table. Ouschan from there had a routine run out to get the break back. The break was becoming easy for Ouschan but it came to his downfall in the 15th rack as the 9-ball looked destined to go in off the break after being kicked by the two only for it to hang over the pocket and leave He and easy combination to be two away.

Ouschan was pinpoint in his quarter-final win over Konrad Juszczyszyn but it wasn’t so true in this encounter as he missed the five ball to leave what seemed to be a routine runout for He only for the Panda to lose position moving from the seven to eight. He opted to cut it only to miss it and leave Ouschan an easy eight and nine ball to be back in it.

The contest ebbed and flowed but ultimately it was He edging it at 9-8 as the closing racks approached. Ouschan left a golden chance for He to get to the hill after breaking but it was the latter who scratched to allow Ouschan in to reach the hill first and lead for the first time. In the final rack, Ouschan broke dry but He pushed out left the man who had led for the most part back at the table only to leave Ouschan in the prime position to complete a nervy victory with four racks in a row.

World Champion Shane Van Boening met with rising Spanish star Jose Alberto Delgado and it was the former who looked to have control of the opening rack after a dry break from Delgado. The dry break wasn’t the whole story of the opener though as Van Boening misjudged his route on the five to miss it and hand Delgado an easy table to lead 1-0.

It was a nervy opening affair as they shared the opening four. Into the fifth and Delgado played a brilliant kick behind the one but totally messed up the table speed on the two to leave it hanging in the jaws to bring SVB back to the table to lead at 3-2 and soon 4-2. In the seventh, Van Boening scratched off the break to allow Delgado back to the table and it looked like he’d close the deficit again only to scratch himself with the nine left.

Van Boening’s break was causing a whole heap of problems for the American great and he scratched again at 5-2 up. Delgado pulled another back to 5-3. At 6-3 up, Van Boening scratched on the break again and from there Delgado got another on the board at 6-4, it was the case of the five-time US Open champion being his own worst enemy.

Despite his issues on the break, Van Boening has been in this situation far more often than most and Delgado was hooked on the break to leave his opponent in the optimum position to lead 7-4. Delgado stole another rack at 7-5 to be right behind the USA man.

The new break box was causing both players and at 9-5, Van Boening scratched for the fourth time much to his despair as Delgado got within three again. Delgado made three balls on the next break but he couldn’t close the table out meaning Van Boening got to the hill at 10-6. It was brought back alive after another scratch from Van Boening gave Delgado another rack. Breaking at 10-7, Delgado left on a 1-9 combo to narrow the gap to two again.

In the end, Van Boening did see it out 11-8 in the end thanks to another dry break from Delgado to meet Ouschan in the first-ever European Open Pool Championship final.

Sunday, action is available on Sky Sports in the UK and Ireland, DAZN in the USA, Canada, Germany, Austria, Spain, Italy, and Switzerland as well as on Viaplay in Scandinavia, Poland, and the Baltics and various other broadcasters worldwide including Matchroom.Live in relevant countries. See the full where to watch list here.