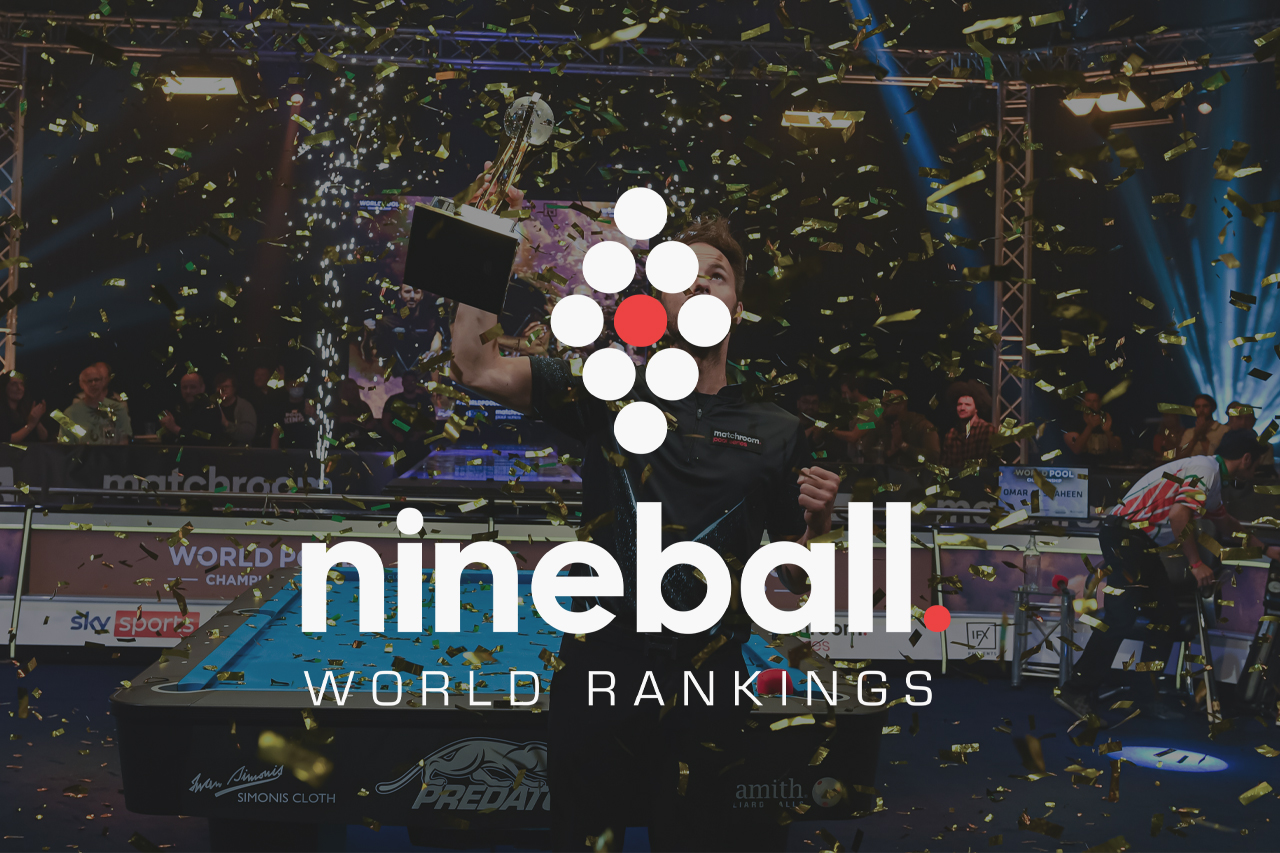 The Matchroom Nineball World Rankings will promote clear, fair, and concise rules to develop the professional aspect of the sport across the world and will:

Matchroom’s recent expansion into Open fielded Nineball events is with the aim to increase participation numbers on the professional side of the sport and across the world, with further additions to the roster: US Open, UK Open, and the European Open. Field sizes of 256 players, guaranteed prize money, and now a seeding structure, as well as ranking points earnt, strengthens Matchroom’s commitment to the sport of Pool.

Matchroom President Barry Hearn said: “We are going to make Pool a major global sport and together we’re going to show what can be achieved and what dreams can be created for the players all around the world already playing this wonderful game.”

“For the first time, you have a major global company looking after players and making sure the opportunities are second to none. Get involved either as player or fan. We need everyone to pull in the same direction and under Matchroom’s leadership Nineball Pool will shock the world over the next few years.”

“The game needs to make that quantum leap into the big time and Matchroom are ready to take it there in 2022. This is going to be electric.”

From January 2022, the Matchroom Nineball World Rankings will:

Matchroom Multi Sport Managing Director Emily Frazer explained: “Finally players have a clear and transparent entry system to the biggest staged events in the world. With the support of the WPA, the Nineball world rankings is the perfect opportunity to bring together the whole pool community. It is time we create structure and organisation in this sport.”

“This announcement of structure is exactly what the sport of pool has needed to push forwards and commercialise. Now there will be a clear structure on our website, that will be detailing our schedule of events, how you qualify, how you earn ranking points, and when the cut-off is. Tournament seedings is a key part of the Nineball world Rankings; an advantage and benefit to the players tis to be ranked in events on order of merit.”

“In the last couple of years, we have gone from three events to eight in 2022. It was vital and integral to the sport of pool for us to bring the pool community together and to work with other event organisers as part of our Nineball World Rankings. Thanks to the likes of Diamond Billiards for the Derby City Classic. Pat Fleming for the International Open. EPBF President Gre Leenders for the EuroTour to create a bigger ranking system for our players.”

“In 2022, we are bringing you a total of $1.7million of prize money. What a journey we are on and what a journey we are starting. This announcement of the Nineball World Rankings is exactly what pool has needed to turn this into a global recognised sport. This is the motivation that every single person that loves this game just as much as we do to pick up a cue and start playing. This is time for everyone in the community to come together and professionalise this sport.”

From December 2022, the Matchroom Nineball World Rankings will:

Ranking status will be awarded by prize money and therefore events will be categorised into the below tiers, this will establish a clear Tour for the players to participate in:

The Matchroom Nineball World Rankings are open to any tournament recognised by Matchroom and given the approval of Matchroom and sanction of the WPA. To be a part of the rankings, tournament organisers must follow the overall standards set out by the Matchroom Nineball World Rankings to raise the profile of the sport. Whilst this will be flexible for 2022, the aim will be to standardise the professional rules of the game of Nineball producing fairness for players throughout all organised events as well as generating an easy understanding of the game: increasing awareness across the globe.

The 2022 Matchroom Nineball schedule will begin with the Diamond City Classic 9-Ball on January 26 promoted by Diamond Billiards before Matchroom’s first-ever Premier League Pool at the Morningside Arena, Leicester in England from Sunday, February 13 to Sunday, February 20.

The full 2022 Matchroom Nineball Schedule can be found in full here.