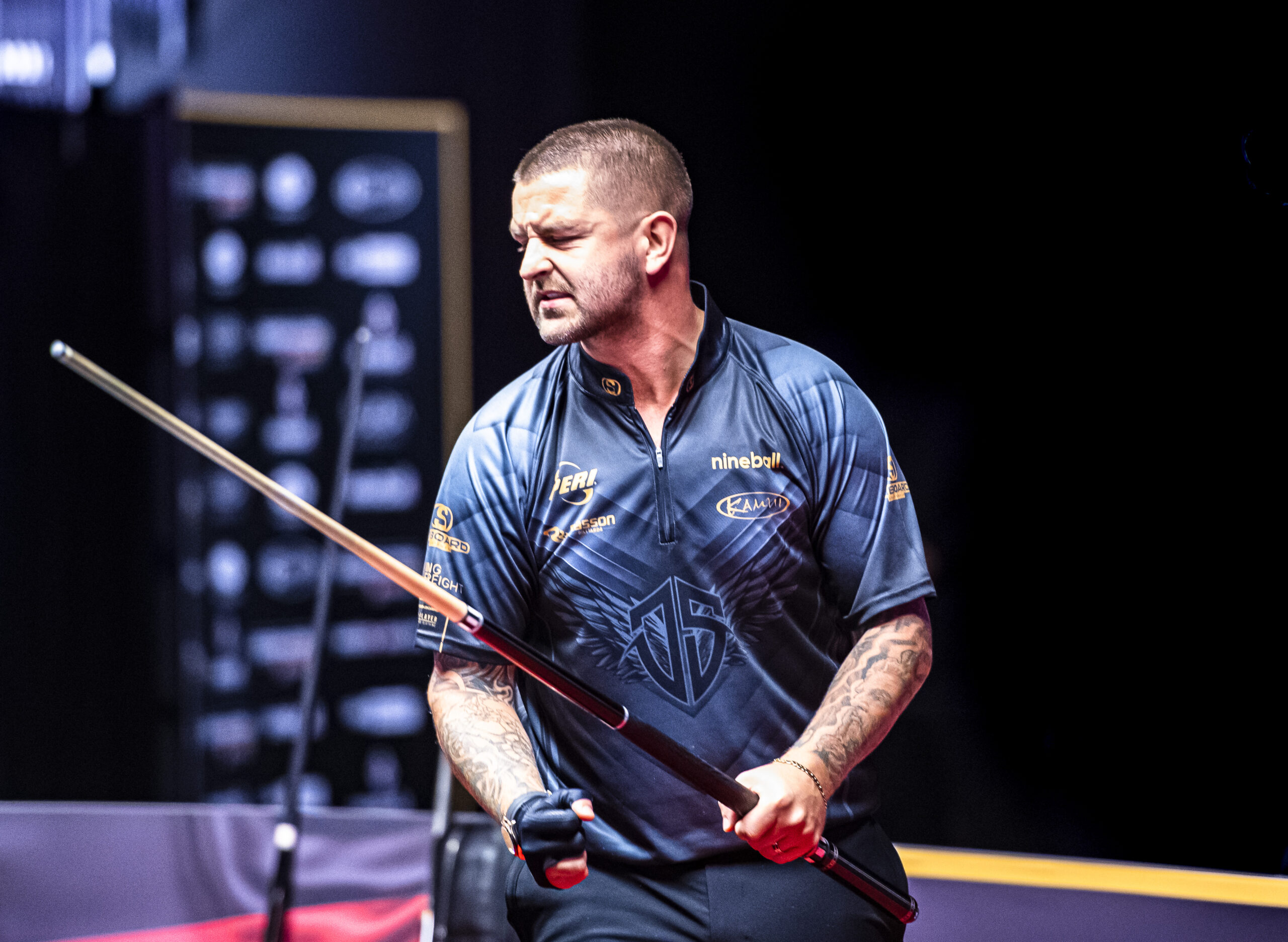 Joshua Filler passed the test of Mosconi Cup teammate Eklent Kaçi and the USA’s Oscar Dominguez to reach the Last 16 of the inaugural European Open Pool Championship at Hotel Esperanto, Fulda, Germany live on the Matchroom Pool Facebook/YouTube and Matchroom.Live.

Filler had a good day of it coming from behind to defeat Kaçi 9-8 when his goose had looked cooked when Kaçi had a 5-9 combo to seal victory at 8-7 only for the Albanian to offer the gift that the Killer needed to get back into it. Kaçi didn’t get a look in from then on as Filler broke in the final rack but it was far from easy with the 7, 8 and 9 all glued together and the rack penned underneath it. Filler kept his cool in the moment though despite the glaring problem to complete victory and set up a Last 32 tie with Oscar Dominguez of the USA.

Dominguez had came from 4-1 down against Tyler Styer to peg him back at 5-5 and 6-6 before pulling through to meet his old Mosconi Cup rival to reach the Last 16.

Filler came into the contest on the back of two hill-hill showings in his last three matches in the tournament and he was in no mood for a similar scenario. Filler hit the front early on but Dominguez was playing freely and causing the German a whole heap of problems. The home crowd were out for their star man and he delivered a 10-7 victory to book his spot in the Last 16 in what proved to be a successful day that also saw him become the first player on Team Europe for the 2022 Mosconi Cup off the Live Nineball World Rankings.

Francisco Sanchez Ruiz was the only player who could beat Filler to the first Mosconi Cup spot with $14,000 separating the pair heading into the tournament but his hopes were ended in the Last 32 at the hands of Albania’s Besar Spahiu who mounted an impressive comeback to steal it 10-8 and confirm Filler’s spot on Team Europe for the 2022 Mosconi Cup at Bally’s Las Vegas from November 30 to December 3.

Jayson Shaw is next up for Filler after the two-time Mosconi Cup MVP saw off Petri Makkonen earlier on in the day before a grueling battle with Italy’s Daniele Corrieri to book his place in the Last 16. Corrieri took the game to Shaw and had the better of the opening exchanges with a 1-9 combo the pick of the bunch as he found his rhythm early doors with Shaw not doing too much wrong.

Eagle Eye found his mojo at the midway stage and he didn’t do too much wrong from then on as he led for the first time in the match at 7-6. Shaw from there was imperious as he set up a mouthwatering clash on Table 1 with Filler next.

Team USA’s charge for glory on home soil will be led by Nineball World No.1 Shane Van Boening who came through his own tests against Germany’s Sebastian Staab in the Last 64 before Wojciech Szewczyk stood in his way of a weekend appearance. Szewczyk took the early initiative to lead 2-0 before Van Boening pulled back to 2-2. The pair were entertaining the crowd with some of the best safety play witnessed all week as Van Boening came back to lead only for Szewczyk to soon lead 5-4 and be at the halfway point. Van Boening was dominant to lead 9-5 only to break dry in the next and Szewczyk to bite back. The Pole was struggling for position on the 1 ball. and had to play safe and from there Van Boening played a kick and stick that would rival any in history to leave Szewczyk in knots. A short safety battled ensued for Van Boening to come on top and meet Sanjin Pehlivanovic in the Last 16 tomorrow.

Alexander Kazakis defeated David Alcaide 9-2 to reach the Last 32 and meet John Morra. The Greek had a battle on his hands against Morra who lead at various points and most importantly was 8-6 up in the Race to 10. The Canadian looked to have control but Kazakis has demonstrated in recent times his steely nature with some clutch pots to pull it back and looked to be in to level at 9-9. Kazakis lost position on the penultimate ball to leave it over the pocket and give Morra the easiest route into the Last 16 to meet Konrad Juszczyszyn next.

Tomorrow and Sunday, Table 1 action is available on Sky Sports in the UK and Ireland, DAZN in the USA, Canada, Germany, Austria, Spain, Italy, and Switzerland as well as on Viaplay in Scandinavia and the Baltics and various other broadcasters worldwide including Matchroom.Live in relevant countries. Table 2 will be on the Matchroom Pool YouTube channel. See the full where to watch list here.