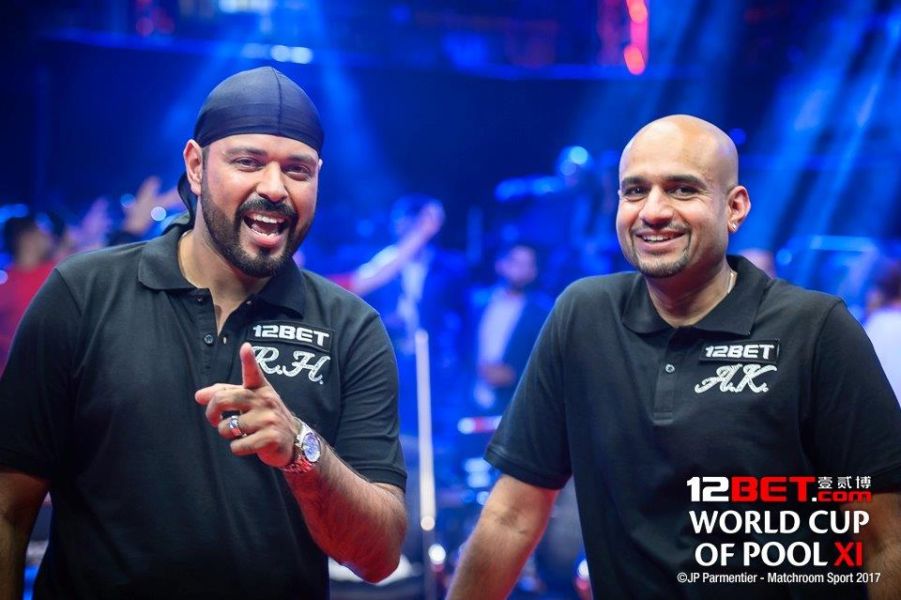 THE FIRST BIG upset of the 12BET World Cup of Pool happened in the final match of the evening session on the opening day as the Indian pair of Amar Kang and Raj Hundal took out England A, one of the pre-tournament favourites.

The England pair of Mark Gray and Darren Appleton were clearly not at their best, in particular Gray, who made a series of gaffes to help India on their way.

Hundal and Kang though, had plenty of team spirit and with the backing of a big and noisy crowd, they held up under the pressure to close the match out.

A delighted Hundal said, “Amar was brought up in California, I was born and raised in London and we represent our motherland. But every time I get out and play I put London on my back. With everything that has happened in London recently, we want to dedicate that to the people of London.

“Our fans are brilliant. We are from a city of love and these guys have love for us and we are lucky to have them.

“Mark and Darren are both great guys who have won big tournaments. There is a mutual respect and on paper they are the favourites but if you ask them in a race to 7, it is a toss of a coin.”

Spain, with World Pool Masters champion David Alcaide at the helm, survived an almighty scare, as they trailed Romania 6-4 and looked scuppered. However, after playing so poorly in the opening stages, they played their best pool as they took the next three racks to edge past a disappointed Romanian pair of Robert Braga and Ioan Ladanyi.

The Scottish pair of Jayson Shaw and Pat Holtz found themselves looking down both barrels managed to slip past the New Zealand duo of Matt Edwards and Toar Dotulong. The Kiwis had stuck with the Scots as they trailed throughout and at 6-4 down looked buried.

However, they made it back to the table and won the next two to find themselves breaking for the match. With positioning tough, it was Edwards who missed a difficult 4 ball up table and from there the Scots ran out for the win.

Commented Shaw, “I didn’t feel comfortable because it was so hot in the arena. I am 100 per cent sure that next match I won’t be feeling like I am today. I have three days now to get myself into the gym and get myself feeling good and when Friday comes I will be a lot fresher than I am today.

“Race to 7 is tough. These are great players you are playing against. It is important to get the win under your belt. Sometimes it is a bit scrappy but a win is a win and we are into the next round,” added Holtz.

Canada through after struggle against fighting Aussies