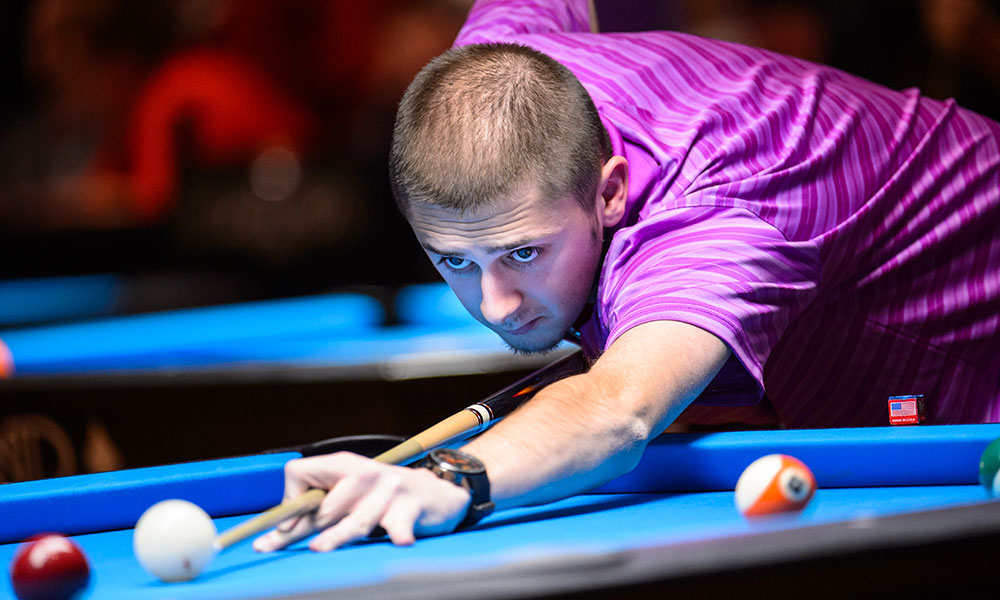 Woodward: “A privilege and an honour and I’ll do my very best”

SKYLER WOODWARD of Paducah, Kentucky will become the youngest player to ever to join the ranks of Team USA when he lines up at the Mosconi Cup next Monday 7th December. The young Kentuckian will be exactly 22 years and seven months when he plays his first shot in the Mosconi Cup as he overtakes team mate Corey Deuel who made his debut aged 23 in December 2000.

Something of an unknown on the world stage, Woodward received one of Mark Wilson’s two wildcard picks along with Justin Bergman as they both finished on the same number of ranking points, just outside the top three automatic places.

Can Woodward make the transition from highly promising youngster into Mosconi Cup winner as he stares down the likes of Appleton, Feijen and van den Berg in front of 1,000 noisy fans?

A lot of faith has been invested in Woodward but captain Mark Wilson obviously feels that his time is now and it’s something the youngster is relishing.

“Words don’t even describe how excited I am to be playing for Team USA at the Mosconi Cup in Las Vegas. It feels amazing to know that I’m the youngest American ever to compete – just amazing, but I have worked hard to make it where I am today.

“I don’t ever really feel nerves or pressure – I know Mark and several others have told me it is a lot different than any other event – but we are a team and the only thing I can do is win or lose and do my best.”

Woodward is proud of his Kentuckian heritage and will be well supported at the Tropicana.

“Kentucky is a great place to live and it’s centrally located for pool. I have lived in KY all my life and I love it. I have lots of great family and friends there as well who are huge fans of my game. I’m not home much to spend much time doing anything but when I am I try to spend time with my family and friends – going to dinner or just visiting.

“I have many family and friends who will be in Vegas at the Mosconi Cup to cheer me on as well as many more back home that will be watching. My mother, my father and his girlfriend, my grandmother, several friends from my home area are coming and of course my grandfather who I lost last year to cancer will be there with me every step of the way cheering me on smiling down on me.

“He was always such a huge supporter of me and my game and I know he’s proud of me. It’s a privilege and an honour to represent the USA and to have my close family and friends to support me and be there with me is awesome. I’m so excited for this journey.”

Woodward started playing pool when he was 10 years-old; “I never thought I would make it to the top but here I am. I have pushed and practiced a lot over the years to get where I am and now I’m living my dream.

“I’ve watched the Mosconi Cup in the past – simply to support the sport and the players and because I have always dreamed of being there one day to play for Team USA. Hopefully, I will play the best pool I can – bring my attitude, my game and skill to help the team bring the Cup back to the US.”

The PartyPoker Mosconi Cup takes place from 7th to 10th December this year at the Tropicana in Las Vegas.

Corey Deuel: ‘Plenty of tricks up my sleeve’