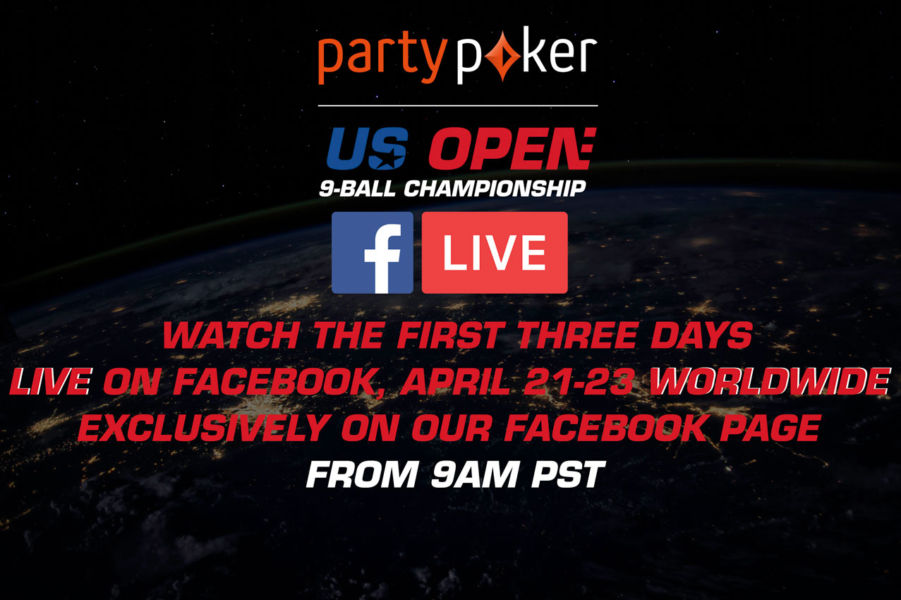 The double elimination stage of the partypoker US Open 9-Ball Championship will be streamed free around the world on Facebook Live at facebook.com/usopen9ball.

Starting on Sunday, April 21, 256 players from 47 different countries will battle it out across 33 tables at the Mandalay Bay Resort and Casino Convention Centre, Las Vegas. Their first goal will be to reach the last-16 stage, when the tournament switches to a single elimination format with all matches taking place in the Diamond Arena – Matchroom’s renowned TV stage.

From April 21-23 the streaming feature table will showcase some of the standout matches aired globally, free of charge, on the partypoker US Open 9-Ball Championship’s official Facebook page.

The action will commence at 9am local time each day and Sunday’s play will open with reigning US Open champion Jayson Shaw beginning his defence against Germany’s Marcus Westen, live on Facebook.

Three further first round matches will follow on the streaming table. They see Justin Bergman in action against Paul Jaurez, partypoker Mosconi Cup MVP Skyler Woodward versus Luu Minh Phuc and five-time US Open champion Shane van Boening taking on Abdullah Saeed O Alshammari of Saudi Arabia. The first day will conclude with some of the standout matches from the first round on the winners’ side.

Matchroom Sport Chairman Barry Hearn said: “We are thrilled to be bringing the first stage of the US Open 9-Ball Championship to pool fans around the world, free of charge, on Facebook.

“As everybody knows this is the first US Open promoted by Matchroom Multi Sport and we want to take this event to a whole new level. That means reaching more fans than ever before. We’ll be broadcasting the final three days live on our partner networks in over 100 countries around the world and we are delighted that we can showcase the pick of the matches from the double elimination stage, free on Facebook.

“With a full field of players from almost 50 different countries this event already has global appeal and we are going to make that even bigger. For the players, it is going to be a tough battle to reach that last-16 stage and with so many of the world’s best descending on Vegas we know there will be some huge matches along the way.”

All matches at the partypoker US Open 9-Ball Championship are race to 11, winner breaks, except the final which is race to 13. The draw and match schedule for the first stage of the tournament is available now at www.matchroompool.com.

The tournament will be split into two stages with the full field playing double elimination down to the final 16 from Sunday, April 21 until Tuesday April 23 across multiple tables. From Wednesday April 24 until Friday April 26 the final 16 players will play straight knockout in the TV Arena in front of a global television audience.

DAZN To Broadcast partypoker US Open Across America