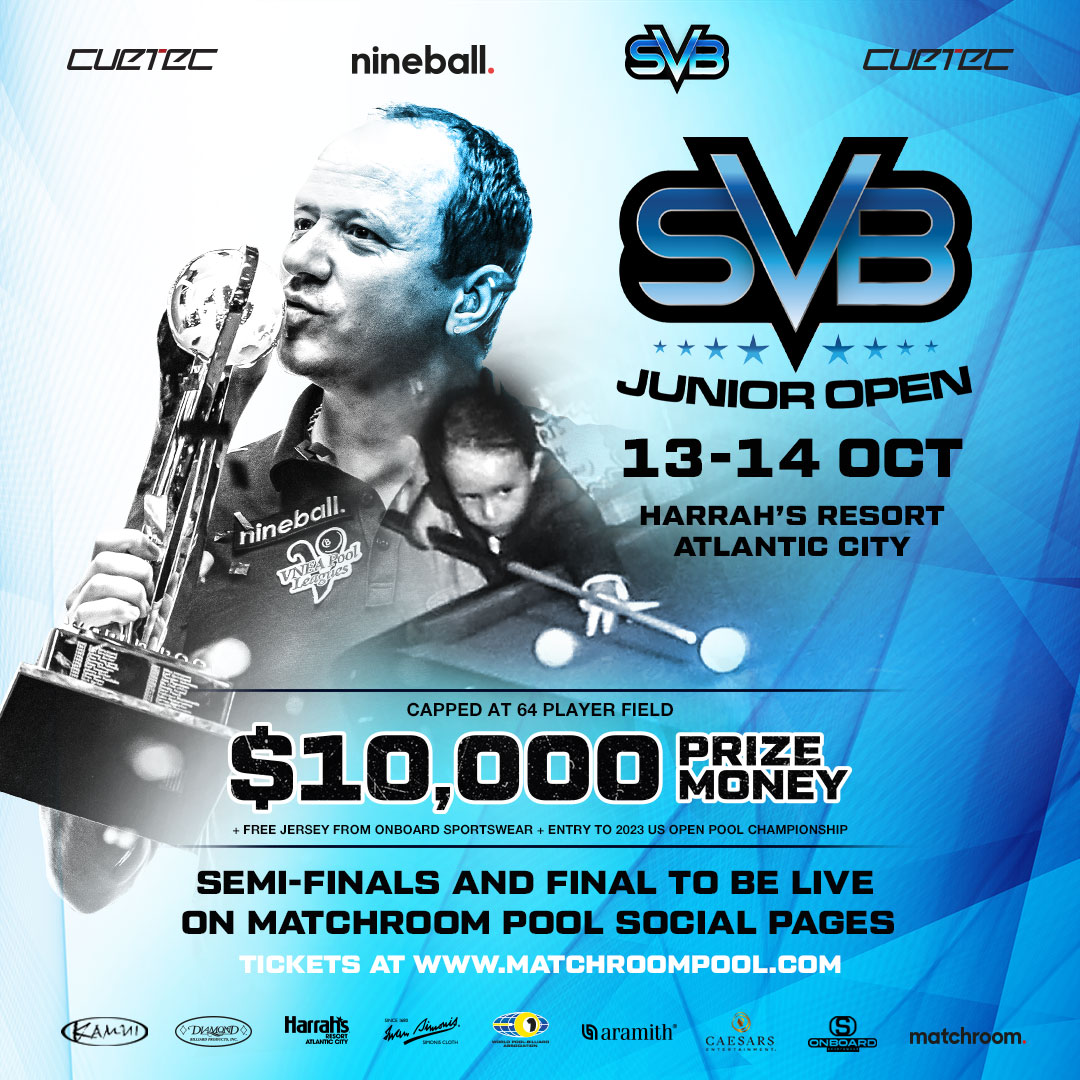 Matchroom Pool and World Champion Shane Van Boening are delighted to announce the field for the inaugural SVB Junior Open set to take place at Harrah’s Resort, Atlantic City during the US Open Pool Championship from October 13-14 has doubled from 32 players aged 17 and under to 64 with the semi finals and final set to be streamed live on the Matchroom Pool YouTube channel to over 180,000 subscribers.

Alongside this, all Junior competitors will receive a SVB Junior Open jersey free of charge from official apparel partner Onboard alongside the $10,000 prize fund and the winner getting a spot in the 2023 US Open Pool Championship.

The SVB Junior Open sold out within minutes as pool players aged 17 and under swamped to take their spot. Due to a surge of demand in the event, the field will double and in the interest of fairness, 32 players on the waiting list were contacted with the opportunity to join the field before working further down the list to double the field from 32 to 64.

64 players will now do battle in a single elimination format that will see the winner take home $2,500 with the tournament played on Diamond Tables, with Simonis Shark Grey 860 cloth, Aramith Tournament Black balls, and KAMUI chalk in the same Diamond Arena as the US Open Pool Championship which takes place from October 10-15.

The prize fund of $10,000 sees Van Boening’s official cue partner, Cuetec put up $5,000 alongside $5,000 from Matchroom to offer one of the most exciting prize pots in Junior Pool as well as automatic and free entry to the 2023 US Open Pool Championship set to take place at Harrah’s Resort, Atlantic City September 25-30, 2023.

Emily Frazer, Matchroom Multi Sport Managing Director said: “The demand for the SVB Junior Open has been unprecedented and it just indicates the huge appetite in the USA and beyond to follow in the footsteps of the world champ Shane (Van Boening). Shane has been pestering me since the minute we sold out the tournament to increase the field, and I am delighted we have been able to do this and better yet ensure both the Semi Finals and Final will streamed live following KAMUI’S endorsement into the event. Just picture the Final of the SVB Junior Open will be played next to the US Open Quarter Finals, what an experience for these kids. We wouldn’t be able to do this without thanks to our partners Cuetec, Diamond Billiards, Aramith Balls, Iwan Simonis, KAMUI, Onboard Sportswear and Caesars Entertainment.”

Van Boening is elated to see the field increase: “I knew the SVB Junior Open would be popular but never expected it to go so quickly. I am so happy to see it increase to 64 players and hopefully we can see that grow even further in future years. I’ve said it before and I will say it again, this is an opportunity like few before and I can’t wait to be table side to cheer on and inspire the next generation.”

Zach Dimotta, the president of Imperial International, official US distributor for Cuetec, said: “We are elated that Matchroom was able to accommodate a larger field for the SVB Junior Open. We all know how important to SVB expanding the field was and how hard he pushed for it. Giving these young players an opportunity to showcase their talents on the Matchroom stage in this events’ inaugural year is an experience that they will remember forever. I can’t wait to walk into Harrah’s and be part of this event!”

Masato Hiraoka, President of KAMUI said: “It is a great honor to support the SVB Junior Open. KAMUI shares the same vision as Shane – giving opportunities to young ones is what we should do, and we believe this event is the first step to bring more. We are more than happy to take this journey with them to bring greater vision for young players.”