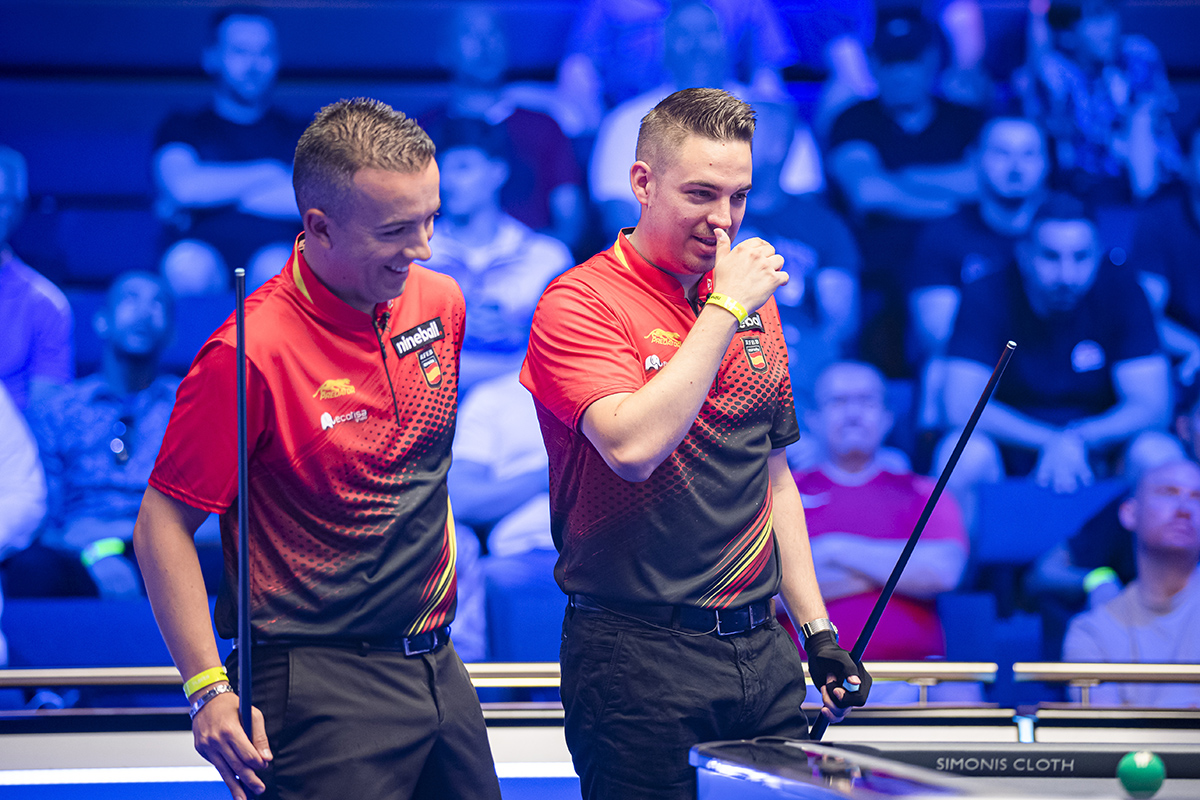 SPAIN AND USA REACH QUARTER-FINALS OF WORLD CUP OF POOL

Spain and the USA have become the first sides to reach the quarterfinals of the 2022 World Cup of Pool at the Brentwood Centre, Essex live on Sky Sports Arena in the UK, DAZN in the USA, Canada, Spain, Italy, Germany, Switzerland, Austria, and Viaplay in Scandinavia, the Baltics, Netherlands, and Poland. Matchroom.Live in territories without a broadcaster.

One of the best matches of the first round came last as Japan’s Naoyuki Oi and Masato Yoshioka battled away with the unseeded but lethal duo from Switzerland of Dimitri Jungo and Ronald Regli. Japan had gotten off to the ideal start after winning the lag to take the opening two racks but that was only the start of an epic contest. Yoshioka dry broke in the third and from there, Switzerland pieced together a five pack, crafted like a fine Swiss watch.

Japan was staring down the barrel going into the eighth rack, but they were handed a lifeline when Regli scratched on the break. A neat bit of play later and Oi/Yoshioka’s hopes were renewed with the deficit cut to two. The break in the ninth wasn’t great from Oi and it led to Switzerland playing the pushout with Jungo at the table. The pushout was played well but Japan turned the needle with a safety of their own which put Regli in a tough postion. Kicking out on the one, Regli opened the table up to allow Japan in and cut the Swiss advantage to one.

Regli provided another opportunity for Japan in the next rack as he jumped on the one but made it leave the table in the process. It was another rack for Japan, and they were back in it. Oi and Yoshioka were back in the mood after initially being frozen out for five racks and they did their best to see things through as they reached the hill first at 6-5 after a 2-9 combo from Oi had brought them level.

Oi was unlike his regular self at times, and the costliest moment of the match came when he missed the one ball when trying to screw the cue ball back. With the one firmly hooked by Switzerland, Japan was back at the table but again it was the case of too much power and a lack of table speed judgment that led to Switzerland forcing a hill-hill decider.

The break proved key in the end of this contest, Japan’s meager 0.7 balls off the break in comparison to Switzerland’s 1.6 proving testimony to a superb victory for Jungo and Regli who meet Hungary next.

The Last 16 began with a European heavyweight clash between Spain and Albania for a spot in the quarterfinals and it was the latter who won the lag with a team of Eklent Kaçi and Besar Spahiu.

Spain’s David Alcaide and Francisco Sanchez Ruiz didn’t have to wait too long for their first opportunity after Kaçi’s error when kicking the three ball opened the door. Rack two was again down to Spain’s expert safety, so often seen in three cushion, a game both know well. Kaçi was hooked on the one and he proceeded to scratch giving Spain ball in hand inevitably a second rack. At the commercial break, it was 3-0 Spain, no small part down to a golden break from Sanchez Ruiz, the first of the week.

It wasn’t the case in the match of Albania playing badly, Spain were just too good as they racked up an unassailable lead. In the fifth, at 4-0 down, Spahiu tried a six cross bank only for it to not come off and give the Spaniards another easy win to go 5-0 ahead.

Sanchez Ruiz’s cue power on the break was working well but a dry break in the next rack gave Albania their chance to get on the board at 5-1. It was evident it wasn’t going to be Albania’s evening though and after conceding position in rack seven, Spain was on the hill. The job for Alcaide and Sanchez Ruiz was soon wrapped up inside 45 minutes to become the first nation into the quarterfinals.

“We played really good. We’re happy with our performance. Let’s see what comes next for us. Both players are good but when we play like that, we are so strong. We’re happy with our showing. I have a feeling in the next round, we are not thinking anything further. We played good though and broke much better than in the last round.” – Alcaide and Sanchez Ruiz after beating Albania.

The final action of the evening came in the form of a mighty clash between the USA and Poland. Both sides fancied for the title come Sunday evening in Brentwood. The USA’s Shane Van Boening broke in the first rack but didn’t leave many positions for compatriot Skyler Woodward giving Poland their first opportunity in the match. The pair of Mieszko Fortunski and Wojciech Szewczyk did the rest and they led early on 1-0.

Fortunski had a run to the World Pool Masters semi-finals just last month and alongside Szewczyk they were proving to be good value at 2-0 up. A ‘safety’ on the two in rack three could’ve been enough for them to make it 3-0 but with World Champion Van Boening at the table, the South Dakota Kid had other ideas and the USA made it 2-1. A straightforwards fourth rack brought the USA level.

From then on, the United States took control of the contest and loved every moment of it to switch it up with five racks on spin to be two away from the quarters. Woodward coming close to messing that one up when the nine rattled both sides of the pocket in the seventh.

Into the eighth, Woodward played a big safety shot to keep Poland tied up. Fortunski went airborne but he left the three in a good position. Woodward missed the resulting cut which left to a brief safety exchange where the USA came out on top, no thanks down to a fluke from Van Boening on the four and eight. The USA were on the hill.

Woodward brought his A1 game and that came in clutch as he laid the safety that would prove to be Poland’s final moment of the game as they fouled to give Van Boening and Woodward the table to complete victory. They face Hungary or Switzerland next.

Action returns from 11am tomorrow with Round 2 continuing live on Sky Sports Arena at 11 am as well as live on DAZN in the USA, Canada, Spain, Italy, Germany, Switzerland, Austria, and Viaplay in Scandinavia, the Baltics, Netherlands, and Poland. See the full list of broadcasters here including Matchroom.Live if no broadcaster is available.