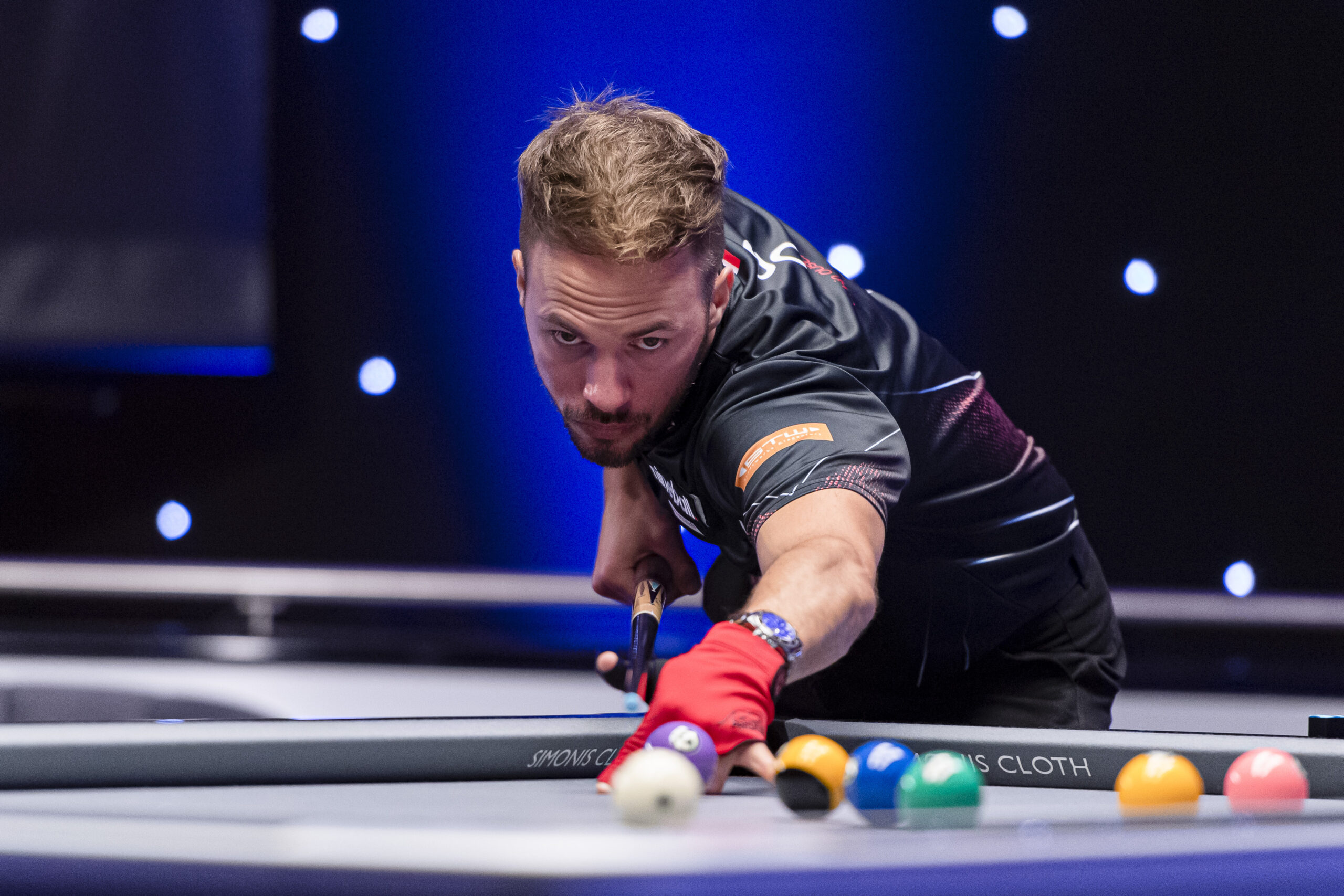 Albin Ouschan won three matches from three on the opening day of the inaugural Predator Cues Premier League Pool at Stadium MK, Milton Keynes broadcast live on DAZN in the USA and territories worldwide alongside other networks.

Ouschan returned to Milton Keynes with fond memories of the English venue having sealed his second world title on his last visit in June 2021. The Austrian started out against compatriot Max Lechner where he sealed a quick 5-3 win to get off to the best possible start before further wins over Mieszko Fortunski and Oliver Szolnoki. Ouschan’s crowning moment of the day came in the opener though as he channeled his inner Efren Reyes to nail a Z shot on the three. Head to the Matchroom Pool Twitter to see it in full.

Fans were treated to a wealth of top-quality matches all day long and David Alcaide set the tone against his compatriot Sanchez Ruiz in the second match of the day with a 5-0 whitewash. Alcaide sits at number three in the 2022 Nineball World Rankings and sits well positioned with two wins from three on day one.

Shane Van Boening started out his Predator Cues Premier League Pool journey against Team USA Mosconi Cup teammate Skyler Woodward and it was the 2021 vice-captain who reigned supreme 5-3. Van Boening taking an opening point with a golden break in the final rack. Van Boening is looking for his first Matchroom individual title since the 2015 World Pool Masters and got revenge over Alexander Kazakis for defeat in the 2021 World Pool Masters final to have two points from two matches.

Two-time Mosconi Cup MVP Jayson Shaw and Joshua Filler are the only two players still unbeaten alongside Van Boening and Ouschan. Shaw got the better of Kelly Fisher 5-1 in the duos opener before dismantling World Pool Championship semi-finalist Szolnoki 5-2. Filler meanwhile had to come through hill-hill finishes against both Omar Al-Shaheen and Eklent Kaçi to bag two of his three points before overcoming Japan’s Naoyuki Oi.

Oi came into Predator Cues Premier League Pool off the back of reaching the semi-finals of the US Open in September. The Japanese cueist downed both Alcaide and Sanchez Ruiz of Spain and Fortunski of Poland who remains without a win.

Fisher got her first win on the board in unlikely circumstances against the recent Derby City Classic 9-Ball Division winner Sanchez Ruiz in a hill hill finish. It looked like it would be Sanchez Ruiz who would claim his first point of the day, but he fouled when trying to kick the three ball. Fisher duly completed a huge win from 4-2 down to take confidence into day two.

Predator Premier League Pool sees 16 players compete in a league format with an increased prize fund of $100,000 guaranteeing each player $2,500 and the winner taking home $20,000. Day two gets underway from 10 am UK time with Oi against Shaw on Table 1 and Ouschan against Kazakis on Table 2.