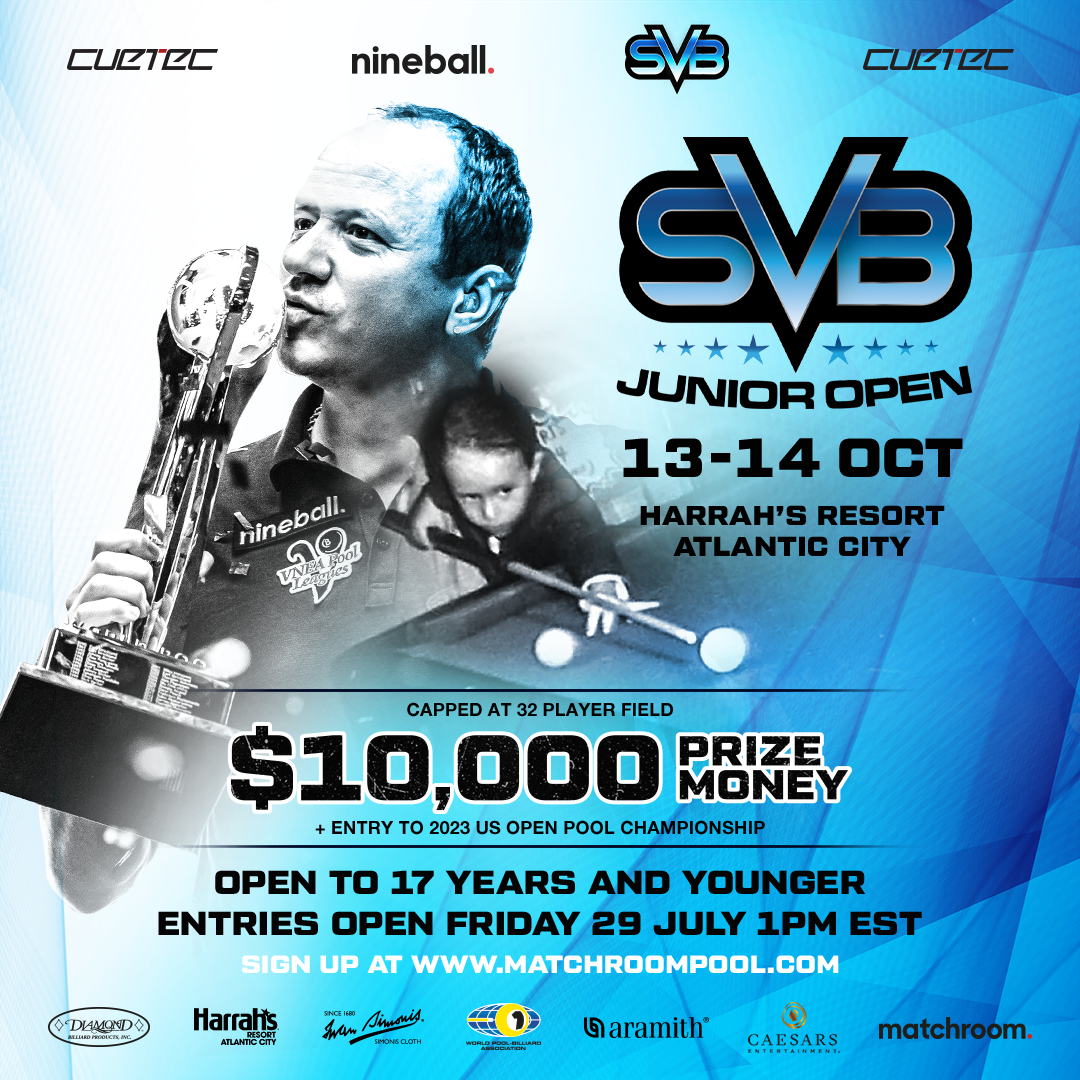 Matchroom Pool and World Champion Shane Van Boening are delighted to announce the inaugural SVB Junior Open, a new open Junior event co-promoted by Van Boening and Matchroom with a prize fund of $10,000 set to take place at Harrah’s Resort, Atlantic City during the US Open Pool Championship from October 13-14.

The SVB Junior Open will be available to budding pool players aged 17 and under with the field limited to only 32 participants and zero entry fee. Entries open Friday, 29 July. The tournament will be played on Diamond 9ft Tables, with Simonis Shark Grey 860 cloth and Aramith Tournament Black balls and will be held in the same Diamond Arena as the US Open Pool Championship which takes place from October 10-15.

The prize fund of $10,000 sees Van Boening’s official cue partner, Cuetec put up $5,000 alongside $5,000 from Matchroom to offer one of the most exciting prize pots in Junior Pool as well as automatic and free entry to the 2023 US Open Pool Championship set to take place at Harrah’s Resort, Atlantic City September 25-30, 2023.

Emily Frazer, Matchroom Multi Sport Managing Director said: “We’re elated to launch the first-ever SVB Junior Open in partnership with Shane. Shane Van-Boening is an incredible role model for up-and-coming players, his attitude, his practice regime, his relentlessness, and his pure drive is unlike any other and I feel honoured to both watch and be a part of building the SVB name and legacy.”

“We have been focused on producing a platform for Junior players for quite some time but unsure of the direction: with the combined motivation of Shane, the Matchroom team, Cuetec, and Diamond Billiards this will provide a fantastic platform and opportunity for young players to follow in their footsteps of the sports World Number 1.”

“I’d like to take the opportunity to thank Cuetec, Diamond Billiards, Aramith, Iwan Simonis, and Caesars Entertainment for making this cheeky addition possible and we’re excited to see how is evolves and where it will head.”

Van Boening is excited to see the tournament have lift off: “It’s an honour to be in the position to launch my own tournament especially alongside Matchroom and the US Open, an event that’s so close to my heart having won it five times.”

“We need to give juniors the best opportunities possible to feel inspired and feel they can go on the journey that I have been on. I’m excited to see how the SVB Junior Open progresses and where we can take it and most importantly be their motivator whilst they’re in action.

“I know Matchroom will provide a great platform for this event, it will be at one of the sport’s biggest tournaments with the biggest names in the game.”

Zach Dimotta, the president of Imperial International, official US distributor for Cuetec, said: “When Shane and Matchroom presented Cuetec with their idea for the SVB Junior Open, we were beyond excited. It really felt like the perfect fit for us.”

“On one side we had family, we had the reigning World Champion, and more importantly one of the game’s best role models in Shane Van Boening. And on the other side, we had the game’s best event producer and promoter in Matchroom… And these two juggernauts wanted to work with Cuetec to create the next generation of champions and fans. Sold. If only making the world’s most advance composite cues was this easy. “

Chad Scharlow, VP of DIAMOND BILLIARD PRODUCTS INC. said: “All of the excitement that Matchroom has generated with Nineball, is now transmitting to the Juniors!  The juniors will get to compete in the most dynamic tournament arena they have ever witnessed.  I am extremely proud to work with Matchroom on the SVB Junior Open.”

Registration for the event will open on Friday, 29 July. 1pm ET.

European Open | Where to Watch