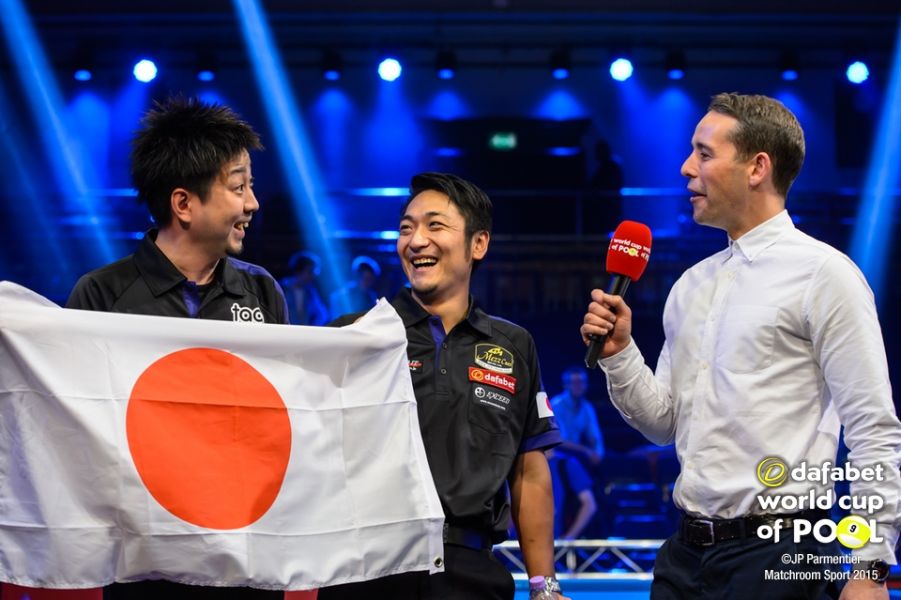 Japan and Taiwan through!

THERE WERE quarter-final wins for Chinese Taipei and Japan as the Dafabet World Cup of Pool continued in London on Saturday afternoon. The Taiwanese overcame a very unlucky Austrian side to book their fifth World Cup semi-final of which they’ve yet to win one. In the other match, Japan raced into a huge lead against Qatar before labouring to end it. They eventually fell over the line 9-4.

In a high-quality match up, Chinese Taipei roared past the Austrian pair of Mario He and Albin Ouschan to become the first team to reach the semi-finals of the Dafabet World Cup of Pool. 9-5 was the score line as the Taiwanese started out strongly and maintained their dominance throughout.

The Austrians though enjoyed some atrocious luck as they scratched six times in total, with Mario He losing the white to the pocket three times from his break shot. However, the duo of Ko Pin Yi and Chang Yu Lung showed vision and creativity as they took on some amazing shots and were always on the offensive, looking for chances.

The Austrians had seven fouls, some of their own doing and some down to bad luck and that was a punishing statistic against the talented Taiwanese pair. One of the standouts of the match was a 2/9 combination by Ko to go 6-3 ahead as he kicked all the way up table to connect with the 2/9.

Ko was delighted with the win as he zeroed in on his third major title of the year following wins at the World 10 Ball and World 9 Ball Championships; “We are very happy to be in semi-finals again. I was a bit lucky in the World 9-ball final last week, I didn’t play great against Shane, but I played well in that tournament and have brought a lot of confidence to London.”

“As a team we are playing well together and we have some luck; we tried some shots which worked out for us. We expect to play England A in the semi-finals. They are good players who play very well together. They are defending champions and are in their home country so it will be a very difficult match,” he added.

In the second match, Japan looked like they were going to obliterate the Qatari pair of Waleed Majid and Bashar Hussain as they shot into a 7-0 lead in quick time. Qatar made plenty of errors as the free-wheeling Japanese who played without a care.

Qatar took a rack back but when Japan got to the hill at 8-1 the end seemed nigh. The match though degenerated as both teams level of play plummeted. Qatar won three long racks on the spin before Japan put the crowd out of their misery to reach the semi-finals for the second time.

It was a shame for Qatar who had set the tournament on fire with wins over the USA and Czech Republic. “We are very disappointed with our performance,” said Bashar.

“We didn’t start well and didn’t get any momentum. They had some luck where they would miss a ball and get a snooker and then they took up a big lead. That makes you become a bit nervous because the score is so big.

“We are very pleased to get to the quarter-finals and next time we want to build on that and do better. We are proud to reach this stage but we were very disappointed with that performance.”

Toru Kuribayashi
“We are very happy with the win. We are a good team. We gave ourselves a good lead in the match and that puts pressure on Qatar. We struggled at the end to get the final rack and that gave them a chance but we are very pleased to be through.”

The Japanese were delighted with the win; “We are very happy. We didn’t play well at the end because we felt the pressure to finish the match. We had a little bit of luck but we had a strong lead. Japan can win the World Cup, “said Oi.

Kurabayashi added, “Tonight we will watch Finland and England B tonight because we play the winner. They are both good teams and this is the semi-finals, so we will expect a very tough match. But Japan will win.”