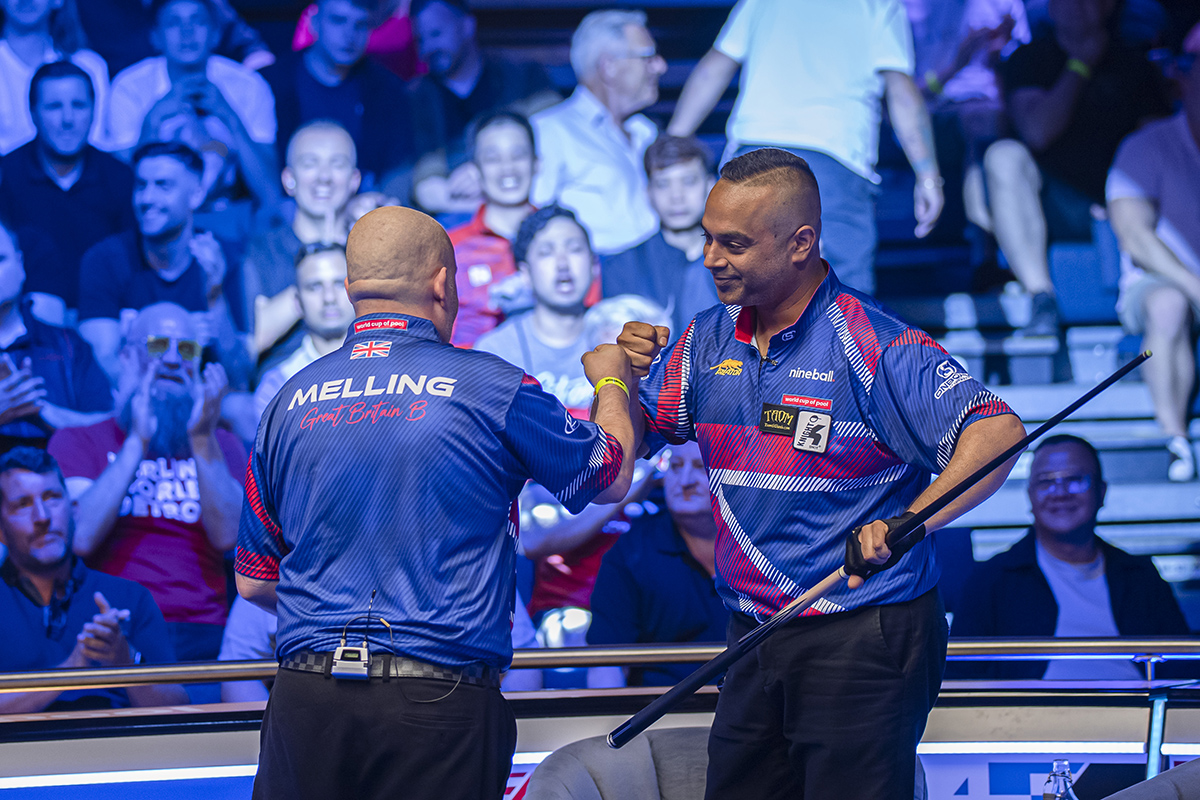 Great Britain B’s Imran Majid and Chris Melling whitewashed their counterparts Great Britain A 7-0 to reach the Last 16 of the 2022 World Cup of Pool at the Brentwood Centre, Essex live on Sky Sports Arena in the UK, DAZN in the USA, Canada, Spain, Italy, Germany, Switzerland, Austria, and Viaplay in Scandinavia, the Baltics, Netherlands, and Poland. Matchroom.Live in territories without a broadcaster.

Great Britain A (Jayson Shaw and Elliott Sanderson) won the lag, but Shaw’s break proved to be an early downfall scratching to get Great Britain B to the table early on to run out to lead 1-0 before a break and run in the second rack. Imran Majid was returning to the GB fold for the first time since 2019 whilst Chris Melling was looking to put pay to his old teammate away. Majid and Melling’s breaks were exemplary as they rallied up ahead of steam with relative ease whilst Shaw and Sanderson were rooted to their chairs as B went 3-0 up, 4-0 up, and 5-0 up. A dry break from Melling in five gave A their first chance since early on.

A brief safety exchange on the two ball could’ve helped GB A but Majid and Melling were not relenting as they kept their counterparts knotted up. Majid’s safety play and Melling’s magic came to play throughout and eventually they freed the table up to lead 6-0. It was truly exhibition stuff with the pair loving every moment in front of a raucous crowd.

The closing rack was a clinic and summed up GB B’s performance. A huge jump shot on the one ball from Majid set the tone before a tricky safety left Sanderson having to kick on the six ball only to leave it hanging over the pocket and leave Great Britain B their moment to seal a memorable win to meet either South Africa or Thailand next.

Melling: “I thought we played really well. The break was our friend. We controlled the cue ball well and got shots on the one and two. Nineball can be cruel sometimes. Unfortunately for the A team in Jayson and Elliott, they didn’t really get a chance and when they did, they didn’t really get a shot. It’s tough for them, I have been there myself. To become great, you must take the defeats and learn from them. He will learn (on Sanderson), he is only going to get better and better. I am going to play all the events. I haven’t been at my best for some time, but I know when it clicks, I can beat anybody on the planet. I haven’t done well in the last few events. That’s not where I am at in my mind, I know I am better than that. You have to let defeats spur you on.”

Majid: “It was a pretty good performance I have to say. I didn’t expect to play like that. Chris kept potting balls, I potted balls. We broke well and that was the key. I thought if we got 40/50 people behind us, it would spur us on and that’s exactly what they did. I was interacting with them. It was great. I said in my pre-match interview we’re the fattest team, we eat players alive and that’s what we did, we had a full English Breakfast there.”

Serbia’s Aleksa Pecelj and Andreja Klasović made a quick start to lead 3-0 over Estonia’s Denis Grabe and Rainer Laar. Estonia’s first chance came in the fourth after a foul from Pecelj Pecelj gave Estonia their first chance to pull a rack back at 3-1. Two outrageous flukes from Grabe and Laar respectively pulled Estonia back into it at 3-2. Grabe kicking the one somehow caused the six to roll onto the three and in before being hooked on the one still. Laar then kicked the one into the two which ended up putting the eight-ball in. Before Serbia knew it, their lead was cut to one.

Soon the contest went four all, Serbia’s Pecelj looked to be in with two balls left but a costly miss on the eight ball made it four apiece. Laar sank the 9-ball in the previous rack to level, but he scratched on the break in the middle pocket to hand the ball back to Serbia in the ninth. Klasovic failed to make that pay though on the four ball letting Grabe to the table who duly obliged with the help of Laar for the Estonians to lead after a brief safety battle.

At 5-4, anything could’ve happened, and it did as Grabe missed the seven when trying to screw back to leave Laar plumb on the eight. Klasovic and Pecelj sank the remaining balls on the table to make it 5-5. The seven proved key in the next rack as Serbia struggled to contain the cue ball, Klasovic missed a bank and Estonia were on the hill first. Pecelj, a recent quarter-finalist at the UK Open, along with Klasovic had their moments in the tie and they made sure it went all the way as they levelled in the penultimate rack for hill-hill. A elongated battle on the one and two led to ball in hand for Estonia but they couldn’t make it pay with the one and two locked up. Serbia got out of jail to force it.

In the first hill-hill contest of the week, Pecelj scratched on the break and from there on Grabe and Laar closed out a memorable win to reach the Last 16. Estonia meet Finland next up.

Austria headed into the World Cup with a new pairing as Max Lechner made his debut alongside the formidable two-time winner Albin Ouschan. Finland meanwhile had the ever-impressive Mika Immonen lined up with young Jani Uski for the first time. Finland got off to a better start to lead 2-1 at the first break. It was a shutout from then on for Immonen and Uski who potted ball after ball after ball to take a commanding lead. The fourth rack was Austria’s downfall as Lechner missed the five ball to get Finland back at the table for 3-1.

The fifth rack became the big talking point after Ouschan fouled by shaving the nine on his way to trying to reach the three. It was a hairline of a touch that referee Marcel Eckardt had spotted giving Finland ball in hand who made the most of it to lead 4-1. In the sixth, Immonen tried to cut the one only for it to end up safe and leave Austria hooked. It was a stroke of fortune, but one gratefully received by Immonen and Uski who were soon 5-1 up.

A momentous night was soon wrapped up with Finland producing the second shock of the night sealing a memorable 7-1 win and a spot in the Last 16.

Action returns from 11am tomorrow morning with Thailand’s snooker duo of Thepchaiya Un-Nooh and Noppon Saengkham meeting South Africa live on Sky Sports Arena at 11 am as well as live on DAZN in the USA, Canada, Spain, Italy, Germany, Switzerland, Austria, and Viaplay in Scandinavia, the Baltics, Netherlands, and Poland. See the full list of broadcasters here including Matchroom.Live if no broadcaster is available.