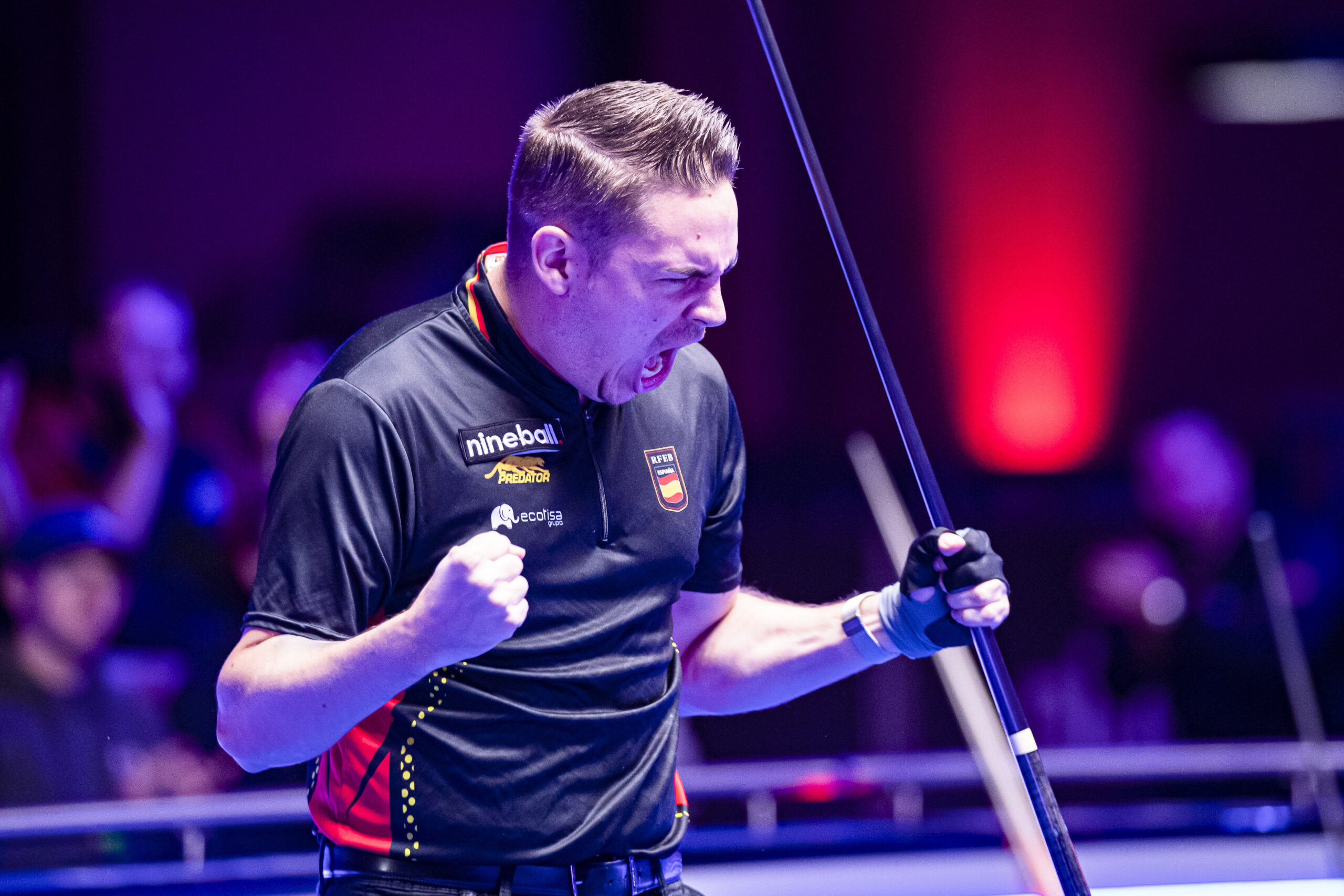 Rack 5 – Biado 1-4 Sanchez Ruiz – It’s the Spaniard who takes control of proceedings with a routine break and run.

Rack 7 – Biado 2-5 Sanchez Ruiz – Sanchez Ruiz breaks dry for the first time in the match leaving the table fairly open for Biado to capitalise and cut the deficit to three racks.

Rack 8 – Biado 2-6 Sanchez Ruiz – Hooked on the break, Biado plays the push out and Sanchez Ruiz takes it on to make the one safe. Biado makes clear contact with the one only to leave it in the prying position for Sanchez Ruiz to bank it in and set up a four rack lead again.

Rack 9 – Biado 2-7 Sanchez Ruiz – Sanchez Ruiz finds himself hooked on the break this time with the two in no line of sight. The push out is played to tempt Biado but he keeps it safe before Sanchez Ruiz leaves it open for Biado to come in. He stumbles on the four though as he leaves it in the jaws much to his opponents relief who runs up a 7-2 lead.

Rack 10 – Biado 3-7 Sanchez Ruiz – A lengthy safety battle on the one opens the rack before Biado gets to the table to clear up including a superb positional shot to keep the cue ball on a string to get from the five at the bottom of the table to top. Biado had momentum.

Rack 11 – Biado 4-7 Sanchez Ruiz – For the first time, Biado has momentum but it’s halted by the two ball again. This time, he kicks brilliantly at the two after Sanchez Ruiz seemed to have it safe and from there, three racks separated.

Rack 12 – Biado 5-7 Sanchez Ruiz – Momentum pushes Biado ever closer with a break and run and his third rack on the spin. Memories of his comeback against Aloysius Yapp in last year’s start to come back where Biado trailed 7-3 in the final.

Rack 13 – Biado 6-7 Sanchez Ruiz –  A cooly delivered Biado rack to put the biggest pack of the match together and pull Sanchez Ruiz to within one.

Rack 14 – Biado 6-8 Sanchez Ruiz – Sanchez Ruiz was frozen in his chair for some time before returning to the table after Biado broke dry. A brief safety battle ensues before an outrageous bank on the one ball when airborne for Sanchez Ruiz puts the table open for his first rack since the ninth.

Rack 15 – Biado 6-9 Sanchez Ruiz –  The seven nearly kicks the cue ball in off the break but Sanchez Ruiz survives before playing safe with no angle on the two. Biado plays another shot of the tournament contender with a reverse cut on the two ball in when the shot didn’t look on taking the cue ball around the table before finding position on the three and look to be ready to cut the lead again but he loses the cue ball position when looking to make the eight which is frozen to the rail. Sanchez Ruiz takes full advantage to be two away.

Rack 17 – Biado 7-10 Sanchez Ruiz – A superb 2-9 carom from Biado puts him back in the contest after Sanchez Ruiz fails to get the cue ball safe.

Rack 18 – Biado 8-10 Sanchez Ruiz – The consistency of Sanchez Ruiz’s breaking has helped him reach the final but in the later stages of this match, the cue ball was letting him down. He was forced to kick at the one sending balls flying arounf the table. That move saw Biado get back to the table to keep the tie alive.

Rack 20 – Biado 10-10 Sanchez Ruiz – The crowd raised the roof as Biado forced a hill-hill decider in the match of the tournament so far thanks to an expert break and run.

Rack 21 – Biado 10-11 Sanchez Ruiz makes three balls on the break but the four was going to prove troublesome with it tied up on the eight. His first challenge was the two ball though which was tucked in with the five. The Tiger tries to play it safe but leaves it open for Sanchez Ruiz to make it and edge towards the line. Sanchez Ruiz carries plenty of snooker experience amongst his armour of cueing and it showed with an expert safety to send the cue ball up the table and tuck the four at the opposite end. Biado kicked at it with much pace but ended up leaving the cue ball plumb for Sanchez Ruiz to come to the table and knock the defending champion out.

The final will be live on Sky Sports in the UK, DAZN in the USA, Canada, Brazil, Spain, and Italy as well as Viaplay in Scandinavia, the Baltics, and Poland, and other broadcasters worldwide which can be found here including on Matchroom.Live in countries without a broadcaster.