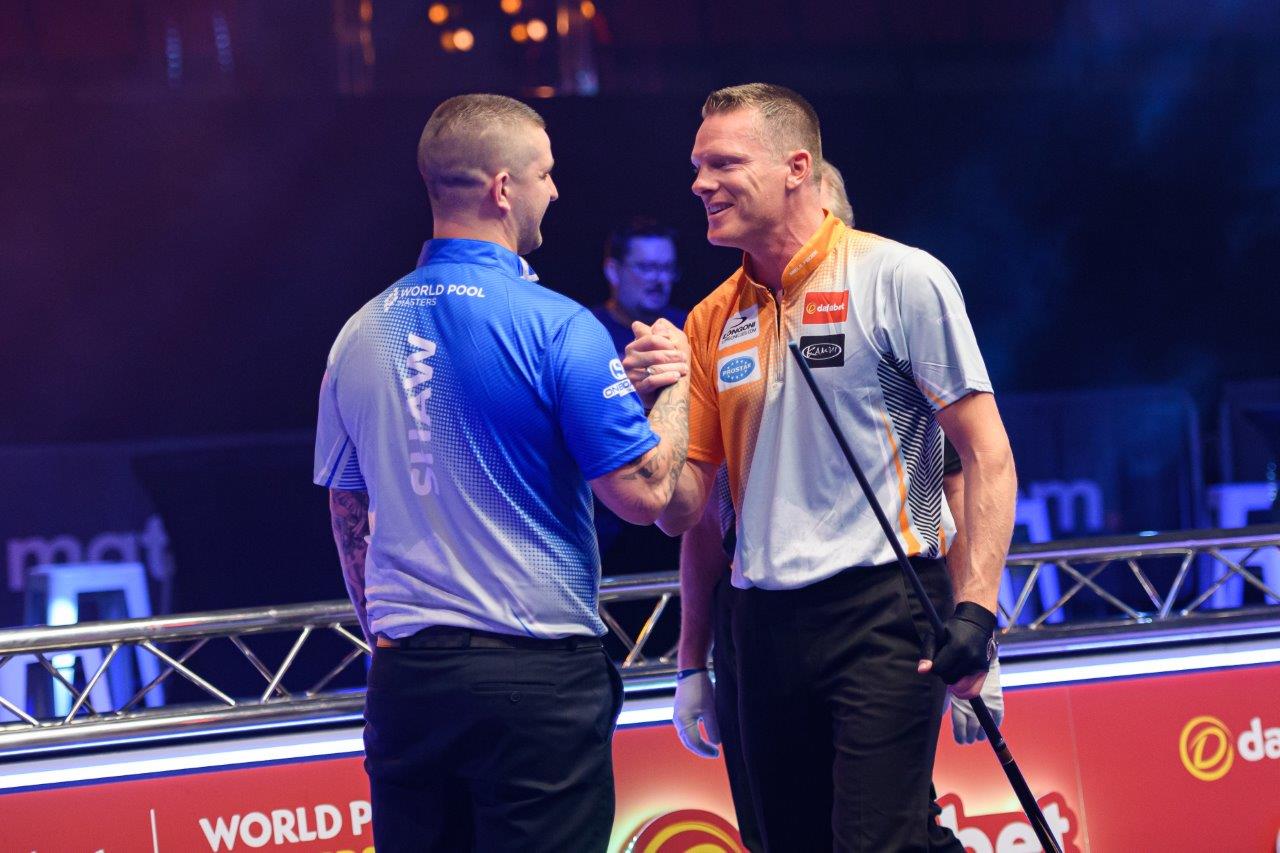 Niels Feijen’s quest for a third World Pool Masters title remains on course after a dramatic hill-hill win over Jayson Shaw, while Max Lechner and Denis Grabe are also through to the quarter-finals of the Dafabet World Pool Masters at Europa Sports Complex, Gibraltar.

Feijen missed the 5 at hill-hill against Shaw, before the Mosconi Cup MVP did the same to allow the Dutchman to complete a victory which will see him face Eklent Kaci in the quarter-finals later this evening. Grabe had earlier defeated Albin Ouschan 7-3 to set-up a last-eight clash with Joshua Filler.

The afternoon session had opened with Lechner up against Mieszko Fortunski. After the first four racks were shared, Fortunski extended to a 4-2 lead. Lechner took the 7th and looked sure to level until the 8 refused to go into the tight corner pockets. Instead, Fortunski was leading 5-3.

He wasn’t able to reach the hill in the next, as Lechner took his chance to pull back to 5-4. The Austrian fightback continued as Lechner levelled and then was first to the hill at 6-5. At this point, Fortunski could only watch on as Lechner broke and ran the next rack to book his place in the quarter-finals, where either Fedor Gorst or Shane van Boening will await.

“it was a great match,” said Lechner. “I had a very shaky start at the beginning; the adrenaline kicked in the moment I walked out. I have missed that feeling and I am happy with how the match went.”

After struggling at times against Roberto Gomez in the preliminary round, a composed Denis Grabe gave himself a 4-1 lead over Albin Ouschan before the Predator Championship League winner got back to the table to make it 4-2. However, Grabe then won his fifth and sixth racks to reach the hill. However, a rare event then occurred as the Estonian lost rack nine on the three-foul rule. A fluked snooker from Ouschan was followed by two very good ones, and Grabe couldn’t escape from any of them.

He wouldn’t regret it however, as he took the next one for a 7-3 win over one of the pre-tournament favourites.

Niels Feijen didn’t have a shot until the fourth rack of the final match of the afternoon session. He was locked in his seat as Shaw ran three racks having won the lag, before the Dutchman took the fourth. From there the two-time Masters champion took a 4-3 lead before Shaw levelled, only to see Feijen, playing at his tactical best, move 5-4 ahead.

The Dutchman reached the hill two racks ahead but missed a cut on the 1. Shaw cleared and then ran the next rack to join Feijen on the hill. Shaw broke dry in the decider and Feijen had a shot one the 1. After the 2 came a good 3/8 up the side rail but later in the rack a missed 5 gave Shaw a chance.

Shaw then left a tough cut in the jaws and Feijen was back at the table. This time he made the simple 5, a 6 down the rail and the 7 and 9 for a place in the quarter-finals, where Eklent Kaci awaits.

That quarter-final will take place during the evening session, after the last 16 completes with Alex Kazakis vs. Justin Sajich and Fedor Gorst vs. Shane van Boening.

The event is broadcast globally including on Sky Sports, DAZN and Zhibo.tv. Coverage is available on Matchroom.Live in nations without a TV broadcaster. Full details can be found at www.matchroompool.com.