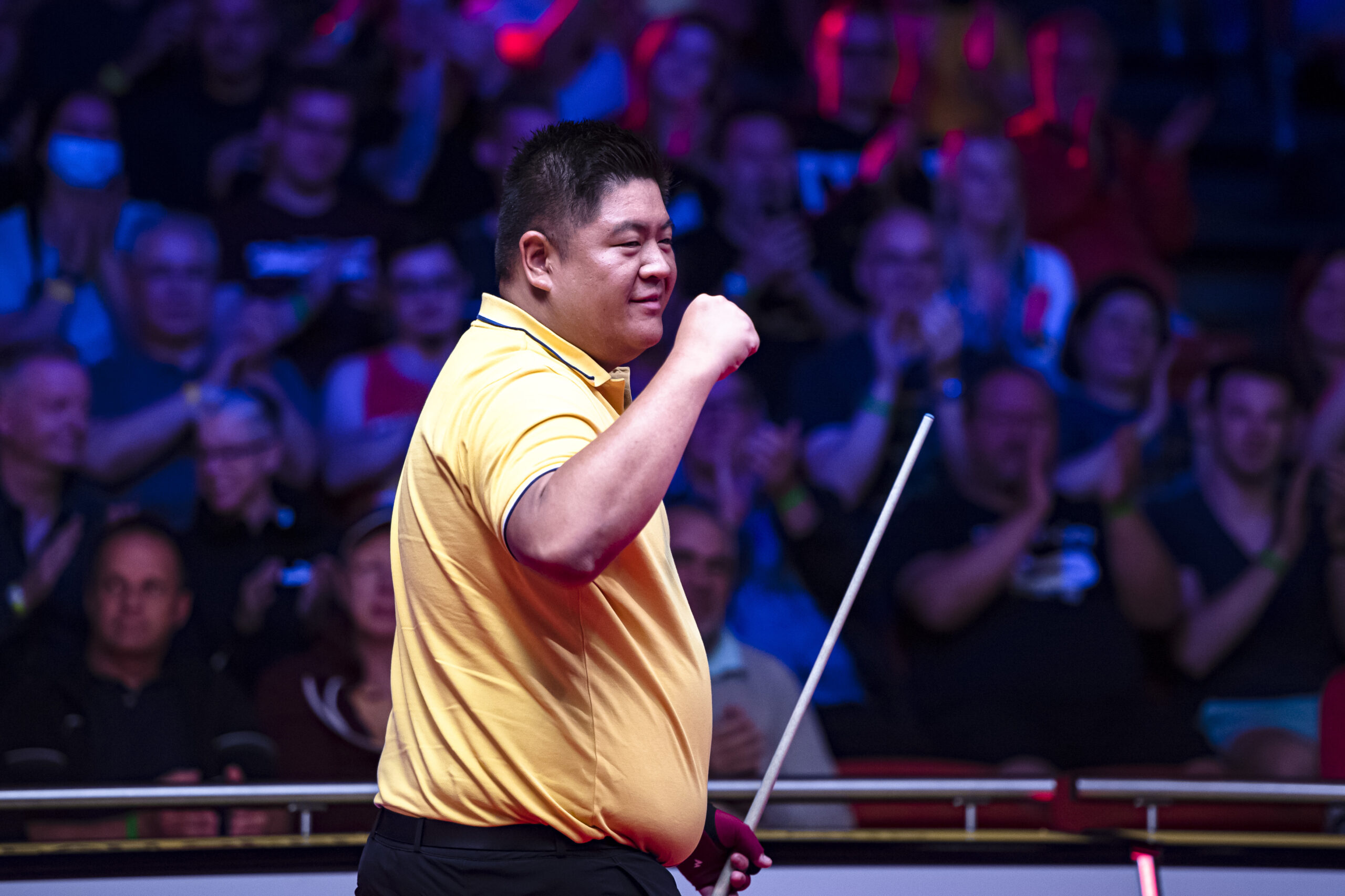 Joshua Filler crashed out of the inaugural European Open Pool Championship as only four remain at Hotel Esperanto, Fulda in Germany live on  Sky Sports in the UK and Ireland, DAZN in the USA, Canada, Germany, Austria, Spain, Italy, and Switzerland as well as on Viaplay in Scandinavia, Poland, and the Baltics and various other broadcasters worldwide including Matchroom.Live in relevant countries.

Filler came into the quarter-finals off the back of a dominant display over Jayson Shaw and the home country favourite was looking to get the better of Mario He, someone who had flew under the radar so far this week. He let Filler make the mistakes to let him in early doors and he lead 2-1 after three racks. The Austrian was strolling around the table with ease leading 5-1 when he opened up a chance for Filler after a miss on the one ball brought the Mosconi Cup star his chance to get back on the board at 5-2.

It seemed that Filler would pull back into the contest at this stage but Filler wasn’t at his best and He was back in during the eigth rack after a dry break. He was relentless and playing almost perfect pool as he ran the racks up to leave Filler in a perilous position at 9-2 down needing only two more to book a maiden semi-final appearance in a Matchroom singles event.

The 12th rack saw He break well but leave no potting angle on the one, he opted to push out only for Filler to force him back in, with that He left it open for Filler to get back in at 9-3. A quick break and run in the resulting rack put the difference to only five racks, something Filler wouldn’t be too fazed by. Filler was struggling at times with the table and a cut on the five illustrated just that to bring He back to the table who took full advantage to get on the hill at 10-4.

He broke dry in the 15th rack to bring Filler back to the table. Filler laid a brutal hook on the six which opened up the table for the German to get another rack on the scores and gather some momentum once again. Both have won the World Cup of Pool in recent times and the drama wasn’t done just yet, Filler looked to be clear through to take another rack off He only to rattle both sides of the middle pocket on the six leaving a simple table for He to book his spot in the semi-finals against former World Cup of Pool winning partner Albin Ouschan.

“I am very happy. I know it would be tough to beat Filler. I played him three or four times and it’s so hard to beat him. I had some lucky shots which helped me get off my feet. I felt like he was coming back, he always does that but then he missed the six ball and he gave me two games and let’s say, it was an easier win than it could’ve been. I was kicking good. The balls went for me. It could’ve gone the other way. I am happy I played good and the luck was on my side.” He said.

“It means a lot to be in the last eight. It is always my goal. Maybe two more matches! I hope I play like today!” – Mario He speaking to Hannah Wilkes after victory

With He and Filler doing battle, another story was unfolding on Table 2 where Spain’s Jose Alberto Delgado was making his intentions clear against Poland’s Mieszko Fortunski. The pair traded blow after blow as the contest got heated and Fortunski took control for the first time at 4-3. Fortunski came into the competition looking to go on better than his best performance in a Matchroom event to date at the World Pool Masters where he reached the semi-finals earlier this year. The Butcher had the full length of the table to deal with to make the eight on the bottom rail at 4-4 and he couldn’t do that as Delgado came back to the table to soon establish a two rack lead at 6-4 for the first time.

Fortunski wasn’t going away that easy though as it went 6-6, 7-7, 8-8, and 9-9 before Delgado seized his change to reach the hill and be one away from his first-ever Matchroom semi-final. Delgado came up dry in the penultimate rack for Fortunski to level and force a hill-hill finish. With Fortunski breaking in the last rack, he had his chance to steal it only to be caught up in a safety battle on the four which Delgado made him pay for to seal victory to shouts of ‘VAMOS!’ in the arena.

World Champion Shane Van Boening came up against a spirited Mateusz Sniegocki who was looking to cause an upset on the main table. Van Boening struggled early on despite leading 4-0 after the opening exchanges. Sniegocki breathed a sigh of relief as he got on the board at 4-1 and soon 4-2 to be closing in on the American. The South Dakota kid though already has one huge title to his name this year and he soon lead 6-2. Sniegocki had chances on a plate to keep on Van Boening’s tail and a major one came when he aimed to kick the seven ball only to scratch and put Van Boening back in to be 7-4 up.

Van Boening’s break is usually the pièce de résistance of his game but it was causing him a heap of problems as he scratched in the resulting rack. It was his second scratch of the match so far with five dry breaks, much to the USA hero’s bemusement. Sniegocki cut the deficit to two at this stage at 7-5.

SVB has been pushed hard already in this tournament and he wasn’t going to let Sniegocki get the better of him as he broke and run for the second time to make it 9-5 and be two away from the magic 11 racks. The work of Van Boening wasn’t done yet though after reaching the hill, Sniegocki pounced on another Van Boening dry break to be four away and with the break in his favour.

At 10-7, Sniegocki was left to rue bad time management that left him to rush the one ball and let the table open for Van Boening to seal his passage to the final day.

Albin Ouschan became the last player into the semi-finals minutes after Van Boening thanks to an 11-5 win over Poland’s Konrad Juszczyszyn. Ouschan took the opening few racks and after five he led 3-2. The Austrian’s pedigree can’t be understated and he was running racks for fun to lead 7-2 and seemingly already put the contest past Juszczyszyn in no part thanks to a 98% pot success rate at that stage.

Juszczyszyn had his moments but Ouschan was too strong and was two away from victory after 12 racks. The contest looked done for the most part as Juszczyszyn come back at 9-5 only for safety on the four to be in ample range for an Ouschan bank which aided him to the hill. A routine break and run gave Ouschan his victory to meet He in the first semi-final tomorrow.

Semi-Final 1 – Albin Ouschan vs Mario He

Sunday, action is available on Sky Sports in the UK and Ireland, DAZN in the USA, Canada, Germany, Austria, Spain, Italy, and Switzerland as well as on Viaplay in Scandinavia, Poland, and the Baltics and various other broadcasters worldwide including Matchroom.Live in relevant countries. See the full where to watch list here.