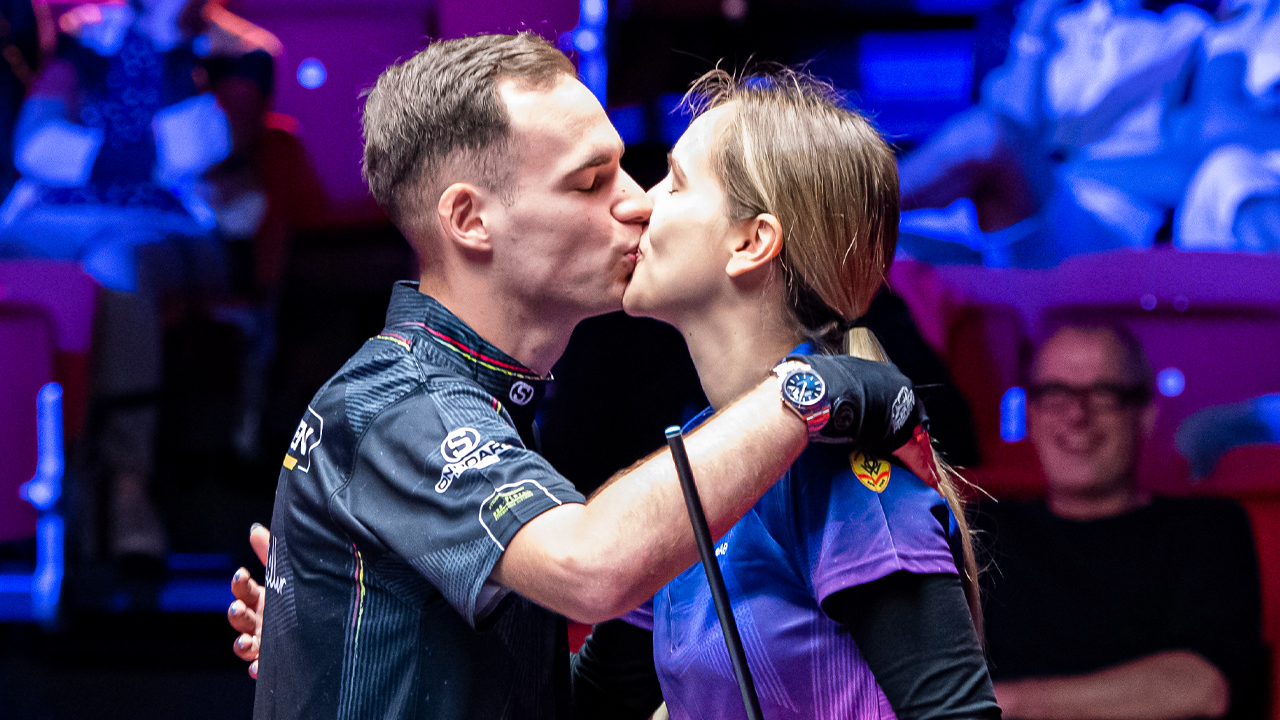 The inaugural European Open Pool Championship in Fulda, Germany at Hotel Esperanto hit the midway point as the field was reduced to the Last 64 live on the Matchroom Pool Facebook/YouTube and Matchroom.Live.

Joshua Filler’s encounter with wife Pia was the talk of the tournament as the pair met on the biggest stage for the first time live on the Matchroom Pool Facebook page. Joshua started out strongest to take the opening rack before Pia came back with her own rack to level at 1-1. The contest was played out in great spirit as the pair embraced before lagging with various applause and fist bumps keeping the atmosphere light-hearted despite a spot in the Last 64 resting on the match. It was Joshua who did steal the advantage though as he settled it in a 9-1 win.

Pia was back out in the Losers’ Qualification where she ran Chris Melling close up to 6-6 before Melling pulled through to book his place in the Last 64 and send Pia home. Other casualties included US Open runner-up Aloysius Yapp who lost out to Tyler Styer who had taken the inital initiative before Yapp pulled it back to 7-7. Mika Immonen was on the end to a 9-3 defeat to Dimitri Jungo to exit whilst Skyler Woodward faltered in a 9-4 loss to Bader Alawadhi. Alawadhi had been sent to the losers side by Jayson Shaw who came up trumps in a 9-1 win to book his own place in the Last 64.

“I played really good in that match a 9-1 win over a really good player. I tried to stay focused and I did just that. I prepared for about two months for this event. I prepared like I was going for a boxing fight really. I’ve been putting in a lot of time in on and off the table. I feel mentally a lot tougher than I did in previous events and I wasn’t really with it i if I am being honest. I am enjoying it so far.” – Jayson Shaw speaking to Phil Yates after beating Alawadhi

“It’s a really nice place (Fulda), the venue is super nice. The city is really nice too. It’s a good mix to have that around. You can go out and have a walk around. All in all it’s been a good start to the event,” Shaw added.

World Champion Shane Van Boening was made to sweat my Finland’s national champion Jani Uski as Van Boening ensured he remained blemish-free on the way to the Last 64 9-7 whilst it was a similar set of circumstances for Naoyuki Oi who side-stepped past Jan van Lierop 9-6. US Mosconi Cup hopeful Oscar Dominguez progressed with a 9-4 win over Daniel Maciol and 2021 World Pool Masters winner Alexander Kazakis overcame Tyler Styer in a hill-hill thriller to avoid the Losers side of the draw.”

Thorsten Hohmann’s bid for hometown glory was ended by Karol Skowerski in a whitewash loss for the former World Champion. Hohmann had been left on the losers side of the draw early on after defeat to Senharip Azar and the German was up against it ever since before coming against Skowerski who was in no mood in letting the local man take a hold of things.

The Last 64 draw was made at the completion of play today – see the draw above.

Day 4 Streamed Matches Below 10 am (CEST)

Tickets start from €15 for the day. Secure yours here