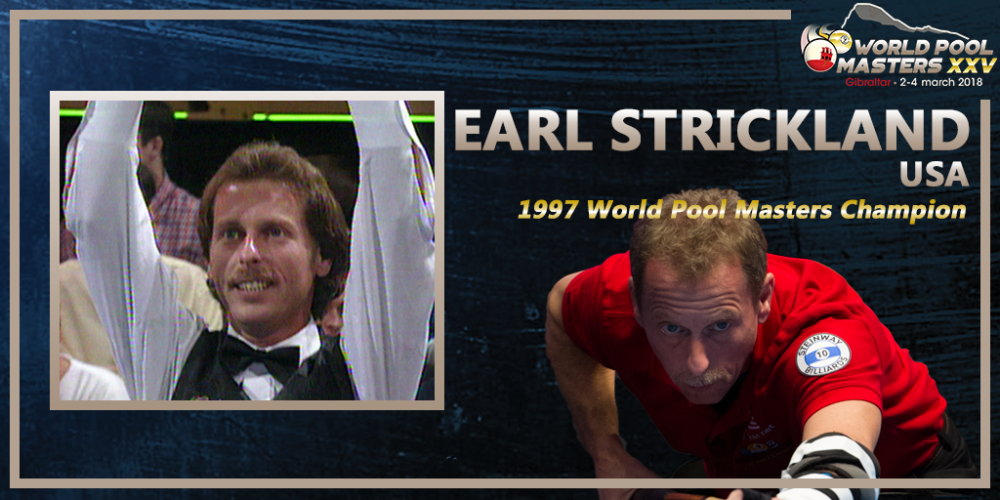 Earl Strickland, one of pool’s most decorated players, will return to the World Pool Masters this March 2-4 in Gibraltar as part of a field of former champions competing for the tournament’s 25th title.

A three-time World Champion and five-time US Open winner, Strickland has collected just about every major title in 9-ball and was synonymous with America’s success in the Mosconi Cup for over a decade. He lifted the World Pool Masters in 1997, beating Steve Davis and Ronnie O’Sullivan en route to a final against Tommy Donlon and returns in Gibraltar to bid for his second title at pool’s biggest invitational event.

Hall of Famer Strickland will be joined in Gibraltar by the likes of six-time Masters winner Ralf Souquet, 2009 champion Darren Appleton and Holland’s Niels Feijen, who lifted the trophy in 2013. More big names will be announced shortly.

“Earl is a legend of pool,” said Matchroom Sport Chairman Barry Hearn. “He is one of the sport’s most recognisable characters and has a great affinity with the European fans who love to hate ‘Earl The Pearl’ Strickland.

“His exploits in tournaments, especially at the Mosconi Cup, coupled with his exciting style of play have made Earl the sort of player you just can’t take your eyes off. He’s achieved everything there is to achieve in the game but for Strickland a second World Pool Masters title would mean just as much as everything he has already accomplished. I can’t wait to see Earl alongside this field of champions in Gibraltar.”