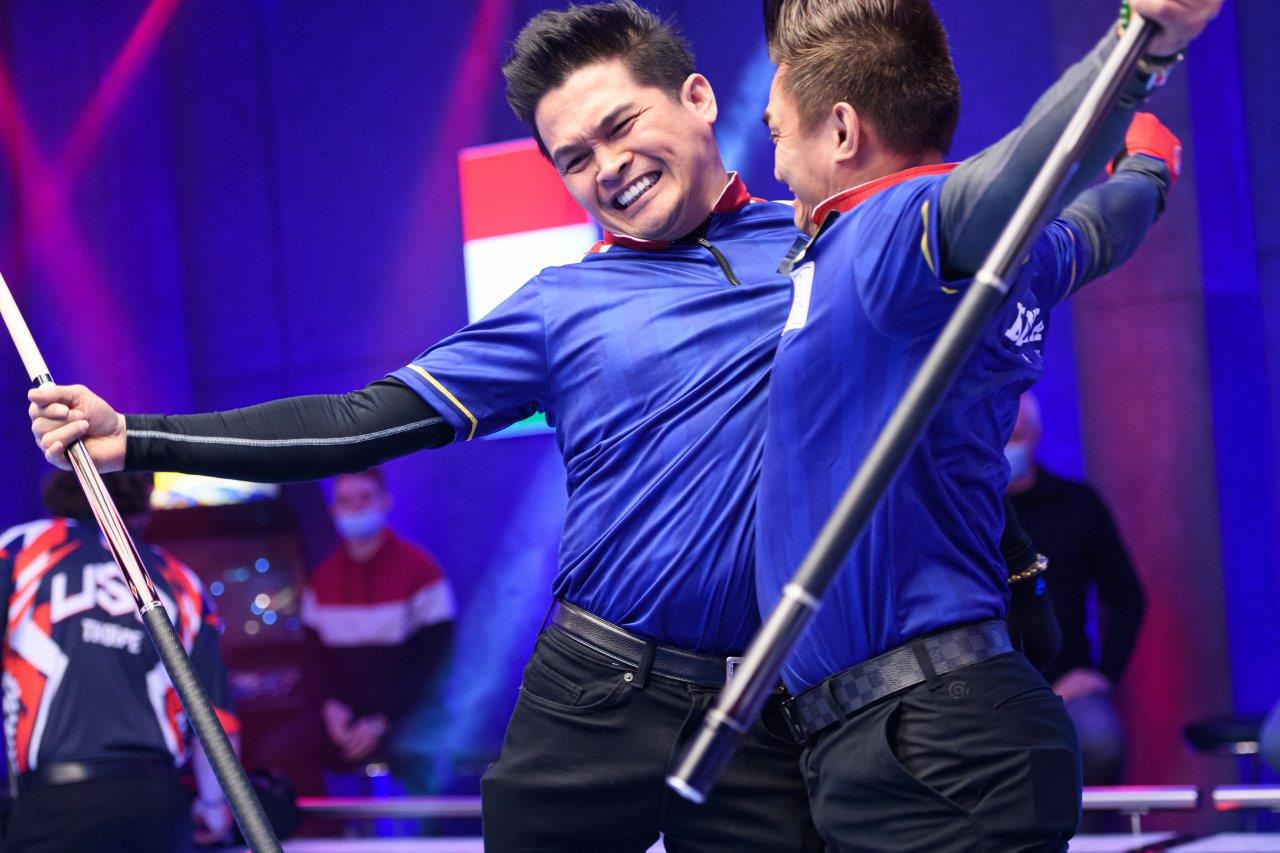 Great Britain A crashed out of the World Cup of Pool in the most agonising of circumstances as Jayson Shaw scratched with two balls remaining at hill-hill against Estonia.

Earlier in the evening Philippines had won seven consecutive racks to come from 5-0 down to beat USA in a match that had it all and will live long in the memory, while Great Britain C’s comeback continued with a 7-4 success over Greece to reach the quarter-finals.

Shaw and Chris Melling had beaten Belarus in the first round to face Estonia (Denis Grabe and Mark Magi) in the final second round fixture. Neither team were at their best in the first half of the match and after eight racks it was 4-4. The hosts looked set to move ahead until Melling scratched on the 6. Estonia did the rest and reached the hill in rack ten after some good safety play. Magi’s break wasn’t firm enough and to add insult to injury, not only did he fail to make a ball but he left a shot at the 1 for Shaw.

Great Britain A took that rack and the next to join Estonia on the hill, and though Grabe and Magi had a chance in the last, it was Shaw and Melling who were at the table when only the 5 and 9 remained. The two balls were tied close to each other and Shaw didn’t have great position. He cut the five in with pace, but the cue came off the side rail to scratch in the top pocket and Magi had a simple 9 to dramatically take a place in the quarter-finals.

Estonia will face Philippines in the last eight after Jeff De Luna and Roberto Gomez staged a dramatic comeback against America’s Skyler Woodward and Billy Thorpe.

At 2-0 down De Luna executed a great up-table bank on the 7, only to see the cue ball scratch and award USA hall-in-hand with only the 9 remaining on the table. The Americans ran the next rack fro a 4-0 lead and the Filipino mountain was growing.

They had a chance in the fifth but the 7 rattled out of the jaws for Gomez, who was lucky not to scratch. That made it too tough for Thorpe to pot, but Woodward would then get a chance after De Luna’s hit-and-hope wasn’t executed. The drama wasn’t over yet though; this time the two-time Mosconi Cup MVP failed to remove the 7 from the table. It finally went to a Gomez cut, but position was tough for De Luna who couldn’t cut it to the corner; Thorpe knocked in the gimmie and USA had a 5-0 advantage.

But Philippines weren’t done, and began to climb the mountain. The ninth was the most dramatic as again both teams struggled with the stubborn 7, but Philippines came out on top after Thorpe left it in the jaws and in the tenth the Filipinos levelled up against the odds.

They didn’t have a shot after the next break but still managed to reach the hill, and USA didn’t return to the table. The match was one of the World Cup’s best; drama, top play, and in part a story of USA failing to close out from 5-0 up, while Philippines capitalised to run a seven pack to win the match from the jaws of defeat.

Earlier in the session, comeback kids Darren Appleton and Karl Boyes took advantage of a despondent Greece (Alex Kazakis and Nick Malai). Appleton and Boyes lifted the World Cup in 2014 and were returning as a late replacement for Canada, who had been blighted with travel issues. Having beaten South Africa in the first round, their task in round two looked harder against the 2019 quarter-finalists.

However, Greece struggled at the table and though Great Britain C weren’t faultless, they did enough, with Boyes in particular not looking like a player who officially retired in 2017. With Great Britain B having gone out to Philippines in round one, and the ‘A’ team succumbing to Estonia, GB C are now flying the flag alone for the hosts after completing a 7-4 win over Greece.

All four quarter finals will be played out on Thursday, with two in the afternoon session and two in the evening. The action begins at 12noon with Slovakia vs. Japan before Great Britain C face Netherlands. The World Cup of Pool is broadcast live globally including on Sky Sports, DAZN and Matchroom.Live. Full broadcast details can be found at matchroompool.com.

DRAW MADE FOR WORLD POOL MASTERS