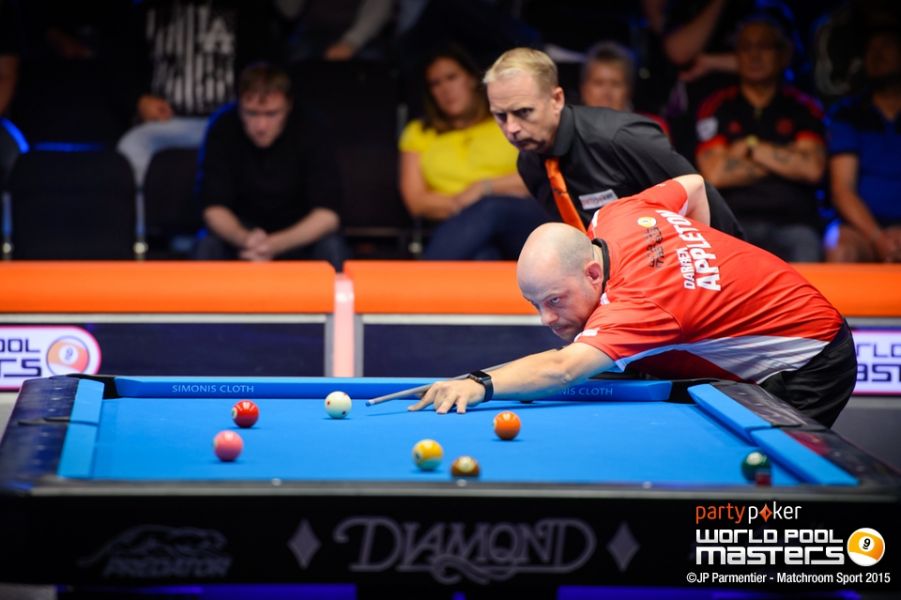 Down to the last four in Manchester

The 2015 PartyPoker World Pool Masters is down to the last four as Shane Van Boening, Darren Appleton and Mark Gray all won through their afternoon quarter-final matches to join Liu Haitao in the semi-finals on Sunday night at the Victoria Warehouse.

In the final match of the session, Mark Gray put in a terrific performance to defeat Ralf Souquet following an excellent comeback as the match slipped away from him. At 6-3 down Gray looked to have it all against him but a miss from the German put him back in and from there he never looked back.

Said Gray, “I am well chuffed. I was 6-3 down and breaking very well. I took one rack away which I should have ran out and the other times I was breaking well but the white was getting kicked and wasn’t leaving me a shot.

“Ralf got a shot every time but I stuck in there and at 6-3 he misses a long 1 ball and I cleared for 6-4. For somebody like me who isn’t known as a big breaker to get three break and runs at a crucial time is massive.

“I had it yesterday against Ko Pin Yi. I was 7-3 up and he is known as one of the biggest breakers in the world and I went from 7-3 to 7-5 up without getting a shot and you think you are going to lose 7-8 without getting another shot.

“Today I was in his position at 6-3 down but I knew if I could make balls off the break and have a shot I could still win, and that is what happened.

“I am as good a potter as anybody else but breaking wise there are bigger breakers here than me. But I found the break and was running out there to win the match.

“Ralf has won this six times so it is a great scalp for me. At 6-3 down, I have to be honest, I didn’t think I would win. To beat Ko Pin Ye and Ralf Souquet is two massive results.

“I don’t expect any mistakes from Darren tonight and I expect him to clear up every time. I know I have to do the same if I am to give myself a chance.”

Shane Van Boening set up a highly anticipated semi-final with Liu Haitao as he came through his quarter-final match with Waleed Majid. The South Dakota Kid moved into a quick 4-1 lead and then 6-3 before the Qatari mounted a comeback.

With the score at 5-6 and breaking, a dry one proved to be Majid’s downfall as Van Boening ran out and then took the 13th game for the win via a flukey 9 ball.

Explained Van Boening; “I tried to make the 3 but I knew it would hit the 9 and it would move around somewhere, and I ended up making the 9-ball.

“I got a lot of fortunate rolls but I started to feel more comfortable when I won the first rack, I didn’t feel too much pressure and I just tried to go out there like I was practicing.

“The breaks were dry throughout the middle of the match for both of us. I managed to figure out the break a little bit and I got some fortunate rolls. I will work on the break again before the next match. I want to do something a little bit different.”

In an entertaining albeit error-strewn match, Darren Appleton made it through to the semi-finals with an 8-5 win over Johnny Archer. Like his first round match, Appleton moved into a 4-1 lead with some excellent play but derailed himself as he made a poor error to snooker himself with just three balls on the table. His jump shot flew off the table and Archer cleared up to reduce arrears to 4-2.

Archer then tied it up at 4-4 but Appleton took the next two but scratched on the break and Archer cleared for 5-6. A dry break just when he didn’t need it gave Appleton the chance to get to the hill at 7-5. Archer had a chance to stay in the match but he missed a 1/2 combination and that allowed Appleton to run out for the win.

“I felt great, ten times better than yesterday. I felt perfect going into the match and I set off on fire to get to 4-1, playing perfectly really.

“I got really unlucky at 4-1 to go 5-1 up when I potted a ball in the middle, it came off the top rail, kissed the 6 and I snookered myself. That knocked my momentum then and I played a bad safety.

“He broke and run to 4-4 and I am back under pressure. He is a great player so the game can change very quickly but thankfully I managed to keep myself calm. I was pleased I managed to hold myself together when he came back to 4-4 and come with a couple of good finishes when I needed to.

“That match was the best I have felt in a pressure situation for a while, maybe because I haven’t played a lot of pool this year,” said Appleton.

“Winning yesterday was big and in that match I felt great. The break is big and I got a couple of bad rolls on the break but luckily for me Johnny missed three or four balls in the match. The break is inconsistent so you need to hope you have enough chances to win.

“The players are looking to hit the break a lot harder than usual because it is difficult for the referees to get the balls touching because we are using a wooden rack.”

“I have a great record against Mark Gray. It would be good for England because then we are guaranteed an Englishman in the final.”

Play continues on Sunday evening with the semi finals followed by the final.

Pool’s biggest invitational event, the PartyPoker World Pool Masters features 16 top players from around the world competing for a $70,000 prize fund and the prestigious title. There is a high-quality stream available for $10.99 for the final days action through www.matchroompool.com

Tickets are priced at £5 for Sunday afternoon, and £10 for Sunday evening sessions. To catch all the 9 ball action there is a great value season ticket taking in all sessions for just £30 available from the venue Box Office.

Liu through to semis as Souquet and Archer roll back years

Shane is a two-time Master