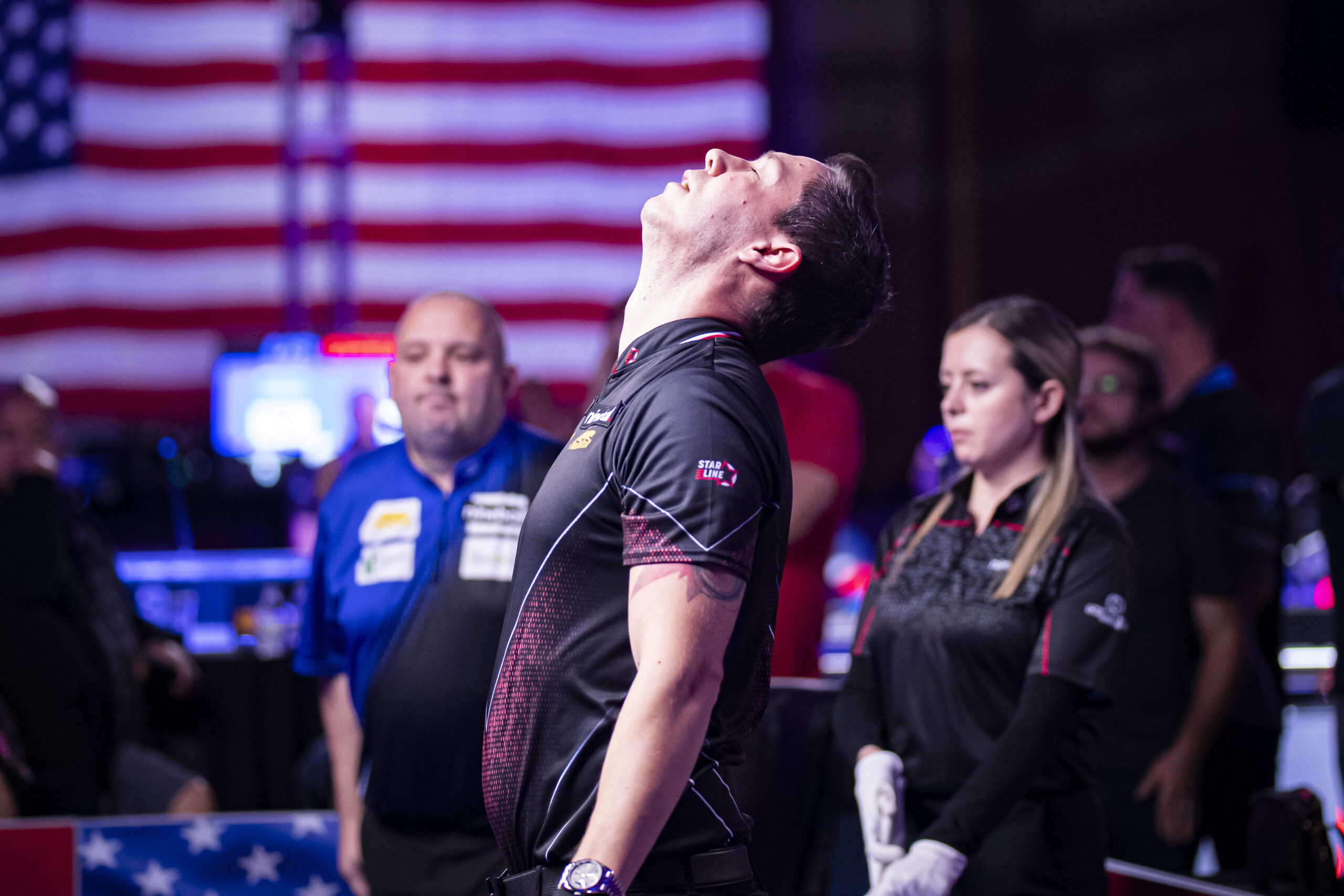 Defending champion Biado was quick out the blocks against Hsieh Chia Chen and he never looked back as he rattled in a mammoth whitewash win without real fluster. It was clear Hsieh was struggling at the table, Biado left it open for the first time at 4-0 only for Hsieh to miss the six and allow Biado to go 5-0 up. A 2-9 combo from Biado put him on the hill after Hsieh had a chance at the table only to be hooked when lining up the 2 for a combo on the 9. Biado’s celebrations were held off temporarily after he thought he’d made a golden break in the last rack only to scratch. Hsieh had his time at the table, but it wasn’t his day as Biado sealed an emphatic win. Biado takes on Sanchez Ruiz next.

Sanchez Ruiz went toe to toe with close friend Alexander Kazakis with the latter looking to join FSR in the automatic spots for the 2022 Mosconi Cup at Bally’s Las Vegas. Kazakis had the first scare in the third rack at 2-0 down when he rattled the nine down the rail and was fortunate to see it drop and avoid Sanchez Ruiz leading 3-0. The Greek continued to push back, and it was soon 3-3 and 5-5 with not much separating them. They went toe to toe at 7-7 before Sanchez Ruiz scratched early in the 15th rack. Kazakis was up swiftly to edge ahead again. In the next rack, Kazakis thought he’d made the five safe, but Sanchez Ruiz had other ideas as he made it in the middle pocket when kicking at it before clearing up in the following two racks to seal it 10-8.

Over on Table 1, Lechner was the first to book his place in the last four after seeing off a valiant Chris Melling. Lechner will appear in his first Matchroom event semi-final after a convincing 10-4 win over the Brit. Lechner was setting the early pace to win the opening rack before both got stuck in a deep safety battle around the table before a leveler at 1-1. Lechner from there found a gear and raced into a 5-1 lead to be five away from a slice of his own history as the first Austrian to ever reach the semi-finals of the US Open.

He was soon writing himself into the history books as he rallied up to a 9-3 lead. Melling did pull one back, but Lechner made his way through to jubilation.

Lechner: “First of all, it is the biggest relief in my life after messing up in multiple quarter-finals. This time, I beat the demons in my head, and I came through it. I played well. I had a few rolls. Chris is a great player. I like this break rule, it suits me.  It’s every pool player’s dream to win this trophy, it would mean the world to me if I got it done tomorrow.”

The last quarter-final action to wrap up saw Kaçi fresh off the back of a dismantling of Joshua Filler 10-1 in the Last 16 against Ko Ping Chung, who was made to sweat by Finland’s rising star Jani Uski.

Ko was aiming to emulate Kevin Cheng’s US Open triumph for Chinese Taipei whilst Kaçi was on the hunt to avenge his loss in the 2017 final against Jayson Shaw. It was Ko who took the early exchanges better than Kaçi who could perhaps be forgiven for his slow start at 3-1 down. Kaçi had his moments and trailed at 5-3 when back at the table to gather some steam and level at 5-5. Ko capitalised on Kaci’s miss on the eight ball in the next rack to make it 6-5 and soon 7-5 to be three away.

Kaçi looked out of sorts at 7-6 missing a seven that could’ve put him level and Ko did the rest to establish a two-rack buffer again. The Kaçi fightback continued though, and he levelled at 8-8. The final downfall for Kaçi was soon around the corner though, a long raking two rattled the pockets and popped out to give Ko the table and his opening to run to the finish line 10-8.