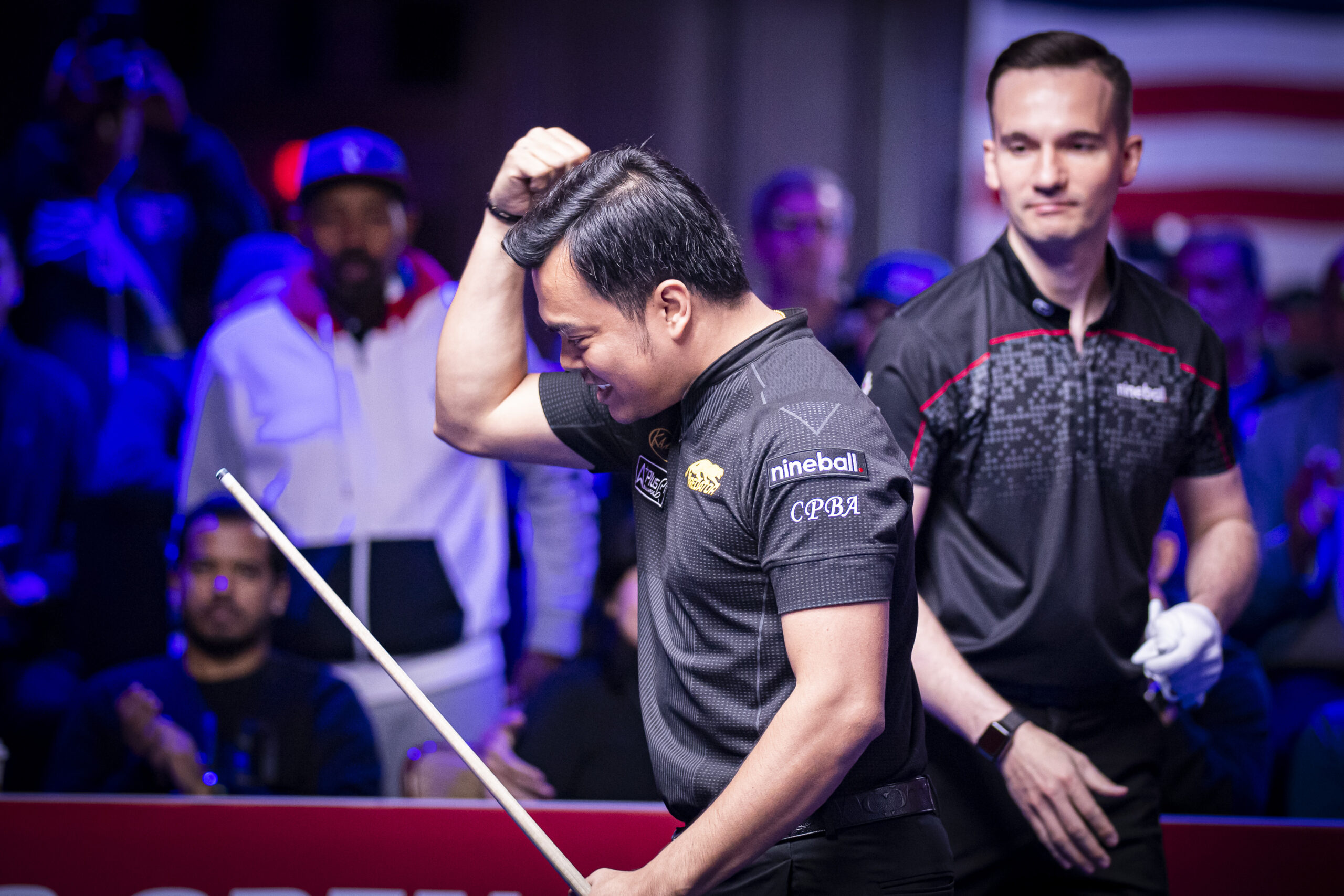 Carlo Biado’s march to retain his US Open Pool Championship crown at Harrah’s Resort, Atlantic City continued after the Filipino saw off Konrad Juszczyszyn in the Last 16 10-7 to set up a quarter-final tie with Hsieh Chia Chen.

Biado has had moments of concern at various points over the last week but the stiffest came as Juszczyszyn got firing to threaten his reign as champion. Juszczyszyn trailed at 6-2 before putting himself back in the contest at 6-5. The Pole currently sits inside the top 20 on the Nineball World Rankings and he was justifying that position as Biado looked out of sorts at 7-7. The Biado performance was steely though and he soon wrapped up the final two racks to pounce on a Juszczyszyn error and reach the quarter-finals.

Eklent Kaçi put on his best performance of the year to date as he delivered a breaking masterclass to defeat 2019 champion Joshua Filler 10-1 without too much trouble. The Albanian broke and won in nine of the ten racks he won, most importantly potting 98% of attempted shots making it an almost flawless performance as he eyes bettering his runner-up finish in the 2017 final.

Francisco Sanchez Ruiz was buoyed by the news of making his first Mosconi Cup yesterday and he booked a quarter-final berth after overcoming the tricky Chang Jung-Lin. Jung-Lin set the early pace to lead 3-2 but Sanchez Ruiz came back to lead again at 4-3. The brakes were truly off for Sanchez Ruiz as steam gathered putting him 8-4 to the good and two away from the quarter-finals. FSR was hooked on the two ball in the penultimate rack to hand Jung-Lin the table and cut the deficit but it was short-lived after he missed a bank to allow Sanchez Ruiz to make the jump shot and capitalise and seal a win.

The day had begun in emphatic fashion for Chris Melling who showed his 9-ball pedigree with an astute 10-2 dismantling of Lee Vann Corteza. Melling has been finding his feet in recent days on the 9ft Diamond Tables and his good form continued as he kept the foot on the gas to beat the 2013 World Cup of Pool winner. Next up for Melling is Max Lechner of Austria.

Lechner came through his own Filipino test against Roland Garcia 10-5 with little worry whilst Alexander Kazakis set up a tie with Sanchez Ruiz thanks to a gripping win over the Netherlands’ Marc Bijsterbosch. Meanwhile, Mario He’s efforts of reaching the Mosconi Cup from the automatic spots were ended by Hsieh 10-8 whilst Jani Uski’s run was ended by Ko Ping Chung.

The SVB Junior Open reached the closing stages during the afternoon session as Khalid Alghamdi and Trenton White reached the final to battle it out for their slice of the $10,000 prize fund after both ran out winners against Kashton Keeton and Landon Hollingsworth respectively. The final will be broadcast live on YouTube here.