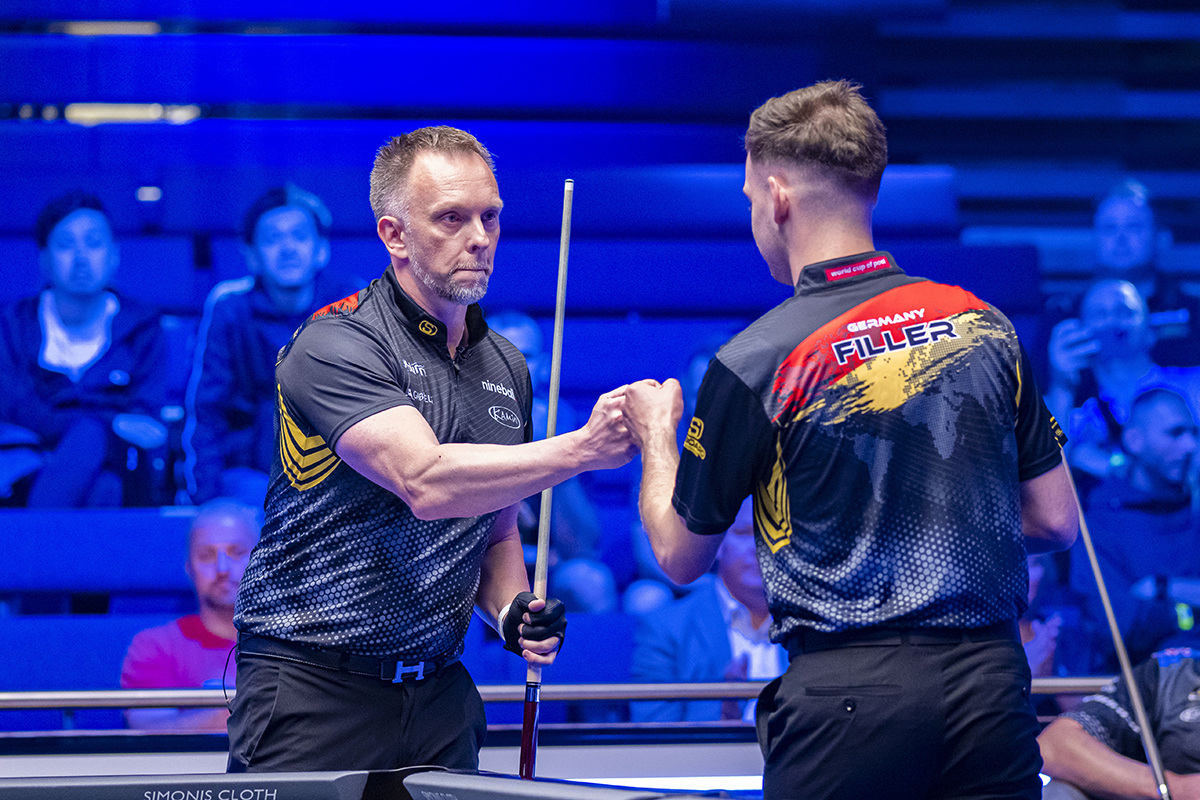 Defending champions Germany sailed through their opening encounter with New Zealand 7-1 as the 2022 World Cup of Pool got underway at the Brentwood Centre, Essex live on Sky Sports Arena in the UK, DAZN in the USA, Canada, Spain, Italy, Germany, Switzerland, Austria, and Viaplay in Scandinavia, the Baltics, Netherlands, and Poland. Matchroom.Live in territories without a broadcaster.

Germany’s near pairing of UK Open and World Pool Masters winner Joshua Filler and former World Champion Thorsten Hohmann come into the tournament as one of the favourites as they look to become the first nation to defend the title whilst New Zealand’s Matt Edwards and Simon Singleton were flying their countries flag for the first time since 2019.

New Zealand won the lag but that was a rare highlight early on as Germany looked to build up some steam. Both teams struggled with the early pace of the table with Singleton missing the three to the middle pocket and opening the table for Filler and Hohmann to make the early move at 1-0. There were chances for New Zealand despite being 4-0 down but they seized their chance in the fifth rack after a brief exchange led to Filler missing a bank on the 9-ball and allowing their opponents the chance to be on the board at 4-1.

It was a tough day at the office for New Zealand through with errors being their downfall early on and Germany just too hot to handle late on as they wrapped up a 7-1 victory to set up a second round clash with either the Netherlands or Morocco later this week.

Chinese Taipei are no strangers to the World Cup either as they made a triumphant return to the fold for the first time since 2019 against debutants Argentina. Ko Brothers of Pin Yi and Ping Chung will be feared throughout the tournament, and they sent their warning signs as they moved past Ariel Casto and Sebastian Rodriguez 7-2 to do their work early in the tournament.

Casto and Rodriguez could count themselves to be unfortunate early on as Chinese Taipei took the early rolls to lead 3-1. Pin Yi won the tournament in 2015 with Chang Yu-Lung and with his younger brother alongside him this time, Ping Chung upped the ante to put them two away at 5-1. Argentina was soon gifted their second rack to be 5-2 behind after Chinese Taipei lost their position on the eight. Argentina’s optimism soon came crashing down though as the Ko brothers rattled up a 7-2 victory to meet either Greece or Cyprus next.

The afternoon session concluded with Albania’s Eklent Kaçi and Besar Spahiu who met Italy’s duo of Francesco Candela and Daniele Corrieri. Corrieri is no stranger to big moments much like Kaçi with success in beating Skyler Woodward at the World Pool Championship back in April whilst Kaçi’s Mosconi Cup pedigree came to roost as Albania did their work in a 7-2 win.

There were some early nerves from both sides but Kaçi’s know-how around the table eased Spahiu into proceedings. Spahiu broke well in the second rack to leave a carom on for the 9 to sink and put Albania 2-0 up. That momentum continued at 3-0 before Italy got on the board with a neat piece of safety. Albania continued on their way at 5-1 with relative ease as Italy did get back another rack only for Kaçi and Spahiu to wrap up their win and face either Spain or Australia next.

Action continues from 5 pm with the USA against Canada live on Sky Sports Arena at 5pm as well as live on DAZN in the USA, Canada, Spain, Italy, Germany, Switzerland, Austria, and Viaplay in Scandinavia, the Baltics, Netherlands, and Poland. See the full list of broadcasters here including Matchroom.Live if no broadcaster is available.