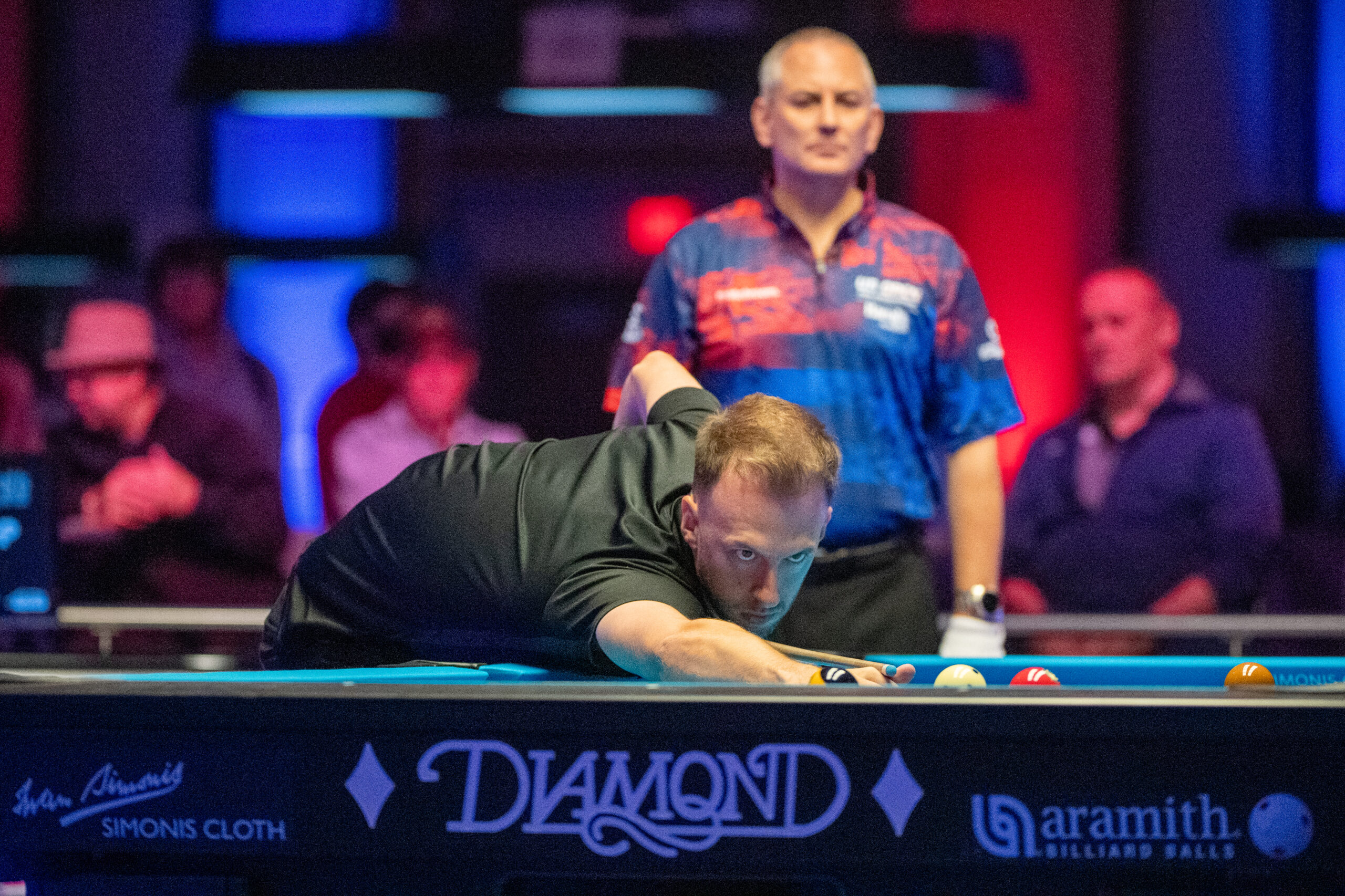 Day two of the US Open Pool Championship at Harrah’s Resort, Atlantic City in partnership with Caesars Entertainment and the Atlantic City Sports Commission saw the top seeds rumble on through into the next stage of the winners’ rounds whilst many hopes and dreams were dashed as the first round of the losers bracket were concluded.

Naoyuki Oi began the day as the main focus on table one against Kuwait’s Mohammad Almuhanna and he made the most of it sealing a 9-3 win and a space in winners’ round two where he will take on Roland Garcia as matches turn to a Race to 11.

Jayson Shaw followed up with a display worthy of being the 2020 Mosconi Cup MVP as he bypassed Daniel Dagotdot of the Philippines in a donut to set up a tricky clash against Hsieh Chia Chen on the same side of the draw as Oi.

Judd Trump’s first foray into 9-ball pool cruised on after some early nerves against India’s Dhruvalkumar Patel. The Ace in the Pack was 3-2 up but pulled away at that point onwards to seal a 9-2 win. His experience on the green baize of snooker proving to come in at the ideal time with a cruel snooker on the two in the 10th rack.

Kelly Fisher set up a tantalizing match against Niels Feijen after overcoming Kristina Tkach with KwikFire beating the Russian for the second time in a matter of days after beating her in the WPBA Sondheim Kiwanis Invitational final on Sunday. Tkach kept her chances going in a nail-biting 9-8 win over Vincent Cimarelli.

A packed arena also witnessed Earl Strickland put on a show as he beat Christopher Pyle in a whitewash. The highlight from the Pearl coming in the fourth rack with a golden break. Fellow Americans Skyler Woodward and Shane Van Boening had varying degrees of ease to beat their respective opponents but both moved into winners round three. Woodward will face Mario He next and SVB will face World Under-17 champion Moritz Neuhausen of Germany tomorrow.

Two-time winner Mika Immonen kept up his unbeaten start to the week beating Michael Yednak meaning he will take on Carlo Biado of the Philippines tomorrow live on the Matchroom Pool YouTube. Fedor Gorst also maintained his 100% status in a comprehensive win against John Moody Sr. Gorst’s opponent in winners round three will be Roberto Gomez who overcame Lukas Fracasso-Verner on Table 7.

There was an early upset in the Diamond Arena though, the World Pool Championship runner-up Omar Al-Shaheen suffered a shock defeat to James Prather to put the Kuwaiti into the losers bracket before he beat Nathan Wallace to avoid going home.

Joshua Filler continued his journey to claim the crown for a second time, this time against Thomas Haas live on the Matchroom Pool YouTube. The Killer will face off against Sanjin Pehlivanović in the next stage. Pehlivanović sealed his route to face Filler after beating Muhummed Daydat 9-3.

Day three of the US Open Pool Championship gets underway from 10 am ET with Filler’s contest against Pehlivanović before Trump takes on Abdullah Al-Shammari.