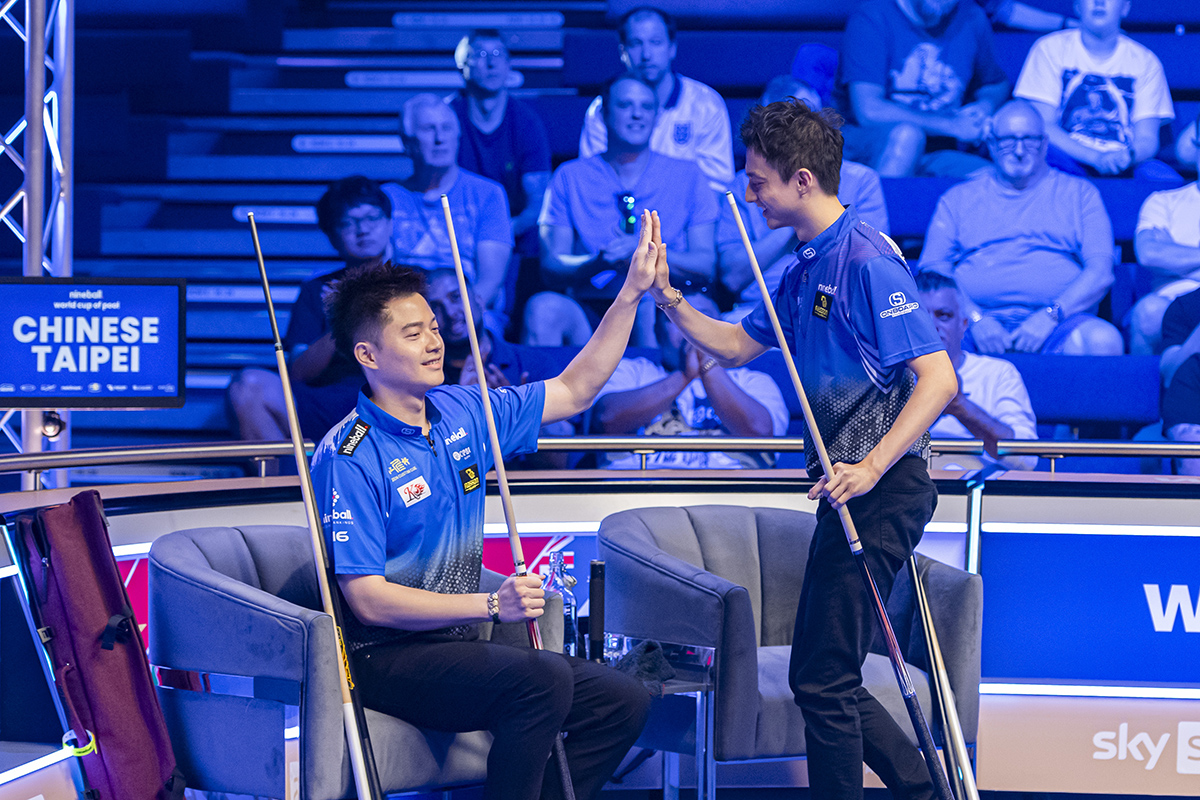 Chinese Taipei and Singapore are into the semi-finals of the 2022 World Cup of Pool at the Brentwood Centre, Essex live on Sky Sports Arena in the UK, DAZN in the USA, Canada, Spain, Italy, Germany, Switzerland, Austria, and Viaplay in Scandinavia, the Baltics, Netherlands, and Poland. Matchroom.Live in territories without a broadcaster.

Niels Feijen and Marc Bijsterbosch were fresh off the back of defeating defending champions Germany and it was the Dutchmen who won the lag against Chinese Taipei before taking the first rack despite Ko Pin Yi’s best efforts with the jump cue. In the second rack, Bijsterbosch laid a snooker that Pin Yi couldn’t get out of to foul opening it up for a quick second rack for the Netherlands.

Pin Yi accompanied by brother Pin Chung on the Chinese Taipei side got back into things just before the commercials at 2-1, thanks to Bijsterbosch scratching when playing a kick on the one. The pair struggled in their win over Greece yesterday morning, but they looked more themselves as they turned the contest around to lead 4-2 thanks to some exquisite cueing.

The Dutch were sat in their seats for a while, but they changed after Ping Chung scratched when making the four ball by going in off the six in the middle pocket. The chance that was presented was converted and they were one back. Ball in hand came to the forefront of the next rack for the Netherlands as Feijen missed a thin cut to give Chinese Taipei control of the table once again to run out and be 5-3 up and over halfway.

Bijsterbosch played a lovely kick and combo on the 3-7 to give the Netherlands a fighting chance in the following rack. Feijen proceeded to play a safety and Pin Yi exposed the three for the Netherlands to come back again at 5-4 and 5-5 thanks to a break and run.

Chinese Taipei were looking to reach their eighth semi-final in the competition’s history, and they were moving one step closer to being within a shout of winning the title again after Bijsterbosch missed the six up the table in the 11th rack to hand Pin Yi and Ping Chung their moment to string three racks together and be on the hill. It was relatively plain sailing for Chinese Taipei, and it seemed they were going to run away with it.

At 8-5 up, Ping Chung missed the 3-8 combo to bring Feijen back to the table who delivered where his opponent couldn’t to keep the Netherland’s hopes alive as they trailed by two. That mistake was costly as Bijsterbosch and Feijen ran the next rack to be one behind. A further Dutch break and run brought the match to a hill hill conclusion.

Bijsterbosch broke in the decider but left Feijen with a tricky effort to stay at the table. A brief safety exchange later and Ping Chung had a shot on the one only for it to collide with the seven up table and leave the table just a complicated. After putting away the one, another safety battle ensued on the two with Feijen tucking the cue ball neatly behind the five away from the two. Ping Chung got a good hit on the two but too cleanly allowing Bijsterbosch back to slow roll the two in but again leaving Feijen short of a clear shot on the three ball this time.

Pin Yi played a beautiful safety to keep the cue ball locked up but this time behind the eight. Bijsterbosch fouled and in the process potted the six to open the table even further. Ping Chung and Pin Yi’s hopes of another title for Chinese Taipei were kept alive as they wrapped up a 9-8 victory.

Aloysius Yapp and Toh Lian Han were looking to venture into unfamiliar territory for Singapore as they met Finland’s Mika Immonen and Jani Uski for a spot in the semi-finals.

Singapore won the lag before a quick break and run helped them to an early lead. Lian Han had a wild go at the three ball to offer Finland their first chance at the table in the second rack but they couldn’t make it pay after Immonen fouled with the ball off the table when locked up behind the seven. From there, it was a relatively routine run out to put the Southern Hemisphere side two up. Rack three was more of the same as far as Singapore were concerned and they were three up at the commercials.

To his frustration, Yapp missed the cut on the three in the fourth rack and Finland had their chance only for Singapore to end up back at the table. Lian Han missed the nine and Immonen had the chance to pot Finland’s first ball of the match only to miss it. Yapp tried to slow roll it in but missed it as Uski closed it out for 3-1. Lian Han’s nerves were tested in the next rack too as he missed the two to allow Finland back in to snatch another at 3-2.

The contest seemed to be turning at that point but Yapp and Lian Han stole the next rack to asset a two-rack buffer once again. Into the seventh and Lian Han broke dry to allow Finland back to the table where Immonen and Uski reduced the scoreline to one once again at 4-3. Singapore were trying their best to pull away and they asserted a three rack gap again after the ninth rack for 6-3.

Lian Han was struggling out in the arena and a scratch on the break brought Immonen and Uski back in again at 6-4. It was a nervy affair throughout with so much on the line and Singapore couldn’t quite contain them as they lost the 11th rack. With the safety laid, Immonen went airborne and delivered a majestic jump shot on the one only to leave Uski hooked. Uski fouled to give Singapore ball in hand, but they failed to make it count as Lian Han twitched on the five.

Finland went level again at 6-6 but that was their last real moment of the match as Singapore came good eventually to seal a 9-6 victory and reach the semi-finals. Singapore taking their moment in the 13th after Immonen’s break left the Fins hooked. Lian Han’s earlier nerves were arrested, and Singapore closed it out.

Action returns from 5 pm with the USA in action against Switzerland before Great Britain meet Spain live on Sky Sports Arena as well as live on DAZN in the USA, Canada, Spain, Italy, Germany, Switzerland, Austria, and Viaplay in Scandinavia, the Baltics, Netherlands, and Poland. See the full list of broadcasters here including Matchroom.Live if no broadcaster is available.