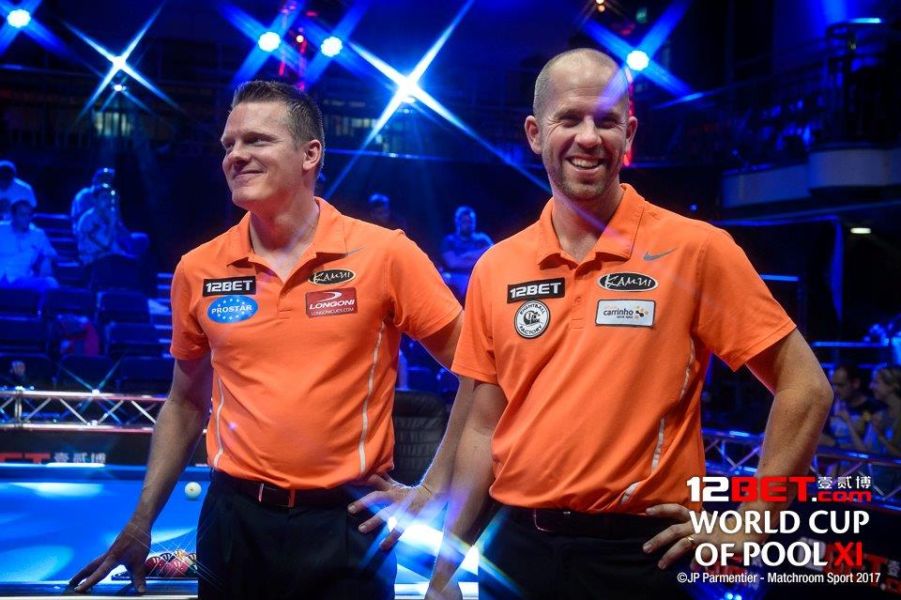 China, Holland and Austria through

THERE WERE wins for the big guns of China, Holland and Austria as the first round of the 2017 12BET World Cup of Pool moved towards its closing stages at the York Hall, Bethnal Green.

China, who with Wu Jiaqing and Dang Jinhu, looked to be one of the tips for the championship, had a real struggle on their hands to get past qualifiers Portugal in their first-round match-up. They lead 4-0 then 5-1 before the Portuguese pair, who won through a big qualifying tournament in Austria last year, got their break going.

With some solid shot making and some combinations the 9, they soon clawed their way back into it and were breaking at 5-5. However, class prevailed as the Chinese pair got back to the table and converted their chances to run out 7-5.

Two-time World Cup of Pool runners-up Holland easily negotiated their opening first round match as they hammered Hungary 7-0. It was the ever-reliable pairing of Nick van den Berg and Niels Feijen who once again looked solid as they had too much for the Hungarian pair of Gabor Antal and Gabor Solymosi. They now play old nemesis the Philippines in the second round.

Feijen said, “We got off to a great start and the break was clicking really well. Nick played some really nice recovery shots and overall played a really solid match.

“Everybody remembers one ball in 2014, the missed 8 ball that was the climax of the event but we played really solid that year and in 2013 – one ball is one ball and if we can play at that level again we can go all the way.”

Van den Berg added, “Normally you try and make a ball on the break but with this rule you’re trying to control the one ball. I hit the knuckle of the side pocket a few times so we had a tough shot sometimes to start but we played solid and made some good outs.

“We have some bad memories of playing the Philippines – we lost the final 10-8 here in 2013 and we are here to take revenge.”

In the final match of the afternoon, Mario He and Albin Ouschan of Austria struggled to get past Sweden but despite going from 6-2 to 6-5 against Marcus Chamat and Daniel Tangudd, the Austrians held on the reach the second round.

Play continues Thursday evening afternoon with one more first round match and two second round matches:

Japan and Finland first through to quarter finals