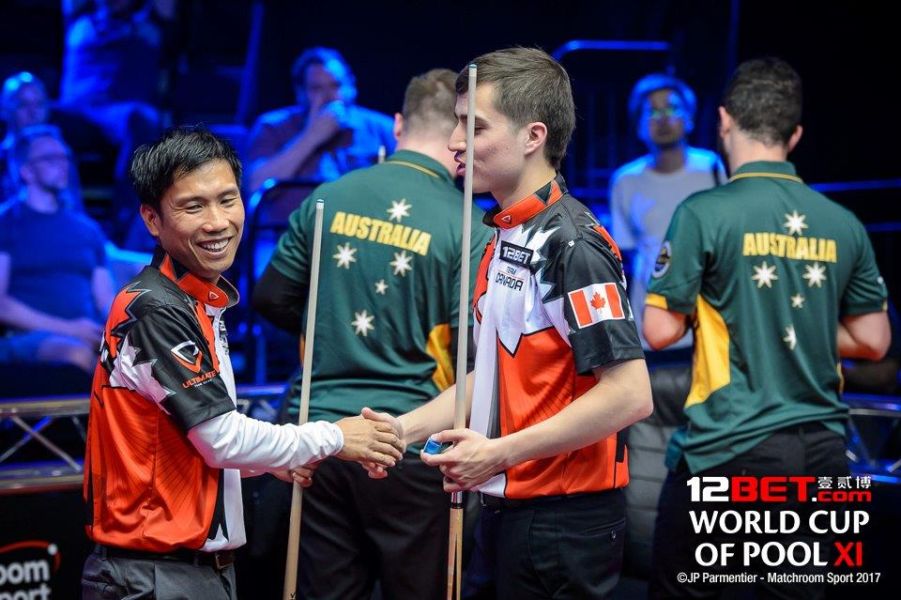 Canada through after struggle against fighting Aussies

Canada looked as if they might be the first seeded to team to fall by the wayside as they trailed Australia 5-4. However, Justin Campbell and Michael Cacciola failed to seal the deal and Australia will need another year to record their first ever win in the World Cup

John Morra, who is now semi-retired from the game, said, “We were happy to get through our first match. There is a lot of pressure here and we haven’t done particularly well over the last few years. You could see some of our shots were a bit shaky. Sometimes we put a little too much pressure on ourselves.

In the opening match of the tournament, former champions Ralf Souquet and Thorsten Hohmann (Germany) eased their way into the second round as they defeated Malta, a last-minute replacement for visa-less South Africa. A big early lead was too much for the Maltese pair of Tony Drago and Ryan Pisani.

“It is always a little difficult going into the first match of an event because you never know what is going to happen and how your form will be. It went well, even though I made too many mistakes personally”, said Souquet.

Hohmann added, “I couldn’t quite figure the table at the beginning so I made some positional errors. Ralf made some good shots to keep us in the match and fortunately for us Malta made a few mistakes, which helped us to get into our game and develop a rhythm. We are harmonised as a team, we have played in the World Cup many times and we have won it too. We need to figure out the break and then get the feel of the table and get comfortable.”

The perennial Russian pairing of Konstantin Stepanov and Ruslan Chinakhov enjoyed a brief outing as they pasted Malaysia 7-0 to move into round two. Malaysia had never advanced to round two of this tournament and never looked close this time. Watched by their coach, Johan Ruijsink, the Russians looked solid throughout.

Chinakhov said, “It feels like we have played together 1,000 years. We have always played this tournament together and we know each other’s game very well – we don’t need to talk too much. We have a good connection.”