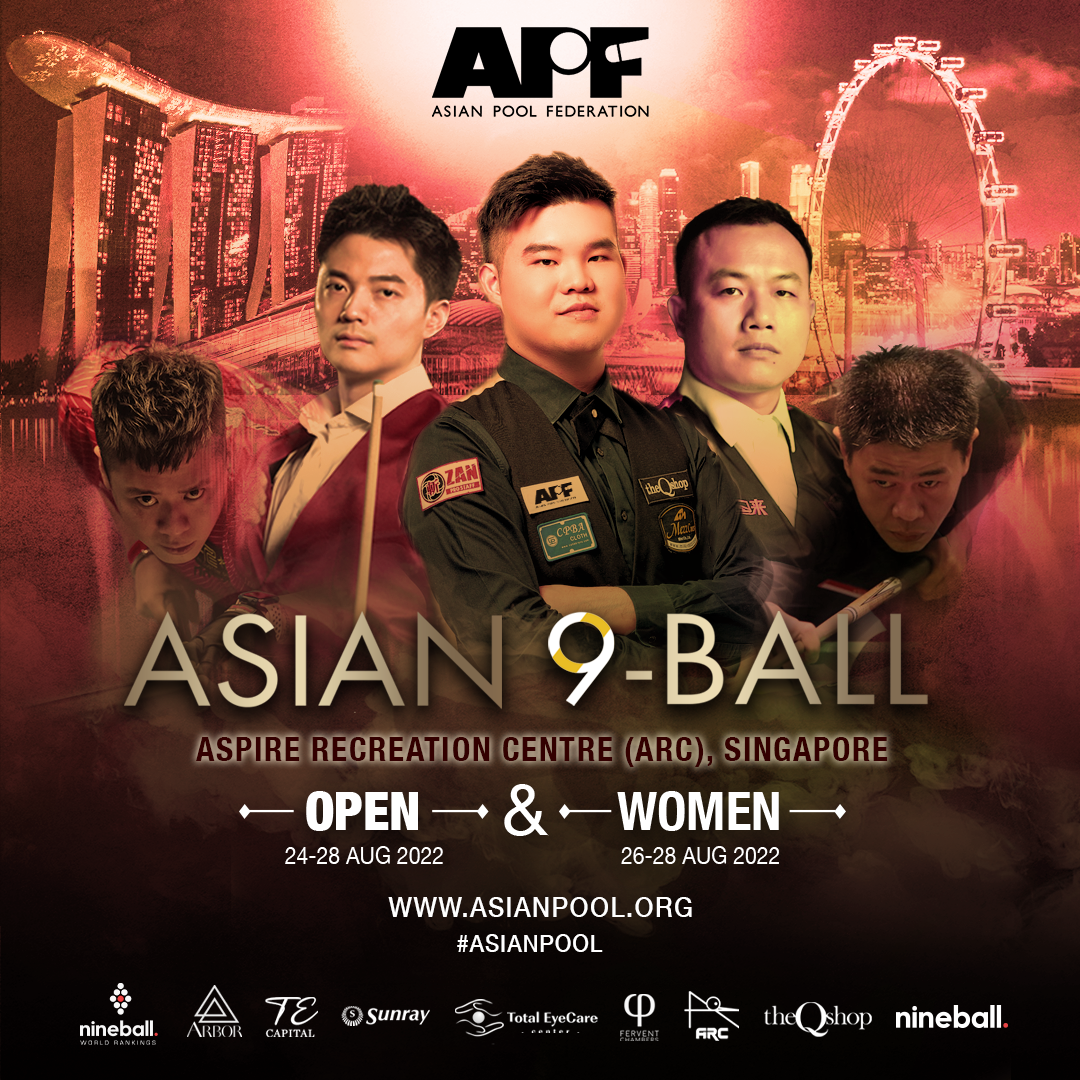 Matchroom Pool is delighted to confirm that The APF Asian 9-Ball Open 2022 this August 24-28 in Singapore will become the first ranking event in Asia on the Nineball World Rankings with the tournament organised by the Asian Pool Federation set to welcome some of the world’s biggest names led by US Open runner-up and Singaporean Aloysius Yapp.

The addition of the tournament marks a major moment in the inaugural year of the Nineball World Rankings with the eventual winner of the APF 9-Ball Asian Open set to take home $10,000 in a maximum field of 96 and an entry fee of only $200. Fans will be treated to seeing some of the biggest names alongside Yapp including Ko Pin Yi, Ko Ping Chung, and Naoyuki Oi.

Matchroom Multi Sport Managing Director Emily Frazer said: “We’re delighted to welcome the APF 9-Ball Asian Open to our Nineball World Ranking schedule. The tournament offers a fantastic opportunity for players in the Southern Hemisphere the opportunity to earn vital Nineball World Ranking events which shape the backbone of Matchroom Events and will be the future of Nineball and Pool. Whilst filling the calendar with European events is great, we have been concerned about the travel constraint for players based in Asia and potentially non-eligible for Nineball ranking points, we hope it’s the first of many ranking events in Asia for us. These rankings points will prove vital for players looking to play at the highest level and playing for the biggest prizes. It’s becoming more and more lucrative to play Nineball.”

“Asian Pool Federation Limited( APF) is thrilled by this exciting collaboration with Matchroom Pool which will undoubtedly enhance and reinvigorate #asianpoolwith the introduction of the Nine-ball World Ranking points for the APF Asian 9-Ball 2022 tournament “ – Christopher Chuah, President and Founding Member of APF.

The tournament joins the PRP Nineball Open that was added to the Nineball World Ranking schedule last week. PRP Billiards will promote the 128-player tournament in Zaragoza, Spain from September September, 14 to 19.

The top player from each team from the Live Nineball World Rankings will be selected after the conclusion of the 2022 European Open Pool Championship at Hotel Esperanto Fulda, August 9-14 2022.

A further two players for each team will then be taken off the Live Nineball World Rankings after the conclusion of the 2022 US Open Pool Championship at Harrah’s Resort, Atlantic City from October 10-15 2022.

Both Team Europe and the USA will then have two wild card picks each as selected by the two respective captains Alex Lely and Jeremy Jones.

Find out more on the new global nineball world ranking system. The rankings are the new cornerstone of the game globally to recognise Nineball as the primary discipline of pool, sanctioned by the World Pool-Billiard Association. The establishment of the Nineball World Rankings propelled Matchroom’s further commitment to the growth of pool globally.