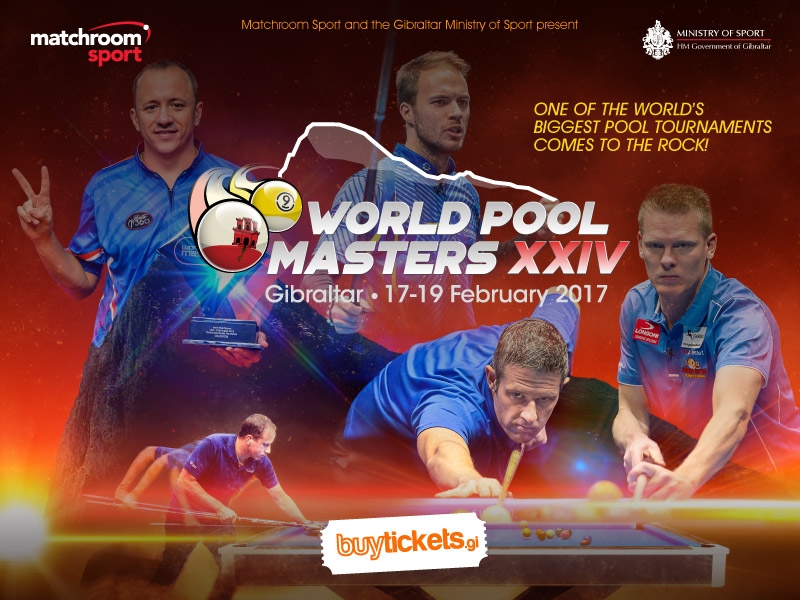 WITH THE 24th ANNUAL WORLD POOL MASTERS taking place from Friday to Sunday 17th – 19th February at the Victoria Stadium, Gibraltar, Matchroom Sport can announce that tickets for the event are now on sale.

With five sessions of play in total, all tickets are available from https://www.buytickets.gi/events/world-pool-masters-2017-87

With a field of 16 of the world’s top pool shooters coming to Gibraltar to chase the $20,000 top prize, eight of the stars competing can be named today.

They include the defending champion on the hunt for three Masters titles in a row – Shane Van Boening of the USA. Joining him will be two-time WPA World Champion Niels Feijen (Holland) and England’s recent Mosconi Cup hero Mark Gray.

Current European No.2 David Alcaide (Spain) will be competing as well as Scotland’s Jayson Shaw, arguably the best player in the world at the moment.

From Japan comes the highly-entertaining Naoyuki Oi, while two of the games living legends will be competing in six-time Masters Champion Ralf Souquet (Germany) and from the Philippines Francisco Bustamante. The remaining eight Masters competitors will be named in due course.

Commented Matchroom Sport Chairman Barry Hearn: “It’s looking like a great line-up for the Masters, and we’re very excited to be bringing these players from around the world to fight it out in Gibraltar. So far we’ve got some absolutely stellar names competing and when we announce the second half of the field, it will be of similar quality! ”