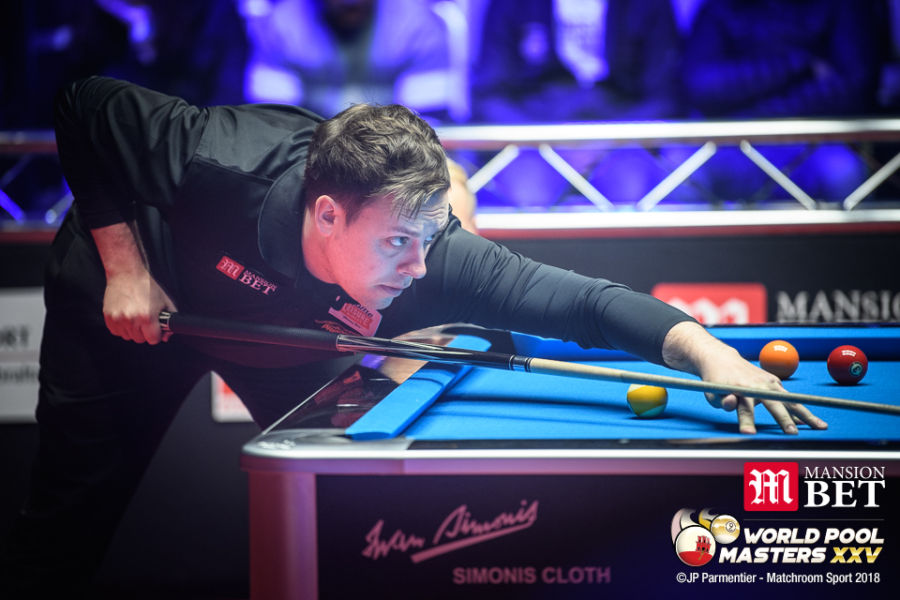 THE FINAL TWO first round matches concluded at the Victoria Stadium, Gibraltar and then Karl Boyes overcame a 7-1 deficit to overturn Ralf Souquet to become the first player to reach the last four of the 25th annual Mansion Bet World Pool Masters.

First out, in front of a big, enthusiastic crowd was Dennis Orcollo, who put in the most impressive performance of the tournament thus far as he dominated Chris Melling to win by 8-3. The Englishman was a late call up as he replaced Wu Jiaqing, arriving in Gibraltar in the early afternoon.

The much-anticipated clash between Mosconi Cup team mates Jayson Shaw and Josh Filler lived up to pre-match expectations as the Scotsman ran out an 8-5 winner. Filler moved into an early 4-2 lead and was looking good before Shaw took over in the winner-breaks format to win 8-5.

Said Shaw, “I am feeling good. It was a bit cold out there but I got settled in the match. My body is warm but my hands are freezing so it is weird. It is hard to feel the cue and feel my shots, so I am trying to heat my hands up when I can.

“The table is racking difficult. The refs are doing what they can but you just have to get up there and hit them as hard as you can.

“I had Joshua over at my house for ten days in January before the Derby City and we practiced and we drew each other in the first round there and the same happened here. We are both great players and either of us can win that match so I am happy to win because he is such a good player – he is the next star in the game.”

In the final match of the evening, Ralf Souquet looked all set to continue his quest for a seventh Masters title before Karl Boyes launched a huge comeback to dash his hopes in a hill-hill thriller.

When Souquet went into 4-0 and then 7-2 leads, it looked all but over but in winner-breaks 9 ball all things are possible. Boyes maintained the initiative to claw back the racks but at 7-4 down, he came as close to scratching without doing so and carried on to make it 7-5.

It became 7-7 and Boyes was breaking for the match. It was no road map and Souquet got back to the table but Boyes was always in control and he held on admirably to take the win.

Boyes was stunned by his performance and the outcome of the match; “I didn’t know I could perform that well under pressure, I was shaking on that last rack. I under hit the 7 ball and thought I was going to miss that 9.

“It was one of those crazy matches I suppose, but it was nice to come back and get the win and book my spot in the semi-finals. After that I don’t care if I play Ronnie O’Sullivan, it doesn’t matter after that match.

“Obviously I got a last-minute spot, but I didn’t come here to lose. I want to win and now I’m in the semi-finals so who knows.

“I played a bad kick shot in the first rack, and I didn’t get out of my seat until the fourth rack and had a real go at the table. I don’t really know what was going on with the break shots, I was just deciding to smash them as hard as I could and managed to get a bit of luck at the end. I wanted to attack the table rather than going out playing stupid safety shots.”