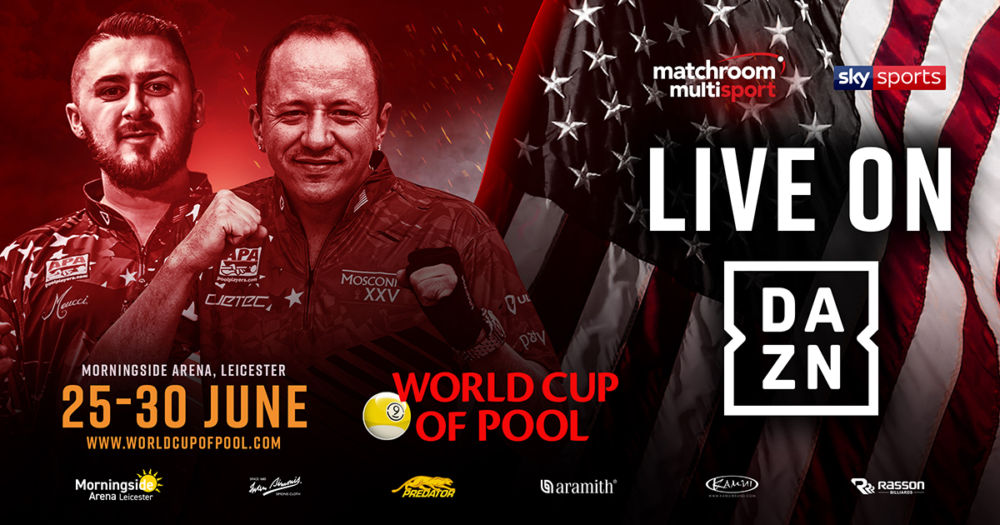 WORLD CUP OF POOL LIVE ON DAZN IN AMERICA

The World Cup of Pool, 9-ball’s biggest doubles tournament, will be broadcast live in America on the global sports streaming platform DAZN this June 25-30, Matchroom Multi Sport is pleased to confirm.

Mosconi Cup winners Shane van Boening and Skyler Woodward, who were World Cup silver medallists two years ago, will once again represent America in the prestigious $250,000 event. Van Boening was a member of the team when USA last won the World Cup in 2008 and has been ever-present for the Stars & Stripes since.

The World Cup of Pool brings together the very best players from across the globe in 32 two-man teams. Leicester, England hosts this year’s event as China bid to become the first nation to successfully defend a World Cup title. They’ll have to fend off one of the best doubles fields ever assembled with the likes of Great Britain, USA, Philippines, Chinese Taipei and Germany among the powerhouse nations desperate to land the title.

As well as broadcasting the event live across America, DAZN will also show the World Cup of Pool live in Canada, Brazil, Germany, Austria, Switzerland, Italy, Spain and Japan.

Matchroom Sport Chairman Barry Hearn said: “The World Cup of Pool is a 9-ball major and we are delighted that American fans will be able to watch live anytime, anywhere on DAZN.

“The World Cup is one of the must-see 9-ball tournaments of the year, and with a stellar line-up of players we know this will be one of the best ever. China are defending champions and undoubtedly have some of the best billiards talent in the world, but Germany have the US Open Champion Joshua Filler, USA hold the Mosconi Cup, and Team GB will have the home crowd on their side. Every team playing will believe this can be their year to lift the trophy.”

Live coverage of the World Cup of Pool will begin at 8:30am Eastern Time on Tuesday, June 25 with two sessions per day until the final on Sunday, June 30 which begins at 2pm Eastern.