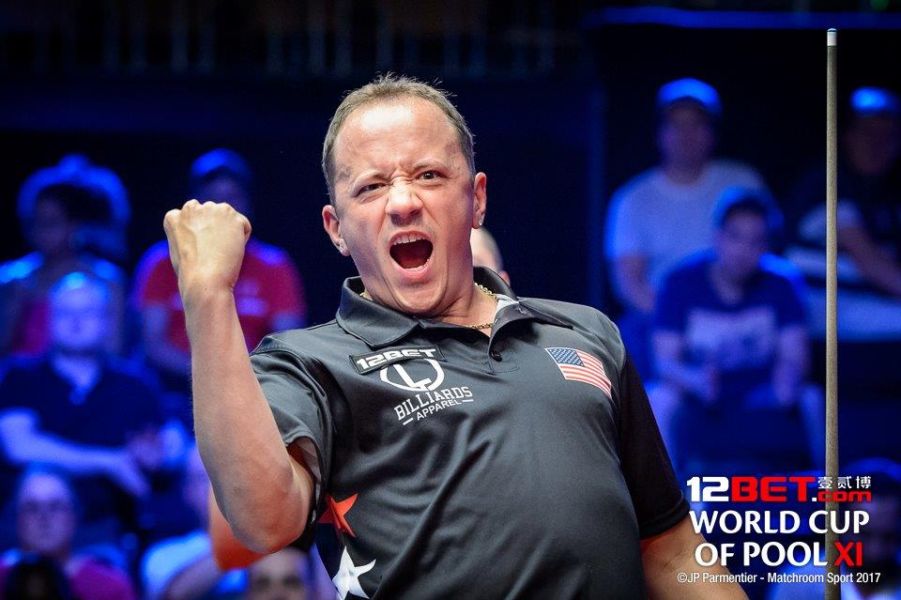 IT WILL BE USA v AUSTRIA who contest the final of the 2017 12BET World Cup of Pool as they both scored surprisingly straightforward wins against top opposition inside a sweltering York Hall on Sunday afternoon.

With a $60,000 prize awaiting the champions and it will be Austria’s first final in the event’s 12-year history. The USA on the other hand have reached the final twice, losing to the Philippines in the event’s inaugural year – 2006 – and then winning two years later in Rotterdam with Shane Van Boening and Rodney Morris making up the victorious team.

It was Van Boening accompanied by Skyler Woodward who flew the flag this year and they took hold of the semi-final match against defending champions Chinese Taipei and never really looked back.

The Taiwanese had lead 2-1 but then the US axis reeled off four straight racks to create some space and it was a gap the Asians could never close.

Commented a delighted Van Boening, “Oh man, I am very happy to be in the final – specially to win against the number one seed is just unreal. I am proud of Skyler

“The biggest save we had was that they weren’t breaking very well – they had two foul breaks.”

Featuring 32 two-man teams from around the globe, the 12BET World Cup of Pool is into its 11th year as reigning champions Chinese Taipei attempt to become the first team ever to successfully defend the title in the $250,000 event.

Despite having team containing reigning World 9 Ball Champion Albin Ouschan and current European No.2 Mario He, Austria were a big underdog against the Chinese pair of Wu Jiaqing and Dang Jinhu, who had looked unstoppable throughout.

It didn’t pan out that way as the European pair dominated throughout as they romped home 9-1 winners to book a final berth against the USA.

“We are much happier with our performance today than we were yesterday,” said Ouschan.

“We only changed our shirts! We were a little bit more relaxed, played a little bit faster, didn’t talk much with each other and just played our own game. We had fun and stayed cool and calm.

“Last year when we lost to Chinese Taipei in the quarter-finals, I said to Mario that this year we would win it.

Play continues on Sunday evening with the finals: