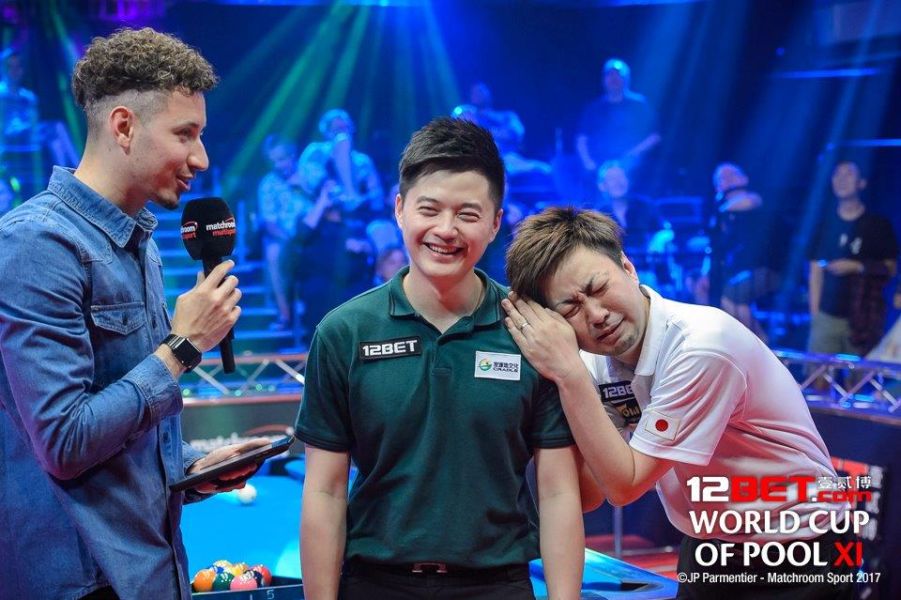 USA AND CHINESE TAIPEI are both in the medals as the first two quarter-finals of the 12BET World Cup of Pool took place at the York Hall, East London. With the longer race to 9 racks in play, both successful teams pulled away from their opponents as they secured comfortable victories.

Defending champs Chinese Taipei are on course for a repeat as they coasted past Japan by a comfortable 9-2 scoreline. The duo of Ko Pin Yi and Chang Yu Lung are starting to find their form at a critical time and their strong breaking game was too much for Naoyuki Oi and Hijikata Haya.

They had only two break and runs but their safety play and shot-making enabled them to win seven consecutive racks to win the match.

Commented Ko, “I am very happy. We didn’t leave too much and didn’t make many mistakes and we were lucky on the break.

“Nobody has defended the title before but we believe we can do it. We both played well today and didn’t give Japan too many chances. It was our best performance of the week so far. We will keep working on the break so that we can keep getting better.”

It was a disappointing end to the week for the Japanese after their semi-final appearance in 2015. However, their main man Naoyuki Oi, was magnanimous in defeat; “Ko is super amazing, and Chang played well too – Chinese Taipei could be the champions again this year. We will come back again next year and we will train and we can win the title.”

In the second match of the session, Team USA – Shane Van Boening and Skyler Woodward – put on a text book display as they went from 2-4 down against the Finnish pair of Mika Immonen and Petri Makkonen – to a 9-4 win as they left their opponents rooted to their seats. In fact, Finland only got back to the table once more, but could not make the most of it.

2017 has been the USA’s best showing since their last winning year in 2008 and Van Boening looks to be firing on all cylinders, ably supported by Woodward.

Van Boening said, “We didn’t make any mistakes at the end and that saved us. When you come out here and play your best you don’t worry about who you play, you just shoot your best. I think whoever wins our semi-final will win the tournament.”

Play continues on Saturday evening with the second two quarter-finals: