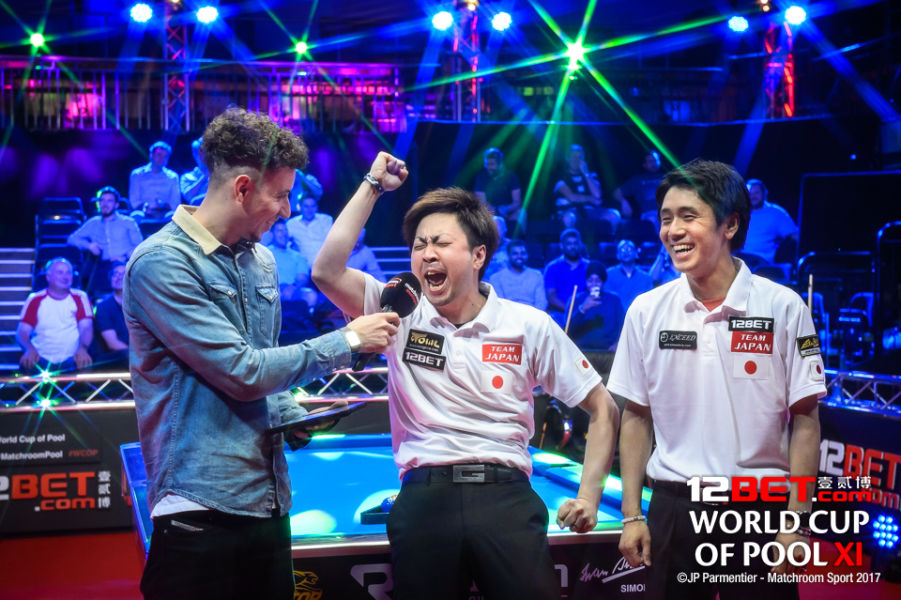 Japan and Finland first through to quarter finals

JAPAN BECAME the first team through to the last eight of the 2017 12BET World Cup of Pool as they enjoyed a comfortable win against Canada. There was also a second-round win for Finland as the USA closed out the first-round matches with a whitewash against Singapore.

The final first round match featured the American pair of Shane Van Boening and Skyler Woodward and they looked an excellent combination as they outplayed the Singaporean duo of Aloysius Yapp and Toh Lian Han. 7-0 was the final score – the fourth whitewash of the first round.

Commented Van Boening, “We played great and only made one mistake early on and we were able to take advantage of their mistakes. They didn’t perform well and they didn’t get the layouts on the table they would have wanted.

“I have played against Skyler in quite a few tournaments and he is a great player, which is why I decided to pick him as my partner.”

The second round started in earnest as Japan and Canada faced off in what was on paper a 50/50 match but it was Naoyuki Oi and Hijikata Hayato who were the better side. They lead throughout as Pagulayan and Morra could never catch up.

The final match of the evening saw Finland make their way to the quarter-finals as they beat a well-supported India 7-3. Raj Hundal and Amar Kang were a bit unlucky as they suffered an unlucky scratch off the break at a critical time and a few rolls went against them.

Finland though, looked a very solid unit, and a repeat of their 2012 victory in Manila, can’t be ruled out.

“We are happy to get over the hurdle but we had some trouble with a few dry breaks. Even though we were hitting the break pretty good it wasn’t opening for us,” said Immonen.

“We feel comfortable at the table and if we get the opening shot we are confident we can clear it every time. We have a little bit of a break now before the quarter-final, we will regroup and work on the break.”

Makkonen added, “We have played this event together as a pair for five or six years, we’ve won it together too. They chemistry between us is good.”

China, Holland and Austria through

Three more through to the last eight