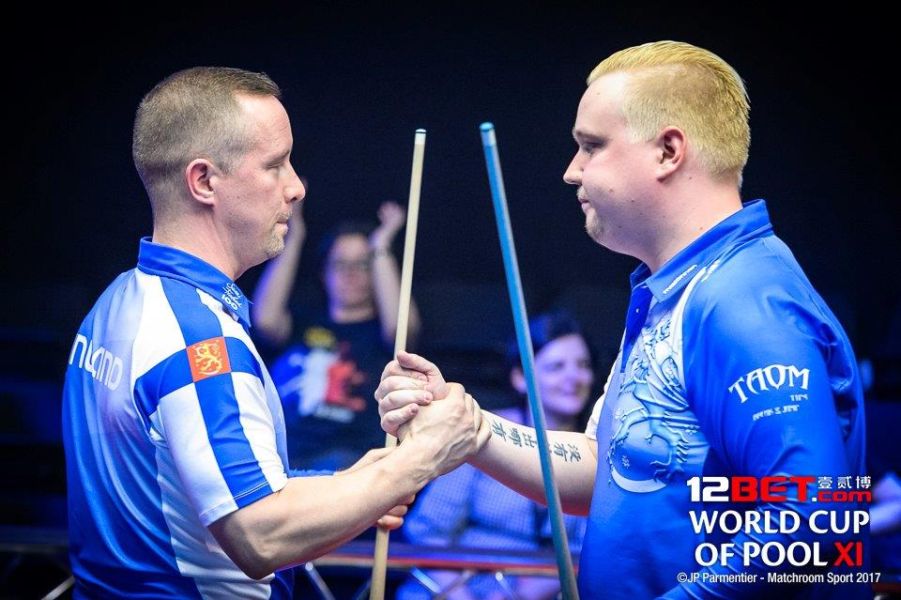 PREVIOUS CHAMPIONS Finland, who took this title in 2012, looked in solid form as they opened their 2017 12BET World Cup of Pool account with a 7-0 whitewash over Norway. It was the same pairing of Mika Immonen and Petri Makkonen that won back in Manila and they barely broke sweat as the moved past Mats Schjetne and Tom Bjerke.

Commented Immonen, “We got off to a rocky start with a few hiccups in the first rack but once we got over that hurdle we were pretty smooth. There is room for improvement but all-in-all I am pleased with the performance.

“We gave them a couple of opportunities but they weren’t able to capitalise. We aren’t fooling ourselves – it could have been 3-3 when it was 6-0. Norway are brilliant players but they need a little more experience and maybe the pressure affected them. We are here to win the tournament but at the same time it is one rack and one match at a time.”

Poland, who Finland beat in an epic final in ’11, looked dead and buried as they trailed 5-1 against the strong Greek pairing of Nick Ekonomopoulos and Alex Kazakis.

However, as weak as they looked in the opening stages, Mateusz Sniegocki and Wojciech Szewczyk, fired back as the Greeks floundered and in the end, they manged to upset the odds.

The final match of the session saw defending champions Chinese Taipei (Ko Pin Yi and Chang Yu Lung) defeat Kuwait by 7-3. The Taiwanese took the early lead but struggled to find their true form in the warm conditions in the arena. The Kuwaiti pair of Bader Al Awadhi and Mohammad Al Khashawi pulled three racks back but the defending champions had too much.