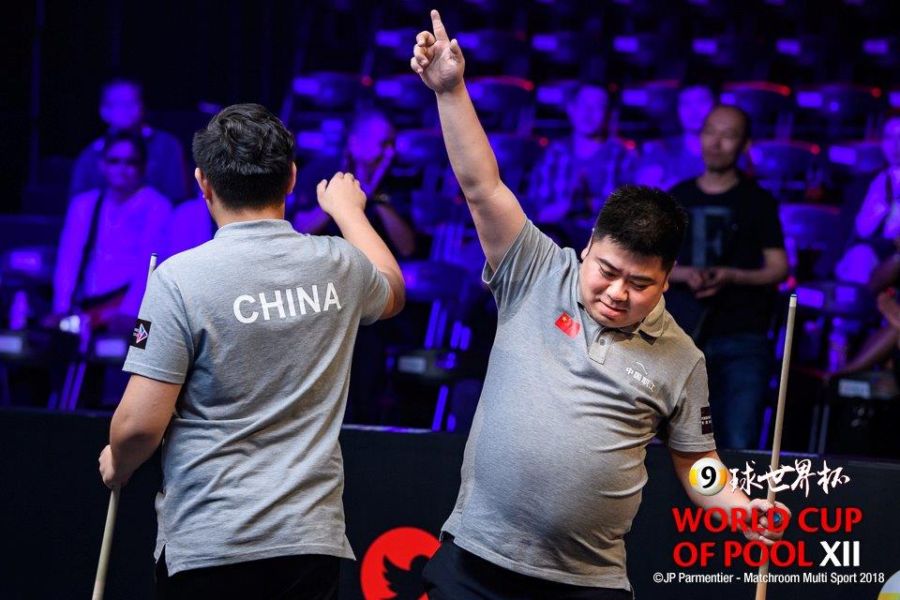 Austria and China B blast their way into semis

The first two quarter-final matches completed at the 2018 World Cup of Pool on Saturday afternoon and there were big wins for defending champions Austria and China B who can look forward to a highly anticipated showdown on Sunday afternoon.

The $250,000 tournament originated in 2006 and has since moved around the world before touching down in Shanghai. The World Cup features 32 pairs from across the globe including two from host nation China. Running from 15th to 20th May, the event is on live TV in over 100 countries around the world.
Mario

In the opening match, the Austrian pair of Mario He and Albin Ouschan looked very solid as they brushed aside Holland (Niels Feijen and Marc Bijsterbosch) to keep alive their hopes of being the first team to ever defend the World Cup of Pool title.

Wearing the exact same green shirts that saw them to the championship last year, the Austrian pair will be hard to dislodge as their game has picked up with each successive match.

Commented He, “We played really well at the start with three run outs and we felt we could go on like that. From 3-0 but we didn’t play really good and with the momentum of the 4-3 for us we got it a little back and we used it.

Ouschan said, “The match can turn twice or even three times and it did. I like it much better because on a race to 7 if you make a three or four pack it could be almost over. We both like race to 9 better.”

In the second quarter-final, unknown proposition China B continued their march as they dumped the highly-fancied Filipino pairing of Carlo Biado and Jeff De Luna by a 9-1 score line.

Kong Dejing and Wang Ming make an unlikely duo but they won through a tough qualifying event to make the line-up and they looked very much the part as they kept their opponents off the table.

The Philippines made their share of mistakes but could never really get back into the match with limited table time.

A delighted Kong said through an interpreter, “Yesterday we practiced really late because we knew we were facing really strong opponents and we had to work out our chemistry. We performed much better today.”

Wang added, “We never thought of this. It was better than our normal performance, so it is fantastic.

Down to the final eight in Shanghai

Austria, China A & B and Chinese Taipei are the final four in Shanghai