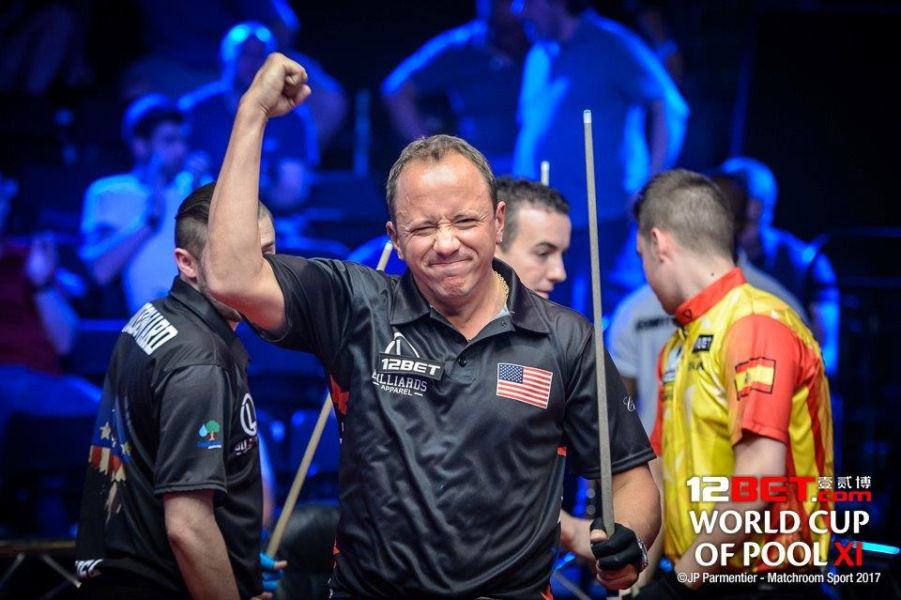 THERE WERE THREE more humdingers at the York Hall on Friday night as the second round of the 12BET World Cup of Pool concluded. There were wins for the Philippines, England B and the USA but each match was hard fought and went down to the closing stages.

In a high-quality match-up, the Filipino duo of Johan ‘Bubwit’ Chua and Carlo Biado edged past Holland in a game where all four players were up to the task.
There was offensive play and high-quality safeties and the close of the match rested on a miscalculation by Nils Feijen.

Earlier, the Philippines had opened up a 5-1 lead, but Feijen and Nick van den Berg had come back at them methodically to level it up at 5-5. Following van den Berg’s break, there was no shot on the lowest ball and Feijen pushed out, nudging the 9 ball.

He left a tough angled pot but Chua made it and the subsequent run out put the Philippines on the hill. In what was the final rack, Biado played a good safe and van den Berg clipped the 9 ball trying to escape. With ball in hand, the Philippines closed out the match.

The second match was an Old Firm classic as England took on Scotland for a place in the last eight. With an old-school noisy York Hall crowd bringing the atmosphere, both teams had great spells as well as made their share of mistakes.

The match went back and forth and at 6-6, England – Daryl Peach and Imran Majid – were breaking for the match. Majid delivered the perfect shot as balls fell and the remainder sat out in the open and Jayson Shaw and Pat Holtz could only watch as England ran out for the win.

Commented Peach; “It was nerve wracking, that is for sure. I struggled from the off there, I didn’t feel too good in myself and Imran held it together for us, he played brilliant – I thought he was awesome.

“It feels great, but it doesn’t matter that it is against Scotland. Both players are our friends and we will have a beer with them later. It is good to beat any team. We are into the quarter-finals now, we will regroup and come back stronger tomorrow.”

In the final match, Shane Van Boening and Skyler Woodward kept the Stars and Stripes flying as the got the better of a string Spanish side in David Alcaide and Francisco Sanchez Ruiz.

Van Boening said, “It means a lot. I made a couple of mistakes but Skyler saved us. He shot great, he didn’t really make any mistakes. We have been working together a lot, working on our break and if we can be careful with the cue ball we should be okay.

“I am looking to win the tournament again, I would love to win it two times. It has been nine years since I won it and it would be fun to win it with Skyler.

Woodward, “We broke well but a couple of times we didn’t get shots. Shane struggled a little but we played well overall, even though we made a couple of mistakes.

“It would be huge if we can win this. It is my first time playing this and I haven’t won something worldwide so it would be amazing to win, and to win with Shane – he is a guy I have looked up to my whole life.

“I like it in London, it is crazy – if you make a ball the fans scream and if you miss they scream, it’s stupid crazy, it is awesome!”

Play continues Saturday with the two quarter-finals in the afternoon and two more in the evening:

Three more through to the last eight