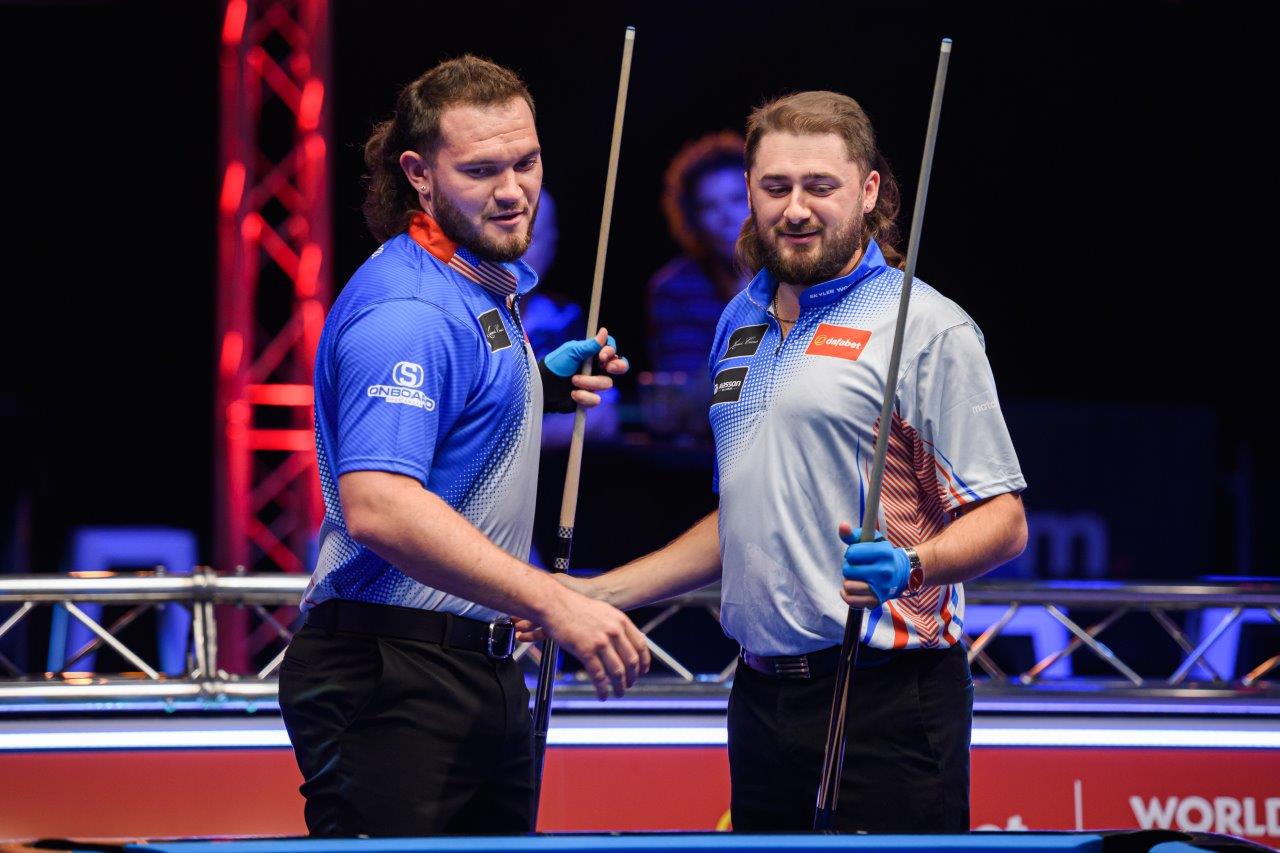 Skyler Woodward inflicted a 7-1 defeat on Mosconi Cup teammate Billy Thorpe to advance to the last 16 of the Dafabet World Pool Masters, while Justin Sajich, Eklent Kaci and Chris Melling also progressed on the opening evening of play at Europa Sports Complex, Gibraltar.

With fans returning to the Matchroom Pool arena for the first time since the start of the Covid-19 pandemic, those lucky enough to have a ticket were treated to a top-class evening of pool.

Sajich registered a 7-3 win over Women’s World Champion 7-3 before Petri Makkonen suffered the same reversal against Kaci. Melling beat Sanjin Pehlivanovic with the performance of the night, a 7-4 win against a debutant who acquitted himself well.

In the evening’s opening match, Sajich ran the second rack after coming out on top of a safety battle from Fisher’s break in the first. The Australian looked set to lead 3-0 but missed the 9, allowing the Women’s World Champion to half her deficit.

Sajich took the fourth but broke dry and Fisher was back to within one at 3-2 down. However, she was soon three down after Sajich won the sixth and made a golden break to go 5-2 up thanks to a kick from the 3.

The Australian reached the hill after Fisher couldn’t bank the 4 to safety after a great jump on the 3. A brilliant 1/9 kept Fisher in it but the 4 thwarted her in the next, and Sajich cleared the table for a 7-3 victory to set up a last-16 clash with Greece’s Alex Kazakis.

The following match saw Eklent Kaci storm to a 5-0 lead over Petri Makkonen. The Finn got on the board with a great 5/9 carom and cut the gap further to train 5-2. However, Kaci took the next to reach the hill and a great cut on the 2, with plenty of side to reach the 3, set the Albanian on the road the last 16. However, he missed the 3 in the tight four-inch pockets and Makkonen was able to reduce the score to 6-3.

The match was over in rack 10, though, as Kaci took his chance to close out the win and book a last-16 match against Naoyuki Oi on Sunday evening.

Chris Melling, like Kaci before him, took control of the early exchanges against Sanjin Pehlivanovic, who was making is Masters debut. The Yorkshireman was quick to gain a 4-0 advantage and despite losing the fifth, his four-rack lead was restored at 5-1.

The Bosnian started a comeback at that stage, winning three consecutive racks to bring the scores to 5-4. Melling won the tenth to reach the hill with breathing space, and the break and the former Mosconi Cup MVP won the match thanks to the shot of the night, a brilliant 2 in which he hammered the cue ball back off the bottom rail for position on the 3.

“I got off to a good start but then Sanjin came back well,” said Melling “I potted some good balls and I am delighted to get through. I was very nervous and the pockets are a lot tighter than normal, so when you are playing the ball with force you can miss them, but luckily for me they went in.”

The evening ended with the much-anticipated all-American affair between Mosconi Cup and World Cup teammates Woodward and Thorpe. Thorpe took the first but Woodward dominated the next four; Thorpe should have taken his opponent’s 3-1 lead down to 3-2, but a simple 4 missed to the middle meant Thorpe lost the table and Woodward was 4-1 ahead.

The Ohio man had a chance again in the next but got hooked behind the jaw of the middle pocket with only the 8 and 9 left. After jacking up in an attempt to get enough cue ball movement to make the 8, Thorpe left it on for Woodward, who removed the remaining balls for a 5-1 lead.

Thorpe missed a long 3 in the next, again hitting it too hard. Woodward wasn’t perfect in the match, but didn’t need to be and cleaned up each time Thorpe made a mistake. However, he wasn’t given another chance as Woodward, breaking on the hill, controlled the table for a 7-1 win and a last-16 meeting with defending champion David Alcaide.

The Dafabet World Pool Masters continues on Sunday with two sessions. The afternoon session begins at 12:00 local time (CET) with matches including Niels Feijen vs. Jeffrey De Luna and the first of the last 16 matches; Chris Melling against Joshua Filler.

The event is broadcast globally including on Sky Sports, DAZN and Zhibo.tv. Coverage is available on Matchroom.Live in nations without a TV broadcaster. Full details can be found at www.matchroompool.com.

PREDATOR TO PROVIDE OFFICIAL TABLE OF THE WORLD POOL CHAMPIONSHIP