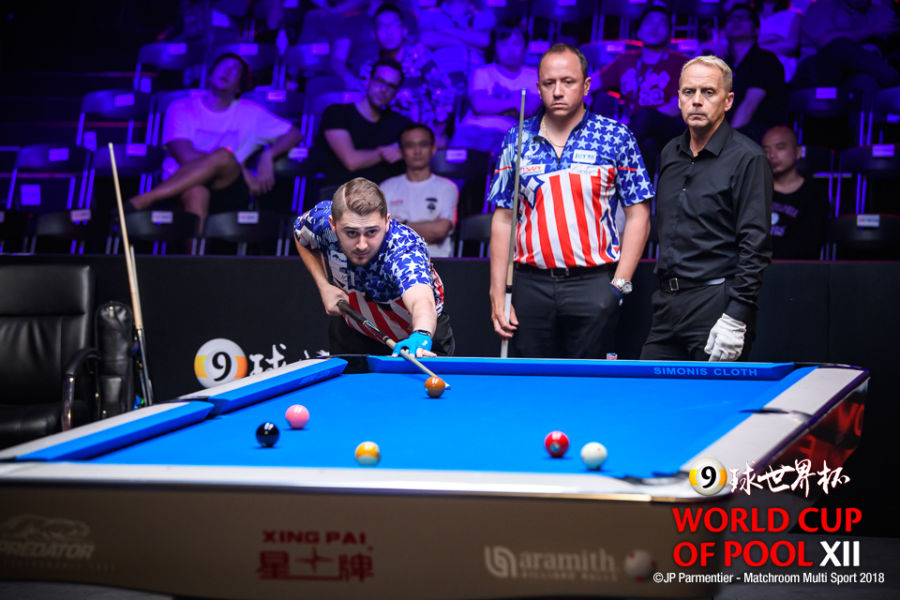 The three evening session matches went true to the seeding as Greece, England and the USA enjoyed victories in the opening round of the 2018 World Cup of Pool at the Luwan Arena, Huangpu District in Shanghai.

The Greek pairing of Nick Malaj and Alexander Kazakis whitewashed their Hong Kong opponents 7-0 and looked in excellent shape as they look to mount a realistic challenge for the title. Hong Kong by contrast looked relative novices as they struggled to make an impact.

England eased into the second round where they will play the Philippines after a comfortable win against South Korea. Mosconi Cup veterans Imran Majid and Mark Gray had the match under control as Jeong struggled to keep him cueing arm under control.

Commented Imran, “It is great to get the W in the first match. We had some help from them, they missed two or three balls.”

Gray continued, “We both played well, until the last rack none of us had missed a ball in open play. English players pride themselves on not missing shots, I know that’s not what the game is about in general but in a short race to seven you can’t afford to be missing balls and not taking out clearances.

“Me and Daryl Peach beat Philippines en route to the final a few years ago. They are one of the biggest nations in pool so we know we are in for a tough time and we will be underdogs but I like being the underdog.”

In the final match, the USA pair of Shane Van Boening and Sky Woodward enjoyed a tussle against Singapore as they bumped their way over the line with a 7-5 win. Breaking at 5-5, the Singaporean pair of Toh Lian Han and Aloysius Yapp were favourites for the win but Woodward stepped up a bit after a shaky early part of the match.

Van Boening said, “I travel all over the world and the first match is always the toughest – you have to get use to the atmosphere and get more comfortable and after we won we have a day off now so we will think it over a little more and do the best we do.”