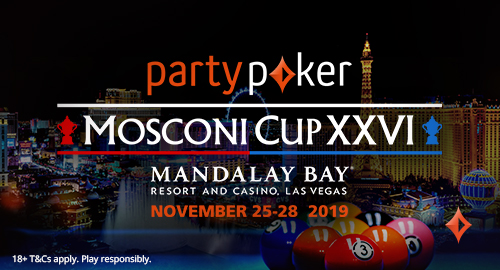 partypoker are proud to sponsor the 2019 Mosconi Cup as part of a three-year deal with Matchroom Sport this November.

Considered the ‘Ryder Cup of Pool’, the transatlantic nine-ball tournament has been contested annually between Europe and the US since its inception in 1994.

To mark the sponsorship, partypoker yesterday launched a special promotion exclusive to Matchroom Sport customers that will award three VIP prize packages to this year’s 26th edition, each worth $4,700.

To be eligible, Matchroom Sport customers must opt in and play at least three SPINS games (minimum $1 buy-in) within a qualifying period. One winner will then be drawn at random by Matchroom following the conclusion of each period.

In 2018 the US famously put an end to Europe’s stranglehold on the event to take the title back to the States, following an eight-year period of unchecked dominance enjoyed by their rivals.

Alternating host venues between the UK and the US, the Americans will be looking to defend their title on home soil as the event makes a return to Las Vegas and the Mandalay Bay Resort and Casino from November 25-28, 2019.

Captain, Johan Ruijsink, along with teammates Shane van Boening and Skyler Woodward, are among the names already confirmed for the holders, with Ruijsink’s opposite number, Marcus Chamat, returning for the Europeans.

Matchroom Sport Chairman, Barry Hearn, said: “We are thrilled to be continuing our long-term relationship with partypoker as title sponsor of the Mosconi Cup. This is an exciting way to celebrate our partnership and a great opportunity for fans to win a special prize and join us at Mandalay Bay Resort and Casino Convention Centre for one of the standout weeks of the sporting calendar.”

partypoker Managing Director, Tom Waters, added: “We are delighted to renew our partnership with our friends at Matchroom Sport in support of the world’s premier pool competition, and we look forward to another world-class spectacle of pool played out in one of the most exciting cities in the world.”

For more info on the promotion exclusive to Matchroom Sport customers, see here.