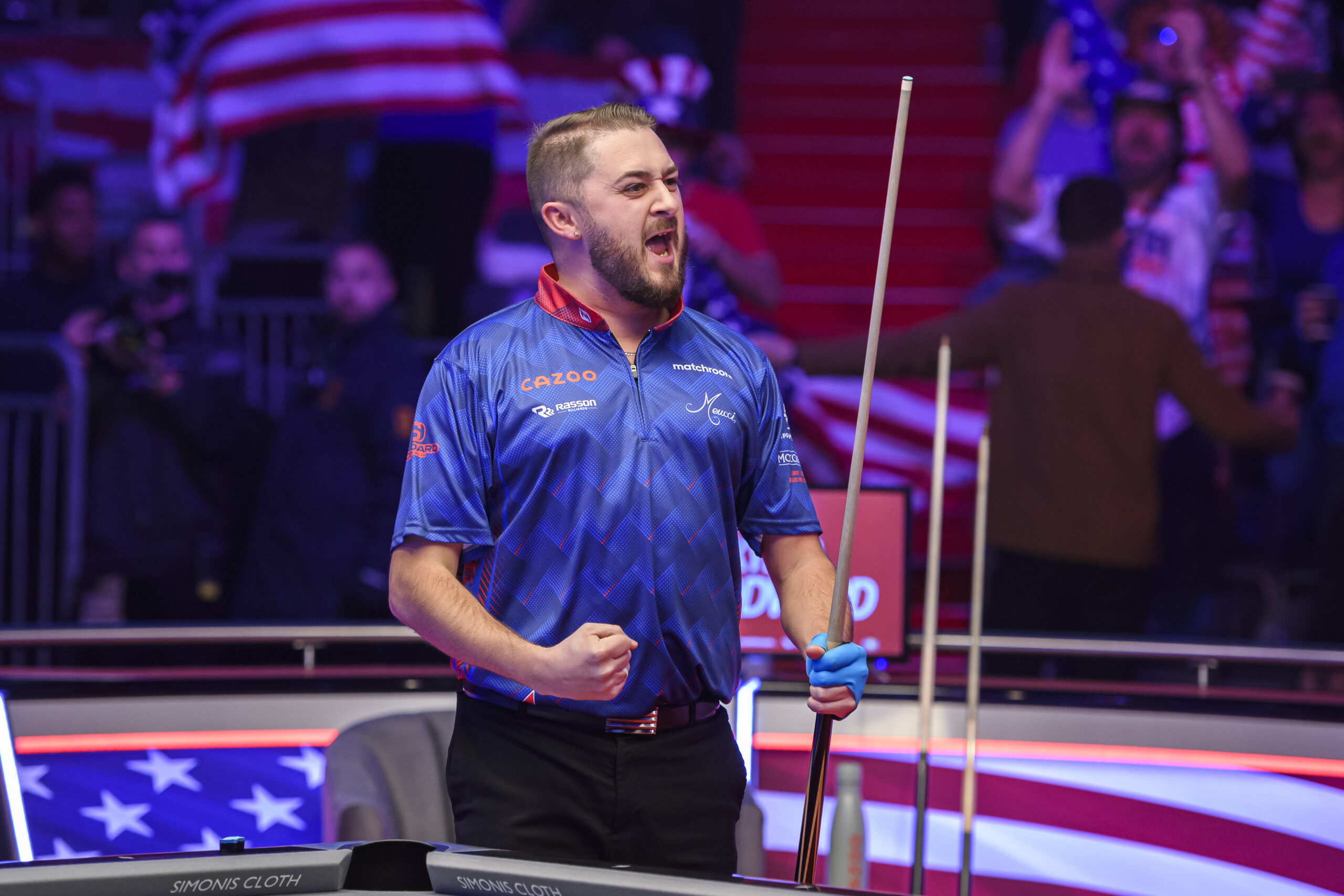 Team USA take a slender one-point lead going into the third day of the 2021 Cazoo Mosconi Cup at Alexandra Palace, London at 5-4.

Van Boening raced into a quick two-nil lead breaking and running in the opener to set the early tone for the American. The USA vice-captain found himself having to cut the seven to run out the third rack after getting back to the table, but he failed to do so putting Shaw on the board at 2-1. Shaw was gifted the fifth rack which saw him hit the front for the first time in the match after Van Boening had scratched off the break leaving the Eagle Eye to clear up.

No sooner had Europe established a lead, the USA responded with Skyler Woodward downing World Champion Albin Ouschan despite the Austrian’s best efforts including making five off the break in the fourth rack at 2-1 down. Woodward was gifted an opportunity in the fifth rack after Ouschan left the one ball in the jaws of the pocket as it rattled around. The American tide was coming as Woodward rallied making a 2-9 combo to put him on the hill at 4-3 before closing it out for a huge point as Woodward avenged his World Pool Championship quarter-final defeat to Ouschan from earlier this year.

Ouschan and Shaw joined forces against Van Boening and Woodward in what promised to be an eyewatering third match of the evening and it proved to be just that as the Americans edged it in a hill-hill finish. The shot of the match came in the seventh rack as Woodward banked the three-ball slotting it between the seven and the eight and his delight was shown with a yelp of ‘BOOM’ and ‘MONEY’. The USA were pumped and fought off a late European charge to put the USA back in front at 4-3.

Tyler Styer’s first encounter of the night came against the imperious Joshua Filler where the contest ebbed and flowed before Styer got a tight grip on things to win 5-3. Filler made a 5-9 combo to level at one-all after the German left a brutal safety for Styer to contend with which eventually caused the ball in hand that gave Filler the leveler. The third rack was one of the most dramatic of the cup so far as Styer looked to be at ease at the table before missing the eight ball on three separate ocassions before it rolled into the centre pocket on the third attempt to lead 2-1. Styer rode his luck at times but made the most of it pulling through to get the better of Filler and give the USA a guarenteed lead going into day three.

David Alcaide and Eklent Kaçi mounted a huge comeback from 4-1 down to defeat USA Captain Jeremy Jones and Chris Reinhold to close out the last session of the day. Jones’ experience was proving to be vital for the USA duo as he took Reinhold under his wing to race into a 3-0 lead. At 3-1, Kaçi left the two-ball hanging in the pocket after cueing over the rail handing the USA a chance to be on the hill. Reinhold found himself at the table with only four balls left on the hill, but it proved to be a costly miss on the five ball to pull Europe to hill-hill. That moment proved to be the USA’s last say on the match as Alcaide and Kaçi pulled off the comeback of the evening.

“We dodged a bullet again. We were looking to go 6-3 behind but Reinhold missed the ball and Alcaide and Kaçi showed a lot of heart and spirit and snatched that set away. We are now trailing; we lost the session which hurts. We’re under the gun and we really need to step it up tomorrow,” said Europe Captain Alex Lely.

“Albin was having a hard time. It shows you what the Mosconi Cup can do to a payer in a race to five. There’s a lot of heat out there and today Albin got caught by that. When Filler came in, we were hoping we could pull it back and get some momentum in our corner. There were some rolls for Tyler, but he played well. When the session is lost and then in the last match our two boys come out against Chris and JJ. Without disrespecting Chris and JJ. We were really hoping and expecting them to get it. Chris and JJ played some good shots and put them under the game. They had the win in their hands. They bottled it and we capitalised on that. It’s the sort of momentum and big point that you hope to capitalise on.”

“It’s very pleasing anytime you win the session. That’s the goal each day. You must be happy. Underdog favourite doesn’t matter in the Mosconi Cup. We’re happy with the win. The talent level that kid (Skyler Woodward) has, not only the talent, but he also doesn’t always express it a lot, he is very knowledgeable when it comes down to pressure and when it comes to the shot. What I should do at the time meaning him, he knows. Last year we lost a lot of hill-hill matches and lags. We turned that around already.” said Jones.

The 2021 Cazoo Mosconi Cup is Pool’s biggest rivalry as Europe and the USA meet over four days in a race to 11 points broadcast live on Sky Sports in the UK and networks worldwide including DAZN in Germany, Austria, Switzerland, USA, Brazil, Canada, Italy, Spain, and Viaplay in Scandinavia, the Baltics, and Poland. Action continues at 6 pm UK time tomorrow. Find out where to watch in your country here.

EUROPE RAMPANT AND CLOSE IN ON DOUBLE