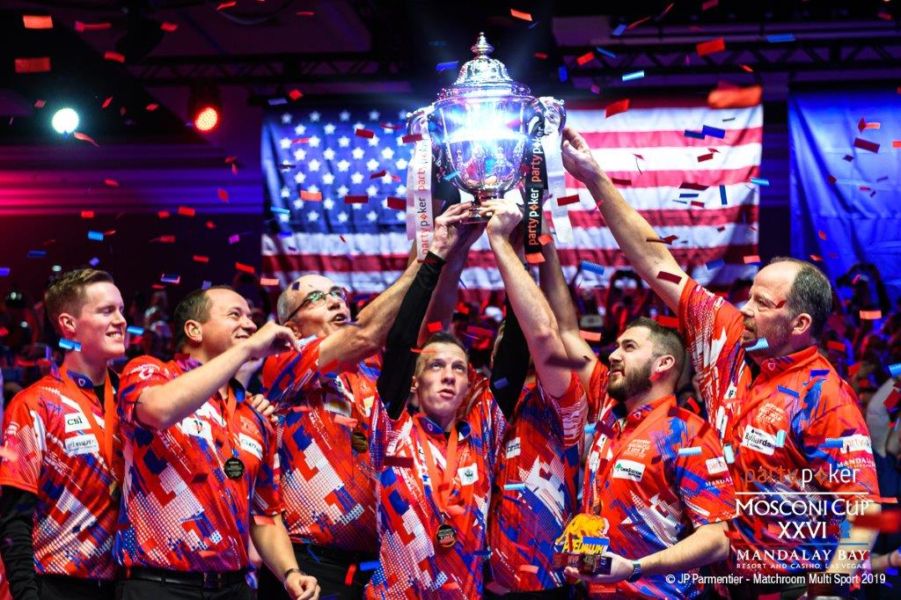 Team USA retained the partypoker Mosconi Cup with an 11-8 success over Team Europe on Thanksgiving at the Mandalay Bay Resort and Casino Convention Center, Las Vegas, live on Sky Sports and DAZN.

The American side, aiming to repeat their win in London last year, began the final day with an 8-7 lead and made an early statement of intent as Billy Thorpe beat Jayson Shaw, the decisive moment coming in the seventh as Shaw punched the 3-ball to the top pocket but saw it rattle the draw, allowing Thorpe to take the rack and run out for victory in the next. 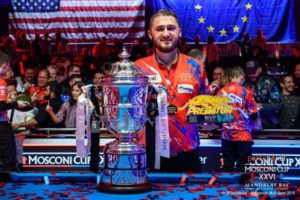 Eklent Kaci hit back in style for Europe, defeating Tyler Styer 5-1. Momentum swung back to the home side when Shane van Boening defeated Alexander Kazakis 5-3, taking America to the partypoker Mosconi Cup hill at 10-8.

Next up was Joshua Filler for Europe, with many expecting him to narrow the deficit. But Skyler Woodward relished the occasion and was celebrating with the crowd on their feet before he had even played the 5/9 combination for a 5-3 victory which sealed the cup and his own second successive Most Valuable Player title.

“Today I came out focussed, ready to play and I had a feeling I would be playing Filler,” said Woodward, who earns an invite to March’s World Pool Masters as MVP. “From the beginning I said I wanted to play Filler. 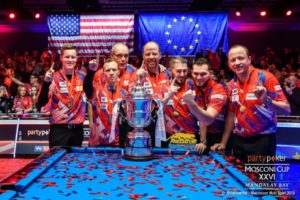 Thorpe added: “I knew I was going up against one of their best players, Jayson like Josh has so much firepower. I knew I had to come out, stay swinging and not let up on my stroke. We will be ready next year to defend the trophy. We will all be ready to go overseas and make it three years in a row.”

Justin Bergman, who would have faced Niels Feijen had Europe won another point, said: “I was ready to play but I told the guys to finish them off. I didn’t think I was going to play because I believed in them but I was ready if I was needed. This is the best team I have ever been on so I had a good feeling all week.” 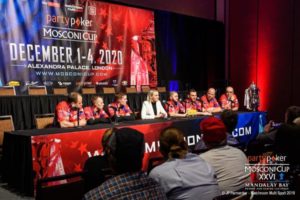 an Boening said: “It was 2009 the last time we won a Mosconi Cup at home, and without all the fans’ supporting we wouldn’t be here. This group is probably the best team I have ever played with. We have a great friendship, great chemistry and it is an unbelievable team.

Styer said: “This team has such a good balance, we all get along and there is no better group to do it than this. Johan has been getting us up early, doing everything together, and we are brothers now.

Coach Johan Ruijsink commented: “We had great support. Happy Thanksgiving! This was by far the hardest one to win. They had a great side, it is hard to be in America with all the pressure of winning last time. Last year was 9-6 on the last day but this time was 8-7 but we had a good line-up, came out strong and it was a good win.

“Last year was a bit of a surprise to Europe and we caught them off guard. This year they were prepared and we had extra pressure. This year was about handling the pressure, being in Vegas with all of its distractions and we came through. Every year will be a great fight every single year.

“I couldn’t have done this without Jeremy Jones. We are a great team. He is the perfect connection between me and the players and he has been in this arena as a player, which I haven’t.”

European captain Marcus Chamat said: “We came here to USA ten days ago. We have stuck together for the whole ten days, we came here as a team and we will leave here as a team. We stood beside each other the whole time and I am really proud of this team. Things weren’t going our way and Joshua put up some great performances. Without him it wouldn’t be 11-8.

“I want to thank all the fans, American and European fans, who have helped make this amazing event. The American players put in an amazing performance.”