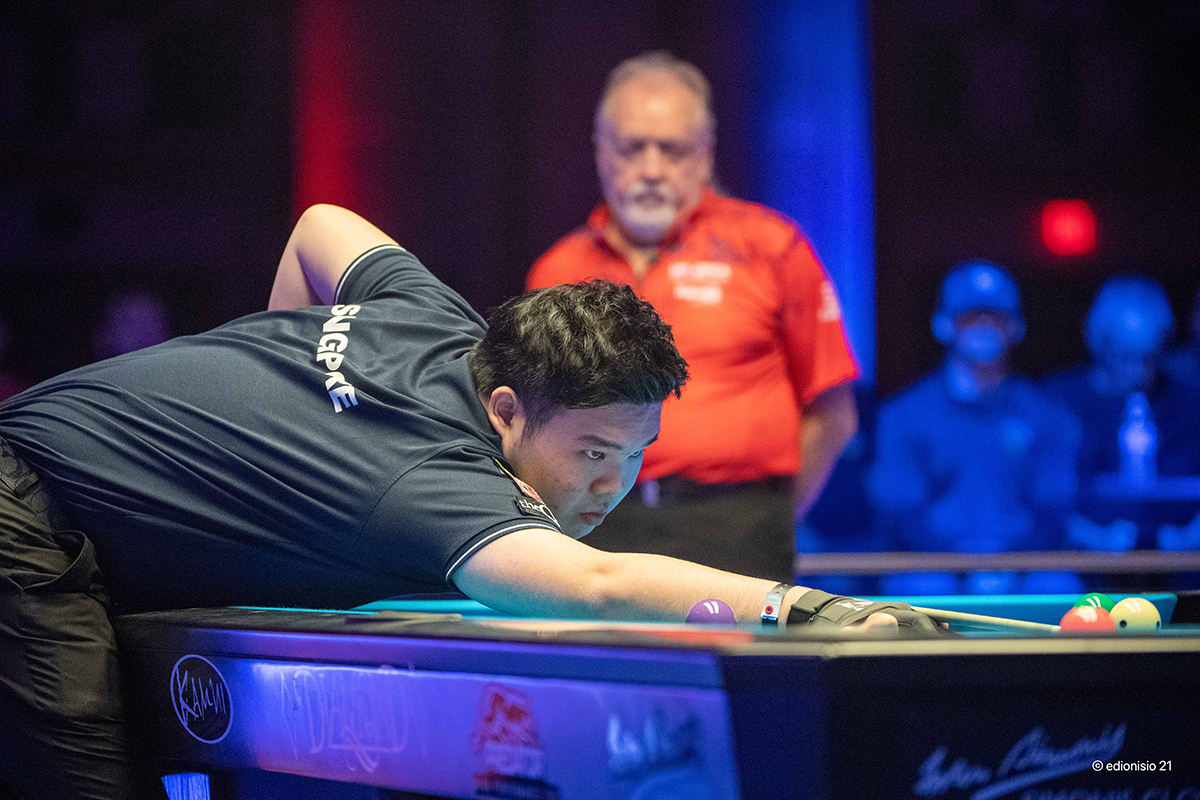 Home favourite Shane Van Boening is out of the US Open Pool Championship at Harrah’s Resort, Atlantic City at the last 16 stage as Singapore’s Aloysius Yapp secured a comprehensive 11-5 victory over the five-time champion.

Van Boening went into the penultimate day with eyes firmly set on becoming the most successful player ever at the US Open but Yapp came to spoil the party on the TV table winning the lag and proceeding to break and run in the opening two racks.

It was all one-way traffic as Yapp marched into a 5-0 lead before drama struck in the sixth rack when a discussion took place over whether a shot clock extension had been called before the clock was reset and Van Boening continued the rack.

Yapp continued his ascendancy to an eight nil lead where Van Boening finally got to show a piece of brilliance taking the ball around two rails after potting the one to get back in position for the table. The American made the next three racks to force a fightback but in truth, it was a tall order against a confident Yapp fresh off the back of finishing runner-up at the World 10-ball last week. He went on the hill at 10-3 before Van Boening took two racks but it wasn’t to be as Yapp sealed a place in the quarter-finals 11-5.

Max Lechner continued his impressive debut by being the first name into the quarters by beating Poland’s Mieszko Fortuński 11-4 to set up a tantalizing clash with Dennis Orcollo. Orcollo overcame Mario He 11-6 live on the Matchroom Pool YouTube as the Filipino joined compatriot Rodrigo Geronimo in the last eight.

Geronimo was involved in the biggest battle of the last 16 against Denis Grabe who was fresh off beating former champion Jayson Shaw. It went to hill hill with Geronimo fluking a safety with three balls on the table in the last rack.  Grabe scratched after hitting the seven leading to Geronimo having ball in hand to clear up and win.

After the first spectacle on Table 1, there was a lot for David Alcaide and Carlo Biado to live up to and they did just that in a thriller that saw Biado come out on top 11-10 in a dramatic contest. Punches were thrown from each side as they level pegged at various points from 1-1 to 3-3 to 4-4, 6-6, 7-7, 9-9 before going hill hill.

Biado had turned things around against Alcaide before nearly letting it slip at 9-9. A straight miss on the six put Alcaide back at the table who found himself breaking for the match in the last rack but the Spaniard found himself positionally out of sorts from the break as he missed the two ball as he tried to cut it.

Naoyuki Oi came from behind to beat Francisco Sanchez Ruiz 11-7 where it did look like at one stage Sanchez Ruiz would run away with it. Fedor Gorst meanwhile beat the last remaining Dutchman Marco Teutscher 11-7. Johann Gonzales Chua became the fourth Filipino in the last eight beating John Morra 11-8 despite a fightback from the Canadian late on.

Only four remain at US Open Pool Championship